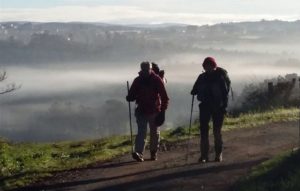 Walking with Rafael in the Galician morning mist

Globally it has been a challenging year of loss for many and a significant time of change and adjustment to how we live our lives. Victoria has moved into Stage 3 and 4 restrictions for 6 weeks through the winter and there is a sense of uncertainty about how the COVID pandemic will resolve.

The experience of travel and walking the Camino has been an important part of my later life and it’s hard to imagine not being able to return. There is also the dilemma of the environmental impact of air travel for us to walk in Europe that we are needing to consciously consider. It still doesn’t take away the yearning to walk with a pack on my back through the changing landscapes of an age old spiritual path and to share the journey with others. It’s a rich experience that requires personal intention and preparation as it takes us out of our comfort zone of home, family, friendships, work and community and also frees us of the demands.

My first Camino in 2004 was after my youngest child had left home where I explored the sacred sites of Mary Magdalene in France (including St-Maximin/La St-Baume and beautiful Vezelay) to embrace the journey of the feminine and to carry her energy with me over the Pyrenees and across the north of Spain. My final destination was Finisterre where I arrived on the eve of the summer solstice and felt cleansed by the pouring rain and blessed by the solstice energy. It was a significant ending that affirmed both my Christian and pagan roots that supported my connection to the deeper mysteries. It also fed the desire to return and walk again. 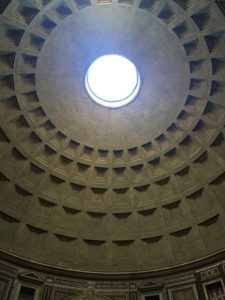 I have returned on three further occasions including at the end of 2016 to walk the Camino in winter which was encouraged by a Dutch fellow pilgrim from Central Victoria, Rob Jorritsma who, together with his wife, Ines Jewell, have supported and mentored many of us to walk on our chosen paths over the last 20 years. From our conversations I was aware that I may be walking through rain, mud and snow which was daunting as I am not an Alpine walker and dislike the cold.

My 2016-17 pilgrimage was a journey of the masculine which felt important to do as a way of engaging with this important male energy within myself and the need for bringing greater balance between the yin and yang energies in the world. I decided to start in Rome to revisit the early history of patriarchal Christianity that has negatively impacted both men and women from the height of the Roman Empire and the institutionalisation of the Catholic Church to contemporary times. I was seeking to find balance and integration to carry with me on my return journey across the north of Spain.

I enjoyed several days in Rome, an extraordinary city of living history, art and architecture where there is also a feminine energy as the name Roma suggests despite the dominating presence of ancient monuments including the Colosseum where bloody battles were staged with men, women and animals as a form of entertainment and a show of power over a 400 year period from 70AD. The beautiful simple structure of the Pantheon is a wonderful counterbalance to this with its specular design and huge central dome that has an enormous opening to the sky and was originally built as a temple of all gods in 120AD and then renamed as a church from the 7th century. 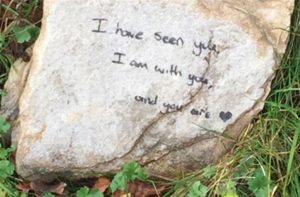 Nourishing words along the path

I then flew to Barcelona and travelled by train to Pamplona on the 10 December where I started my winter journey from the Puenta de Magdalena (at the entrance to Pamplona) to reconnect with my earlier pilgrimage of the feminine. The spirit of place definitely calls me to return time after time where I have continued to experience the forgotten and repressed stories within Christianity. This has primarily been through my own reading and the extraordinary art work in the many churches and museums along the way which is not available to us here in Australia.

The Camino de Santiago takes its name from the apostle St James who is said to have preached to the pagans in northern Spain around 40AD before then returning to Jerusalem where he was beheaded by Herod in 42AD although there is no historical evidence to support this. Sometime later his disciples are said to have returned his body to northern Spain where he is now buried in the crypt at the Cathedral in Santiago.

The early history of the Christian Camino dates from the discovery of the body of St James in 813 which was possibly orchestrated by the Bishop of Padrón as a positive focus for their battle against the Moors at the time.

John Brierley affirms my own belief and eloquently writes about the way of St James being a very important pagan pilgrim route from ancient times where there is significant archaeological evidence of sun god worship at Finisterre. It was not until the 12th–14th centuries that the Camino de Santiago grew in importance eclipsing the pilgrims’ routes to Rome and Jerusalem. I see it as a rich ancient path that weaves our early pagan routes into the tapestry of Christianity of which St James has been made an important part.

I was excited to be returning to Spain to walk again where the air was crisp and the small streams were often frozen. There were also occasional days with patches of warm sunshine. It was a gentle start through a landscape of fallow fields, bare grape vines and fruiting olives. Early on there was the adjustment to the weight of my pack that I gradually reduced over the following weeks and being the only woman on the path for days on end until I reached Burgos. The pilgrim numbers were small and the albergue accommodation was limited where it was necessary to share with groups of men which was a new unexpected experience.

There were several challenges that followed over the next couple of weeks that tested my will to continue. The first one was an injury from a fall in the shower on the 3rd day where I walked in pain particularly with the weight of my pack for the rest of the Camino. The second was on the eve of the winter solstice where I walked until dark to find accommodation at a very rustic albergue where the only option was to share the dormitory space with a solitary Spanish pilgrim struggling with his addictions. It was an unsettling night and I was happy to move on.

Early the next morning, soon after I left the small village of Atapuerca, I was greeted by the beautiful sound of tinkling bells of grazing sheep and a huge stone labyrinth on the plateau. It was the eve of the solstice and I mindfully embraced walking with my own mantra to the centre of the labyrinth and out again to celebrate.

Over Christmas I did take a needed break and made a detour for a few days to a beautiful place called Santo Domingo de Silos, south of Burgos, where the magnificent Gregorian chanting by the priests and monks was deeply nourishing. Continuing on from Burgos, the journey lightened as I embraced the openness and solitude of the Meseta. The pain in my body kept me focussed and where it often made it easier to walk alone. There were a few more pilgrims, mainly men as I realised that women would primarily be at home with their families at that time of the year. I was also aware that the Camino has provided a home and companionship for men who were struggling in their own lives.

It was a rich and varied time and I gradually learnt to relax and hold my own in the company of men. I did meet a couple of special men including a pilgrim from France called Dominique on his return journey to Paris. We had dinner together with the pilgrim group at the Espiritu Santo albergue in Carrion run by the nuns where there was a deep resonance about our shared connection to Mary Magdalene that had also inspired his own Camino. He spoke of a significant vision that he had 20 years earlier of Mary Magdalene at the Resurrection that he had only recently come to understand. We passed as ships in the night as our paths then took us in opposite directions. 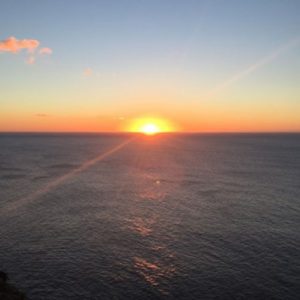 Sunset over the Atlantic

Then about a week later I had a rest day at a wonderful homely albergue at Foncebadon, a tiny village in the mountains near Astorga, where there was warm hospitality, great food, and a big open fire. It was here I also met Rafael, a warm and caring man from Argentina who lived in Madrid and who spoke English. It was a good starting point for companionship where we enjoyed some fun times with other pilgrims and local hospitality along the way. We continued onto Santiago and then Finisterre, arriving on the 17 January to the magic of the sun sinking into the Atlantic. Raphael and I kept in touch and he also visited Australia to travel… he very sadly died from a brain tumour in December 2019.

The words of the traditional Gaelic blessing were part of my Winter Camino where the wind was often at my back, the sun was warm upon my face and the rains fell gently upon the fields. I felt blessed!