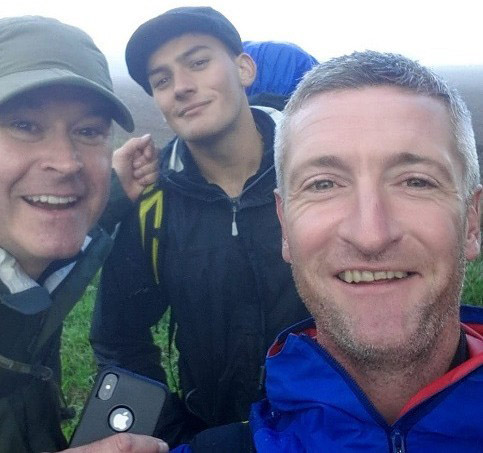 Peter and pilgrim friends
On my first Camino Francés I met a lovely Australian couple, David and Lynn, over dinner in Roncesvalles. They had previously walked the CF so had some knowledge of what I should expect. I told them my life had been a bit ‘colourful’ and I was walking to get some perspective of my home circumstances, and in the vain hope of spiritual enlightenment. I was tired, possibly a little lost, and must have appeared a little down. At the time I just thought that they had taken pity on me and were trying to cheer me up. What David said didn’t seem too relevant at the time, but fast forward a few weeks and his words almost became that of a Queensland prophecy. I must add that, although raised a Catholic, I’m a million miles away from being religious in any shape or form. So, here’s what he told me…

On their previous pilgrimage, although he was enjoying himself, he was slightly disappointed at first, as any hope of a spiritual experience seemed to be eluding both him and his wife, until a couple of weeks in. Then something happened. Something that he struggled to describe. Something out of his control. Something beautiful, energising, and pertinent to himself. He caringly told me not to worry, to be patient, and to basically give myself a break, as whatever one’s heart desires, the Camino will provide.

I come from a harsh environment and was struggling to shed that mindset so I was a little cynical of his words. I had a great time over the next 2 weeks or so, beautiful walks and scenery, and the most beautiful people imaginable. Then something happened. Something profound and life changing, and David’s prophesy of the Camino came true. And kept coming true.

Although it’s an ancient pilgrimage, I tried to steer clear from chapels, due to serious disillusionment with religion due to an almost militant Catholic upbringing. But one morning, tired, thirsty, and in need of shade, I ventured into a small chapel. I went to the front pew and internally said a few words (praying no less). It was only when I opened my eyes that I became aware that Ave Maria was quietly being played in the background. I could feel tears welling up in my eyes, something that had been happening ever more frequently over the last day or so. I hadn’t shed a tear for many years after the death of my baby daughter, so I pushed them down yet again. But at that instant I knew that the Camino was telling me that I needed healing. If you haven’t walked a Camino yet it might sound nonsense, but you’ll understand that the Camino ‘always provides’. I was incredibly self-conscious even though the chapel was nearly empty but I knew I had to let the tears fall in order to start addressing the hurt I silently carried with me every day.

Just as I tried to leave, an old nun, sitting at the back, beckoned me over. I was desperate to march past her as I felt like a complete fool but I didn’t want to ap- pear rude so I went over to her. Now, I spoke no Spanish, but whatever she said it seemed to go straight into my heart and soul. It all took mere seconds, but I found it excruciating and I was dying to run out and put my headphones in again to block out the noise in my head, but she gently took my hand and gave me a miraculous medal on a thin blue string. I thanked her in English and made to leave. Then to

my surprise I never ran away. I was greeted outside by my ‘Camino family’, but explained that I needed a few minutes to myself. So, then the most beautiful experience happened. Tears began to flood down my face and I was powerless to stop them. They weren’t tears of sadness but tears of healing and of happiness and they flowed and flowed for what seemed like an eternity.

For the first time in my adult life I felt true peace within. My mind finally felt still and calm. I was 40 at the time and had tried virtually everything to come to terms with who I was and things I had done, but nothing touched what I felt that day. It was beautiful and priceless, pure and honest. I knew the meaning of joy.

I was only out of rehab a matter of weeks (my 6th time) due to a heroin addiction that had lasted over 20 years. Walking the Camino was a long-time ambition since reading ‘The Pilgrimage’ by Paolo Coelho, but my true reason for walking the Way was I felt it was the last throw of the dice for me. My addiction had ruled me my entire adult life, after becoming addicted to prescribed codeine, before graduating to heroin and I knew unless there was some sort of spiritual change then I would die decades young at some point without ever having lived properly.

But something happened to me that morning. Something that even now I struggle to describe and since that moment I have never had the desire to use drugs of any form again. Doctors etc would no doubt be sceptical but I know in my heart the Camino healed and cured me from that day. The experience in the chapel was only the start of it. I went on to see and feel things I thought were impossible and when I laid my stone at Cruz de Ferro I felt euphoria more powerful than any drug. I knew I left my demons and pain on that hilltop and from there I not only walked the remainder of the way I also walked back to my family a changed man.

So the moral of this story is that the Camino will provide whatever it is you need. I was very sceptical of Aussie David back in Roncesvalles but on reflection, never truer words have I heard. Stick with it because something beyond our sphere of understanding happens to us on the way. I don’t know what it is, but I don’t have to. I just know that it happens and for someone who isn’t religious I truly believe that it’s a miracle that is there for all peregrinos. David and Lynn A., from the bottom of my heart, thank you. Your words were as accurate as a child repeating its mother’s name. I feel I have come home spiritually since the CF and I am honoured and privileged to be able to walk the Camino Portugués in June this year. Oh and by the way, I haven’t used a drug, or

even thought about using them, since that morning in the Chapel. Buen Camino my friends!

Peter (printed with permission but surname and location undisclosed)

EDITOR: We don’t know who Queenslanders Lynn and David are. Checking our records, it doesn’t appear that they have been members of AFotC, but their compassion, and Sunshine State warmth, has contributed to the above story.