The morning of Sunday 23 June 2019, the 22nd day of our pilgrimage from Dovadola, Italy to Rome, began in the Italian medieval hill town of Poggio Bustone.  As my husband David and I left the village at 8am to walk the 18km to Rieti, the local people were preparing for a religious fiesta to be held later that day.

After six kms we reached the village of Cantalice, had a coffee in the bar and then ascended the stairway behind the village to the piazza and fountain in front of the church of San Felice (St Felix). 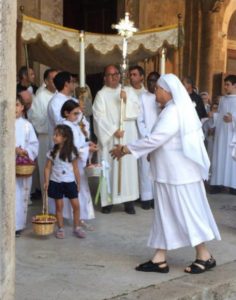 We were met there by a gathering of people beginning their celebration of San Felice and were given cake and juice.  The street leading off the piazza was decorated with patterns and religious images made with flowers.  A young couple from Rome who were visiting his mother’s village for the celebration chatted to us for an hour or two as they waited for the service and the procession which would follow.  We set off again when the service began, but it had been a real privilege to be there and share in the excitement and anticipation as the procession participants dressed in their simple costumes.

Arriving in Rieti about 4 pm, the streets around the church were closed to traffic in advance of the city’s preparation for the Festival of Saint Antonio da Padua (St Anthony of Padua).  Although not the patron saint of Rieti, the city has a strong affinity with Saint Antonio.  On the closed streets, groups of people were making the beautiful floral images called infiorate . 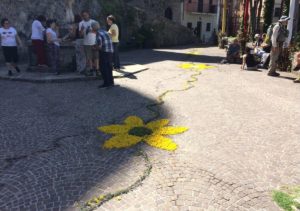 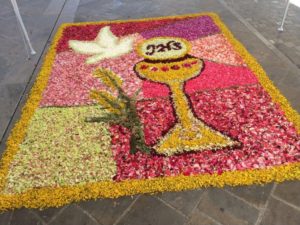 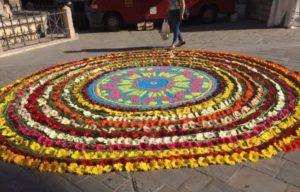 We checked into the lovely old Grande Albergo Quattro Stagioni, showered, did our washing and rested.  About 5:30pm we were awakened from our siesta by a brass band playing in the piazza. We quickly rushed out to listen to the band playing outside the church, then followed the local people into the beautiful Duomo of Rieti for the mass. The church was packed, and the mass was wonderful, very formal with a choir, an organ and lots of incense.

The procession carrying the statue of the saint emerged from the church led by children dressed in white with baskets of flowers, strewing the flowers onto the street. The procession was followed by the congregation spilling out of the church. David and I followed the procession along the people-lined streets.  The followers must be very careful to make two lines, either side of the infiorate, so as not to walk over the flower pictures, which can only be trampled by the Saint.  The procession walked about 3 km through the old town, acknowledging the other churches and sanctuaries along the way. As the following crowds fell away, and we found ourselves closer to the front, we were very humbled by the sight of the town’s people paying their respects to the Saint as the procession passed by.  The procession returned to the church and the festival continued with a band and food vans on the piazza, and fireworks later in the night.