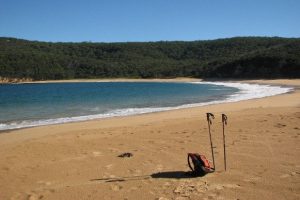 I am well qualified to write a ‘dummies guide’ because a year ago I knew nothing about starting a group/club and, as for Facebook, I wanted nothing to do with it. But I did have a fair knowledge of walking Caminos and had also walked most of the paths in National Parks or Reserves on the Central Coast.

Between my first Camino in 2010 and last in 2015, I walked all or part of the Camino Francés from St Jean to Santiago 4x, as well as walking the Caminos Aragonés, Portugués, part of the Via de la Plata and the baby Finisterre, and had been a hospitalero at Casa Fernanda albergue on the Portuguese Camino and San Miguel Parochial Albergue in Estella on the Francés. Also I attended most of the meetings of Pilgrims in Sydney (a 2 hour drive) and of the Blue Mountains Camino Group (3 hours away), and read the daily Forum, so I suppose you could say I was a Camino tragic. But after 2015 my Camino days were finished.

So I began to think of forming a Camino group on the NSW Central Coast andI thought surely there were more Caminoites who lived north and further from  Sydney. To be frank, I did not want to start a group as I knew that it would be a lot of work, and I tend to be more of a supporter than a leader. I knew very little about Word and Excel, and next to nothing about Facebook. I procrastinated for 2 years, during which I investigated the idea of costly lunch/dinner meetings.

Suddenly in July 2017 a flyer arrived for a Camino film due to be shown at our local picture theatre in 8 days time. If I was to ever start a group, this would be the time. I discussed my idea with Sandra and Julie from the Pilgrims in Sydney group who enthusiastically supported me. I got permission from the theatre manager to set up an information table in the foyer, and they suggested that I give a short talk at the end of the film, together with a few slides. Now I was committed, and everything was moving fast with no decision made on the format etc of the meetings. 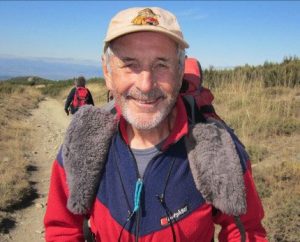 David on the Camino Francés in 2011

Quickly I decided that, in the spirit of the Camino, it would be run on a minimal or no cost basis, meetings would be monthly and would not clash with the Sydney or Blue Mountains groups, and the format would be friendly and informal – a bush walk of around 2 hours followed by coffee and a chat at a café. Due to the 100k area covered, it would be best to vary meeting places. I set up an email address and printed brief information handouts on the Camino, information on the date and place of our first meeting, and contact details and the aims of the group.
I decided to call it the ‘Central Coast Camino Group’.

After the fiIm and my talk, I dashed out to the foyer to find people already waiting to talk and wanting information. All 50 flyers were gone with many people wanting to know if I was on Facebook. There was also a list of 20 email addresses.

I realised I would have to set up a Facebook page so emailed those interested, welcoming them and telling them about the first meeting to be just 9 days later. Word had spread and by 9am on that day, 21 people had arrived, including 3 from Sydney to show support. A great success!

Setting up Facebook was an urgent task and I needed the advice of Julie from ‘Pilgrims in Sydney’ who was very helpful and still advises me when I get stuck. At first, the group was ‘open’ but I quickly made it a ‘closed’ group. This meant that those wishing to become members have to apply and answer 3 questions:

I use my discretion and we have a few ‘extra’ members whom I personally know and can contribute knowledge. What still amazes me is that there are some people want to join who have no interest in the Camino whatsoever, or even walking! I have only blocked one person who wanted to dominate the posts with daily ramblings about herself. We now have around 160 members, of whom about 50 are active. The group does not actively look for more members, but we do have several who have enquired via AFotC; otherwise membership grows by word of mouth. We have 23 members walking the Camino this year and 2 hospitaleros.

A recent photo of the Group

The group is still evolving and now the meetings are called ‘walks’ after which we generally have a picnic. A annual calendar of walks is produced (which is subject to change). After each walk, messages are sent with brief details of the next walk, and a reminder with full details is sent 1 week before each walk. We had a 2-hour information session last April for those who were walking a Camino for the first time, and our December meeting is a (BYO everything) lunch at a member’s house.

Because of health issues, I can no longer take part in the walks so have had to find people willing to act as leaders. It does concern me occasionally that there will inevitably come a time when I can no longer run the group.

So what is the future of the group? I want to have 2 information sessions before next year, and if the group gets much bigger we may have 2 walks each month (short and long). I hope that these notes will help anyone thinking of starting a group, and I am happy to be contacted for assistance.