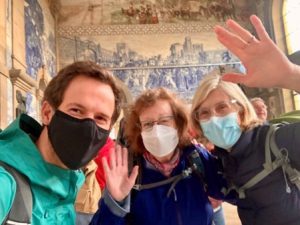 In December of that depressing Covid year, 2021, my friend Robyn and I cheered ourselves up by booking cheap flights, initially to Madrid towards the end of April 2022. The Australian government had only just lifted restrictions, and both of us had pressing responsibilities at home, but after two difficult years we needed the carefree pleasure of another Camino. The tickets were flexible and I don’t think either of us really thought we would be on that plane.

So it was with some surprise, and joy, that on 14 April this year, we landed at Lisbon airport. We planned to take the train to Porto, walk to Santiago de Compostela, then bus to Oviedo where we would meet another friend, Annette, and walk the Primitivo together. We had flown out of Sydney through Dubai. The plane was completely full, something that concerned us on our first tentative step outside our home Covid zone. We took comfort in knowing the airline demanded clear PCR tests and vaccination certificates from every passenger. In the airport all were wearing masks, but in the plane most people seemed to think it was good enough if they covered their chin. I eschewed eating for the first half of the trip, keeping my mask firmly in place. We hoped that transit would overcome the Portuguese prohibition on Australians flying directly into Portugal–in force for Covid reasons. It was a bit of mystery, as infection numbers were comparable, and fully vaccinated Australians were allowed into the rest of Europe.

Despite the official prohibition, our arrival in Lisbon was exactly as normal. No-one asked for any documents other than our passports, and it was the same for the two months I was in Europe, in Portugal, Spain, Germany, Australia, Slovenia, Italy and Austria. When we arrived in Lisbon, it was Maundy Thursday, the day before Good Friday. I’d not booked the train to Porto, because they leave every hour… forgetting that every person in Portugal returns to their family for Good Friday. The helpful ticket seller eventually found us two seats (grand total $13 each) on the ‘slow’ train –the one that takes 12 minutes more than the fast one. We thought it a good deal. Like the plane, the train was completely full. The difference was that the Portuguese really were taking masks seriously and were well covered. It was reassuring.

Santo Ildefonso opposite our hotel in Porto

I had read reports that accommodation options were limited. Businesses were unable to hang on during Covid, especially those dependent on tourists. Now that pilgrims were back on the trail there could be a squeeze. Our plan was to use a mix of accommodation including albergues, provided they were not crowded. I’d seen pictures of dorm rooms with bunks spaced apart, and only allowing occupancy alternatively up or down. Those pictures were comforting.

In truth, by the time we were there, most of the Covid precautions had been abandoned. In Porto we stayed at the Moove Central Hotel, a comfortable medium-priced hotel, in a converted cinema building opposite the iconic Church of Santo Ildefonso. The hotel was very careful to comply with Covid protocols. On Good Friday, after visiting several churches, none of which seemed to be having services, we had coffee and cakes at the beautiful Café Majestic, then wandered the city, visited the stalls along the waterfront, and climbed up for a walk over the Dom Luis bridge and lunch at Vila Nova de Gaia. As Robyn and I have both visited Porto before, we skipped the usual sights, but for anyone visiting for the first time, I highly recommend the Palacio da Bolsa –a building that looks nothing from the outside but is truly amazing inside.

On the Sunday, we set off from the Cathedral, on our Camino in earnest. It started perfectly; a lovely walk out of Porto following the Duomo to its mouth, then along the Atlantic walking on the Senda Literal (Coastal) path. We eased in with slow walking, much stopping for photos and coffee stops. On that first day, after about 14km, we decided to look for accommodation. Robyn had said that 14km was as much as she could ever walk (within a few days she was averaging over 20km), and her pack was heavy. Our first walk-up accommodation was full, but the helpful owner telephoned her rival and found us a comfortable room in a tiny but very cute attic. 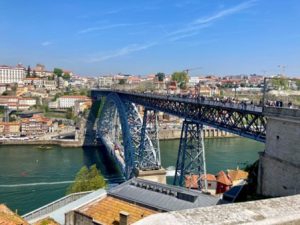 This set the usual pattern for us. We would walk as far as we felt comfortable, then use our smart phone guide and apps to find something close by. Sometimes our desired accommodation was not available, but if we were flexible there was always an acceptable alternative. Being able to share a room with a companion certainly helps with the cost, giving us choices when we did not like the look of an albergue.

Eventually Robyn and I will get over the trauma of sharing a ‘matrimonial’ bed! On days when Robyn wanted her pack carried, we would book ahead the night before, because the luggage carrier needed a destination.

Over the next 14 days we had a wonderful time, initially walking along the Literal to Vila do Conde, then, tired of the continuous blustery wind off the sea, turning east to San Pedro de Rates and joining the Central route. As I write I’m looking at my blog and reliving the pleasures. I think some of the titles of the daily entries give the flavour of the walk – “Gifts of the Road” (mandarins on a hot day), “The Road Less Travelled” (we got lost), “Gilded Wood and Blue Tiles” (beautiful church), “Rural Bliss” (a soft path instead of stone sets), “Pink Granite” (a stone cutting factory),“Green Galicia” (deep green lane in the rain), and finally – “Santiago is Wonderful” (Mass, botafumeiro, Credential, celebrations).

After two very full days in Santiago we took the plague bus across to Oviedo – full of sniffling, sneezing, coughing passengers, taking off their masks to do so! In Oviedo we were joined by Annette, whom I had met on the Via de la Plata, and who had joined me on my previous Portuguese Camino. For those of you who have walked the Primitivo, you will know that Oviedo is fabulous, full of interest, has the glorious Hotel de La Reconquista, and the Primitivo is possibly the most beautiful of the well-known routes in Spain. This was my second time and far more enjoyable than the first, because this time I was trail fit – the Primitivo is strenuous. 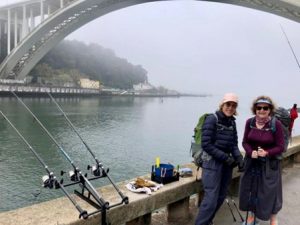 The Primitivo is well served with albergues, and we often stayed in them, albeit sometimes in private rooms. It was after 14 days on the Primitivo that I came down with Covid19. I’m pretty sure I caught it from a fellow pilgrim sitting next to me at a group dinner. He was obviously unwell. Two days later, after a mountain walk on the Hospitales route, I woke up feeling the beginnings of a cold. I used the RAT I had carried from Australia. Positive. I shooed Robyn and Annette out the door. We decided they should continue walking, hoping that neither would succumb—amazingly neither did. I never want to be the agent of ruining someone’s Camino, knowing how much people dream and plan and save for them.

With the help of the hospitalera I was transported to a small self-contained flat in the next village, where I isolated for 7 days. My symptoms were minor and resolved quickly. I read a lot of books on my smartphone and went for solitary walks on the edge of town.

By the end of the 7 days Robyn and Annette were nearly in Santiago, so I caught a bus to Lugo, and from there to Santiago. It was good to cheer Robyn and Annette as they walked together into the Praza do Obradeiro. Two very special people who had not known each other before, but who will now be friends for life. I always knew they would get along!

Some thoughts about this experience? In the life of the Camino this current Covid19 pandemic may be but a flash in time. Or not. Sickness has often stalked the Camino, but the Camino has survived. The essence is still there. 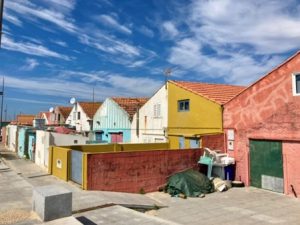 Cottages of the fisherfolk 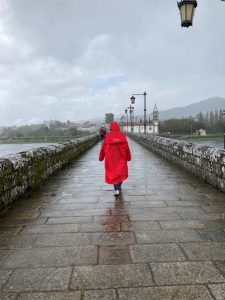 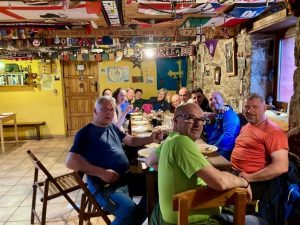 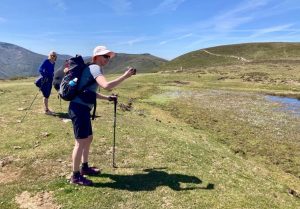 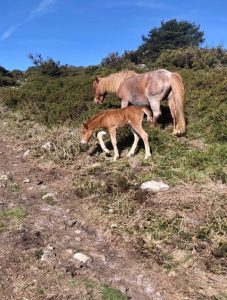 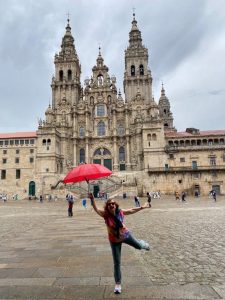 Jill at San ago de Compostela
Australian Friends of the Camino