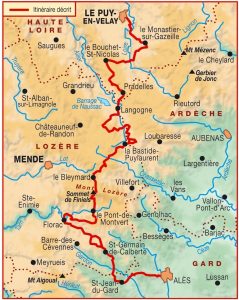 This question played on our minds when we were hiking the Chemin de Stevenson in the mountains of southern France in 2018. The route follows the path that a young Scottish writer, Robert Louis Stevenson, took in 1878 when he was depressed following a love affair with a married woman. With a donkey called Modestine, he hiked through the Velay, Gévaudan and Cévennes mountains trying to make sense of his emotions and heal his broken heart.

On returning to Scotland he wrote Travels with a Donkey in the Cévennes, a book that is still in print, and is considered a classic travelogue, the first to present hiking as a recreational activity.

His trek has now been designated as the GR70 running north to south along the Massif Central for around 350 km from Le Puy-en-Velay to St Jean du Gard, with an option to continue to Alès.

Way-marked with the standard red and white GR signage the shaly route follows old bridleways, ancient stock routes and mountain tracks through the rolling farm- land, granite hills, chestnut forests, limestone ravines and hilltop fortresses of rural France. There are long sections where the forest closes in, so hours of walking pass by with only fleeting mountain views through the dense trees. The quaint stone villages are few and far between, and seem to hunker down into the contours of the landscape.

A keen eye can still find glimpses of the region’s fascinating history, from pre-historic burial sites to ruined villages associated with the brutal eighteenth- century Protestant Camisards who sought refuge in the area and fought to resist religious persecution. 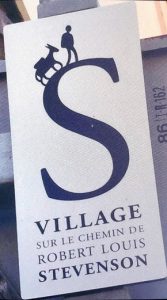 Signage in designated villages along the GR70 . Editor’s note: The comedy hit movie of the 2021 French Film Festival ‘Antoinette in the Cevennes’ features much of the Stevenson Trail.

For those seeking a challenge or wishing to emulate Steven- son’s trip, donkeys can be hired, and there is dedicated accommodation along the way where donkeys can be fed and stabled, although some walkers choose to free camp. Travel-ling with a donkey is not always easy, and would-be hirers must undertake a one-day training program before setting out. We  encountered  three  groups  walking  with donkeys, and each with entertaining and sometimes frustrating stories to share!

The highest point of the trail is the 1700m Pic Finiels, part of the Mont Lozère ski resort, and the gateway to the Cévennes National Park. The

path here is a draille, an ancient stock route marked out by a series of vertical granite slabs called montjoies. Some of these are carved with the Maltese Cross to indicate the limits of landownership by the Knights of Saint John of Jerusalem.

As we walked through this beautiful, rugged sparsely populated landscape we pondered the differences between this walk and other Caminos that we’ve done, and tried to identify why we found this walk less of a pilgrimage and more like a multi-day hike – what was missing?

Was it the SPIRITUAL ASPECT of the journey?

When walking on a Camino route you constantly encounter reminders of the spiritual and religious focus such as crosses, religious statues, monasteries, convents and churches that are open and welcoming to pilgrims. On our first Camino, as non-practising Christians we didn’t expect to be as moved as we were by the spiritual aspects of the walk, and were surprised by the lasting impact it left on us. Although the GR70 is steeped in religious history, it is predominantly linked to the Protestant faith. While there were lots of crosses and churches along the route, all the churches were locked up and many seemed disused. Other walkers didn’t seem to have the spiritual focus that is more common on a Camino. 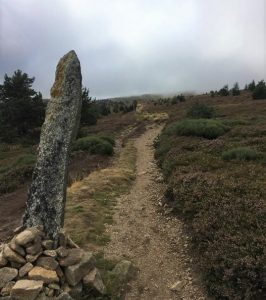 A ‘montjoie’ in the Cévennes National Park 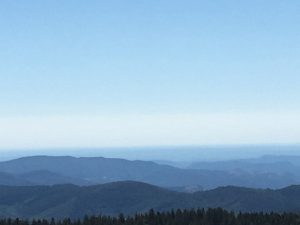 The ‘blue waves’ of the Cévennes mountains from Mont Lozère 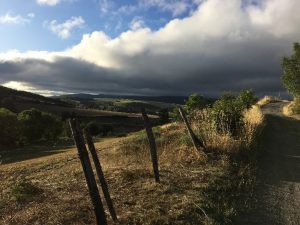 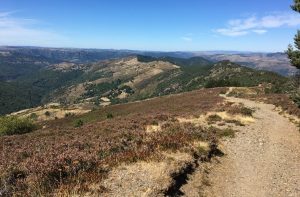 Track along the ridge top

Was it the significance of the JOURNEY & THE DESTINATION?

People may undertake a pilgrimage because of the importance of a specific destination, or may be on an emotional journey of discovery, or growth or healing – regardless, their motivation is generally a key aspect of how they view their journey and the arrival at their destination.

When arriving in Santiago de Compostela there is a real sense of arrival, of completion, and of celebration.

This is often coupled with a sense of loss that the journey is over, followed by a yearning to return and do it all again in the future. By contrast, arriving in St Jean du Gard seemed like a real anti-climax – the trip was over, and our fellow hikers were busy catching trains and buses back home. There was no waiting around in a central square to welcome other incoming walkers, no tearful reunions, no rituals such as the pilgrim mass, or lining up to get a Compostela, or to share one last beer with your Camino family!

Was it the CAMARADERIE?

The communal aspect of albergues is one of the great Camino experiences and it really contributes to building a ‘family’ to share the highs and lows of the journey with – all the stories, laughter, food, blisters, tears, and joy. Despite often lacking a common language our shared goal of enjoying every day as a gift, and a determination to make it to Santiago de Compostela seemed to bond us together.

On the GR70 this was missing – the gite accommodation was generally smaller, with fewer communal rooms and while most meals were shared, we found it harder to bond with other walkers. Our limited grasp of French probably exacerbated this, although everyone was very friendly and welcoming. Also many of the hikers were only doing short sections of the route as a weekend walk or short break, so it seemed they were there one day and then gone, limiting the time we shared.

Was it the HISTORY of the journey or the destination?

The various Camino routes have been attracting pilgrims for centuries, and the ley lines along the trail from past pilgrims resonate very strongly for some walkers. Other important pilgrimage routes such as to Lourdes or to Mecca are also steeped in religious significance and tradition. So it’s a bit unfair to compare a relatively new walk like the GR70 with other major pilgrimage routes for the sense of history that it imparts to those who walk it.

Was it the EXPERIENCE of simplifying life to basic needs?

On all our long-distance walks we aim to pack very lightly and simplify our possessions as much as possible. It’s very liberating to carry everything you need weeks on your back, when daily decisions are limited to walking, eating, sleeping and enjoying the company of others. This sense of ‘getting back to basics’ is something we strive to maintain in our everyday lives, although not always successfully!

So – YES, there are differences between a pilgrimage and a long walk, and we would describe the GR70 as a beautiful long-distance walk. But all walks are different, and maybe a walk can be a bit of both – a long walk may become a pilgrimage, while a pilgrimage doesn’t necessarily have to be a long walk. We plan to keep on walking and keep on pondering the question…