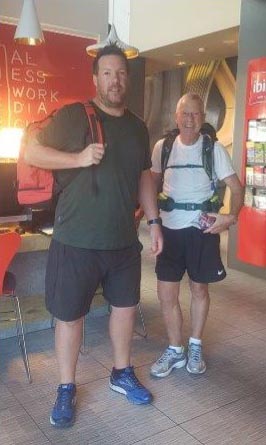 I was looking at a photograph of something akin to swiss cheese. “It’s arthritis,” said my orthopaedic surgeon, “We took the photo while doing your arthroscopy”. Until then, I had no idea what a knee joint should look like but it was obvious, even to me, that this was not a roadworthy one. The upshot was that, in December 2008, I had a TKR, a total knee replacement.

Until then, I had been active and reasonably fit. Years earlier, I regularly competed in an annual 65km trek and a 40km charity walk and, following my knee operation I determined to make the best recovery possible, walking regularly until I was able to comfortably cover the 12km from my home in Hallett Cove, South Australian, along the beach to Glenelg.

I’m also a cinema enthusiast, usually weekly and often at the Glenelg cinema. In 2010, I was inspired by ‘The Way’, which portrayed the experiences of a man who spontaneously decides to walk the Camino. The physical challenge of walking such a distance, largely unaided, appealed to me. However, it was to be another 8 years before I finally took my first step into the unknown.

I walked with my son Andrew and our preparation commenced as you might expect, by asking questions. We consulted ‘Professor Google’, joined the Adelaide branch of Friends of the Camino (AFotC) and, having opted for the Camino Portugués, bought John Brierley’s excellent guidebook. We met with a number of experienced pilgrims whose advice was really helpful but, in hindsight, our data gathering suffered from not actually knowing which questions to ask!

For 6 months we prepared physically, regularly taking long walks including the strenuous path to Adelaide’s Mount Lofty and 20-30km walks along the southern beaches and the Torrens Linear Path to Adelaide. We studied Brierley’s route plans and listed what we’d need to take with us. As the idea of having our baggage taxied ahead each day seemed like a bit of a cheat, we decided to carry everything we needed and that meant travelling light. From some indeterminate source, we heard that our pack weight should not exceed 10% of body weight which, in my case, meant about 7kg. We assembled our travel items and it dawned on us how little we could take, especially given the medication that I considered to be essential… I subsequently discovered that Portugal and Spain both have excellent pharmacies.

My ‘luggage’, such as it was, finally comprised 2 pairs of lightweight shorts, 3 quick-dry T-shirts, 1 light sweater, 5 pairs of socks and jocks, wet weather clothing, washing gear, a reduced but still extensive range of medication, an anti-bedbug blanket and our rucksack. I travelled and walked in Brooks Maximus cross trainers, which I’m still using. My backpack, excluding daily food & water, came in at about 6.5kg. We were ready to go! 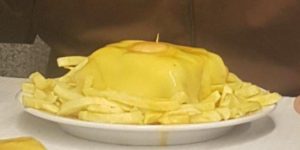 We landed in Lisbon last 25 April and achieved 3 key goals on our first day—our first credencial stamp, our first Portuguese beer—Sagres (pronounced ‘Sagresh’) and, for supper we risked a Francesinha (otherwise known as ‘a heart-attack on a plate’). That set us up nicely for Day One of our Camino.

We set off on a cool, beautiful morning at about 7am, which became our normal routine —start early, finish early, to bed early. We had allowed a total of 21 days to cover the 630km route but with the rest of the family arriving at Santiago on 17 May, our deadline was fixed. Along our journey we learned… 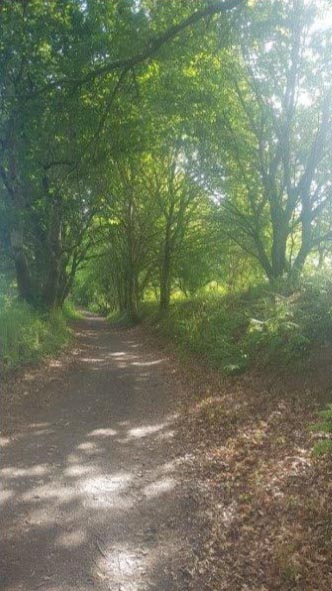 The trail into Santiago

Starting in late April proved a good decision – plenty of accommodation and relatively cool conditions, especially with the early starts. Walking into Santiago was amazing as our route delivered us close to the town centre via a quiet, leafy lane rather than the busy roads that we had anticipated. We were up early next morning, arriving at the passport office by 7.20 but the queue was already some 40 people long so we never got to experience a free meal at the Parador.

I recommend the Camino to everyone who asks, for the opportunity to experience the real Portugal and Spain at a walking pace and (for me), the chance to spend 20 days sharing the journey with my son, Andrew.

Completing the journey gave me a great sense of physical achievement and personal satisfaction; I felt that I could tick a Camino off my bucket list.

Just three weeks later, Andrew and I were discussing the next one! We’re hoping to cycle the 830km Camino del Norte from San Sebastian to Santiago in 2021.