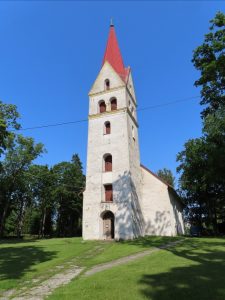 We were hiking the Baltic Coastal Trail when we connected with an Estonian lady, Merle, in Latvia, who was hiking a part of the same trail. Chats turn to where you’ve hiked and we are all pilgrims of Santiago. On meeting her in Estonia, she tells us of a group of Estonian pilgrims who meet on this upcoming weekend every year for the last 12 years. It took no arm twisting to get us to say yes and deviate from our trail.

We meet on the Friday night at the PärnuJaggupi (St James) church for a blessing and the most amazing, moving concert. Predominantly vibraphones with a mix of percussion including bongo and snare drums with some vocals. Sounds from heaven. A shared pilgrim meal follows in a building next door and we sleep above upstairs. Laying on my bed that night in a dormitory room, I could have jumped on the next plane to Spain and started walking. Such was the impact of the evening. My understanding is that this building was donated to the church and it’s wonderful to see it put to use as a house for pilgrims. We were gifted beautifully hand-made crocheted crosses to attach to our packs. The church of Pärnu-Jaggupi was built in 1531-1534AD and has survived the turmoil over the years of this region. This church is open all the time during the summer months.

Saturday morning sees a shared pilgrim breakfast and our packs are loaded into our support vehicle which continues to meet us throughout the day. Twenty of us and Ariel (the dog) are soon on our way, and these last minute Aussies are welcomed and immediately feel a part of the group, not the random strangers that gate crashed their pilgrimage this year at the last minute.

The route we walk is not part of the Camino Estonia. This particular route has been in place since the first walk when the Estonian pilgrims first met to walk together and is an annual tradition. The Camino Estonia was created much later. As a predominantly Lutheran base, they found it incredibly difficult to get the churches to open for pilgrims. That was until the Archbishop, a Santiago pilgrim himself, walked with them. Suddenly, the church doors opened. One of our group is also a parish priest. 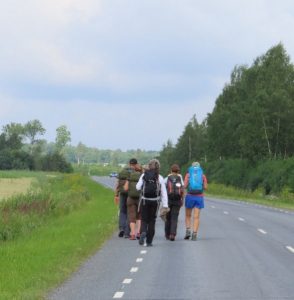 Pilgrims on the road

The walk today is 28kms and is mostly on roads, with Joe, our awesome support vehicle person meeting us at appropriate spots with food and water. The Estonians sing a lot and we were treated to sing-a-longs we couldn’t participate in due to the language barrier, but good fun all the same. We knew the tunes and could hum along and they sang in rounds and it was so entertaining. Such happy and strong people.

As pilgrims do, at times we were a large group, at times two people talking together and sometimes alone. We learned so much about the lives of the Estonians. Their love and passion of Estonia, their strong spirit to be independent, their lives under previous Russian domination and their lives in the present.

Lunch was at a farm where the local farmer made us delicious soup with home made bread and a bowl of freshly picked red currants from the farm. We were able to buy a beer and he gave us a tour of the farm which had been in the family for more than 100 years. What an enriching experience!

We arrived at our destination of Mikhil church for the evening. This stunning church was built in 13th century and has survived all that history has thrown at it. Merle met the group with a box of cherries to share.

Our digs are in an old church building. Everyone bogs in and moves things to get a dining table together big enough for all of us and drag the mattresses out so everyone can get sorted for bedtime. We share a meal that has been brought in for all and we share our day together. With the language barrier (many do speak English), someone interpreted for everyone. We felt such a part of this group.

Sunday morning we awoke to rain and donned all the wet gear for it to turn to sunshine shortly after and remain shining for the rest of the day. This days hike was predominantly through the forest. With the rain, it wasn’t long before we all had very wet feet, but the singing and merriment continued. Finishing at lunchtime, the hike was about 12kms. 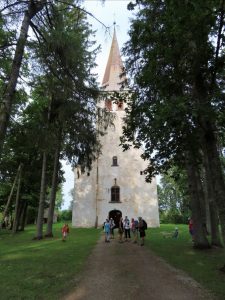 Emerging out of the forest onto farmland where cows have recently been, the group leads us to an ancient village, where there are only ruins and an old natural well where they filled their bottles. The story of the village is that they helped prisoners of war and when the Russians invaded, most were sent to Siberia. Such a sad tale. The last living person in the village passed away 1963.

We finish before our ride back appears so we head to another ancient place. This ‘town’ dates back to 10th-13th century and is built on a dome surrounded by swamp. The area was known as a strong fortification and was first invaded by the Germans in 1210 and finally conquered it in 1215/16. My understanding is that the initial people were thought to be Vikings or from a similar culture and the intent was to Christianise the people. Upon surrender they were all baptised. The first excavations were done in 1895, but further excavations in the 1960’s revealed a treasure trove of all sorts of relics for archeologists.

We finish with a service back at the Jaggupi church followed by a shared meal prepared by the local parishioners.

Needing to get back on our trail, we said tearful goodbyes, exchanged contacts with each other and felt so full with the Camino experience of the weekend.

Call it coincidence or good timing, but I firmly believe the Camino spirit had us meet with Merle. There were exactly two spots left the day before they left, they were being kept for us by the spirit. We are family in less than 48 hrs together. They sang us a song as we left of farewell and reduced us to tears. You guys know it. The Camino ‘effect’. There is no language for this feeling.

So this is what happens when you let The Spirit do it’s thing.

Information on the Camino Estonia can be found on their website caminoestonia.com

[This article was written on the fly during Lari and Hedley’s Baltic hike. I asked Lari to tell us a bit more about the Baltic hike which led to their Estonian Camino sideline. ED.]

The Baltic Coastal Hiking Trail, part of the E9, runs from Lithuania to Tallin in Estonia in the Baltic states. The whole distance is around 1500kms, but you can choose where to start and finish or what sections you would like to do. As the name suggests it is a coastal hike for the most part, but there is often a forest trail that runs parallel to the beach and we took this often if we got fed up or it got too hot on the beach. It’s beautiful countryside with fabulous people all the way. Options for full pack and camping or staying in guesthouses or hotels is also available. There’s a plethora of information online including maps and trail notes all in a free pdf format.

I highly recommend this less well known trail, as there is sufficient infrastructure, it’s inexpensive, public transport is cheap, the people are wonderful and helpful and most people speak English.

But, we weren’t finished with this journey yet. We met a beautiful couple from San Francisco in 2014 on the Camino Francés who became firm Camino family—we have met many times somewhere in the world since. They have changed from hiking to biking and we met in Vilnius, Lithuania for a cycle tour back to Tallin. baltictrails.eu/en/coastal 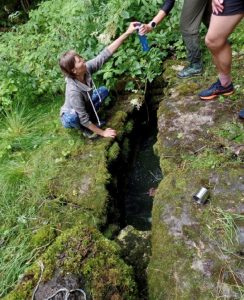 Getting water from the old well 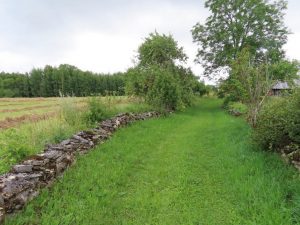 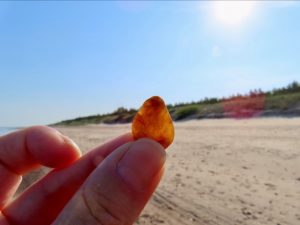 You can find amber on the beaches! 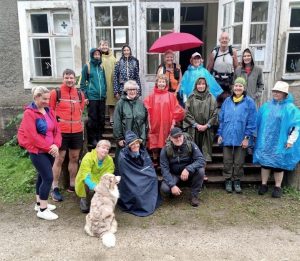 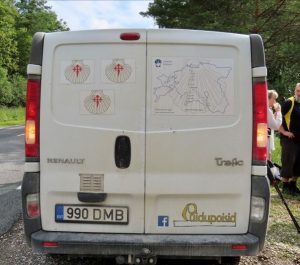 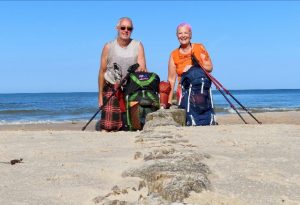 Lari and Hedley on the Baltic trail 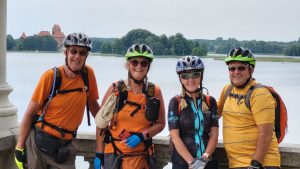