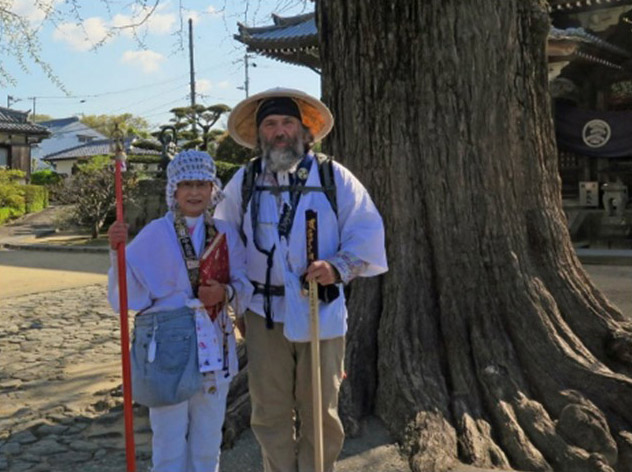 Stephen and Inoue Misuzu exchanged osamefude (paper nameslips). Inoue’s was red, as she had completed the pilgrimage more than 8 times.

My partner Ursula and I have been interested in walking the Spanish Camino for more than 10 years, Ursula has a strong interest in Spanish-speaking cultures and we had spent time in Central and South America as well as Spain itself. We both were at the first meeting of AFotC in 2010. In 2009 we went to Spain taking Ursula‘s mother and visited parts of the Camino by car. The idea of walking such a long distance seemed thoughtlessly possible at the time but as we got older, and perhaps a little wiser, the idea of long-distance walking had made us think again about the Camino. The desire never really went away.

In 2018 I retired and attended Janet Leitch’s talks about the mechanics of walking the Camino, as well as another by Tony Gibb who had ridden a bicycle around Shikoku, where I learnt about the Shikoku pilgrimage of 88 Temples. I came to the conclusion that the Shikoku pilgrimage would be a good testing ground, Japan being much closer than Spain (and a cheaper flight). I was prepared to experiment, understanding that at worst my walk might turn into a total disaster but  could be translated to a few weeks holiday in Japan. Consequently, in April 2019, I found myself getting off a flight from Adelaide in Tokyo. After a few days sightseeing there I caught an overnight bus to Osaka and from there a bus to the main railway station in Tokushima. Shikoku is the smallest, and least developed of the four main islands of Japan. It is divided into the equivalent of four states called prefectures and each prefecture has its own capital city. Shikoku is very rugged in its interior and mostly wilderness. Contrasting, it is significantly developed around most of its coastline, except for parts of the south, which are sparsely populated. While there are biggish towns on the west and north coasts, the four capitals are the major urban areas on the island.

The pilgrimage follows a generally clockwise path around the perimeter of the island. The nature of the narrow populated edge of the island means that roads which 1000 years ago were the tracks between small communities became the basis of most roads and highways today. Consequently the pilgrimage path is much more paved than I understand is found in Spain. In fact, of all the Europeans I met, I don’t recall any who hadn’t walked the Camino first. It is very common for temples to be placed on the tops of hills or mountains for religious and other reasons, so some of the natural trails are also quite steep and can be difficult. 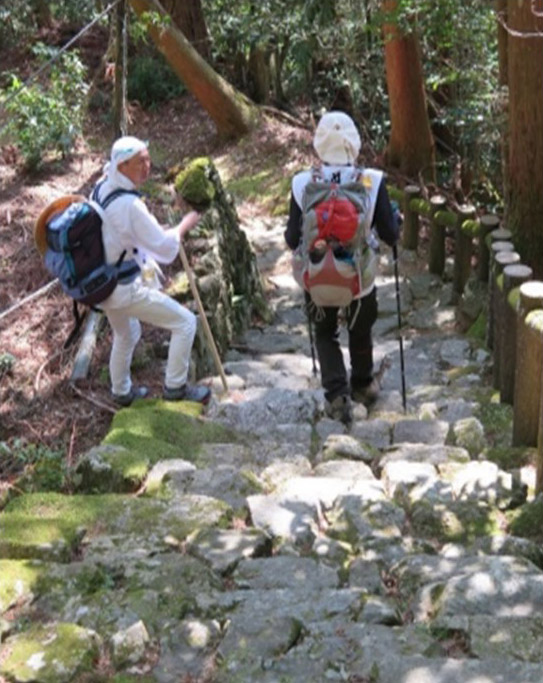 The Japanese have a word for these difficult places: korogashi. It literally means where the pilgrim falls down and, like many ideas of this pilgrimage it can have a double meaning. The obvious physical one of a pilgrim tumbling down the steep mountain side but also the less obvious failure of will and the pilgrim turning back, not completing the task they set themselves.

The 88 temples of this pilgrimage are not the only temples on the island, but they do have a special cachet. Their significance being that all the sites are associated either truthfully or apocryphally with the Buddhist monk Kukai, from around 800AD. Later he was known as Kobo Daishi.

Kobo Daishi’s claim to fame was that, at a time when Buddhism was poorly developed in Japan, he travelled to China and collected scriptures which he brought to Japan. Buddhism was more firmly established in Japan by his actions which established it as one of the two major religions still found in Japan today, the other one being Shinto.

My understanding is that the Shikoku pilgrimage is unique in one respect. It is not a path to a particular place, rather it is a path that follows a circle. Consequently there is no actual start or finish. Typically, people start at the first numbered Temple and go to the 88th, but this is not a requirement, it is more a historical quirk as Tokushima, the location of Temple 1, was often a landing spot for pilgrims coming from the main island of Honshu. It is quite acceptable to begin or end anywhere along the path and the method of transport or even direction are not set as hard and fast requirements. Having said that, walking is seen to be a sign of a greater dedication and travelling the pilgrimage in a counter-clockwise direction is also seen as accruing more merit. But it is usually stressed there is no right or wrong or better or worse way.

That first day, my personal goals as I left the main Tokushima railway station on the small, local train were multiple. Could I even walk any distance at all? I had never attempted a long distance walk before in my life. I had in the previous several months been walking unencumbered 5-10km every few days. I knew I was okay with short distances, I didn’t know what a full day of walking with a backpack might entail. Especially on the mountains. Would I be able to cope finding basic necessities such as food and accommodation in an area where I did not speak the language, as well as, dealing with any unforeseen issues that may come up? And finally, was this style of walking going to prove more expensive than I could reasonably afford on my pension? I had really set off into the unknown, far outside my comfort zone. I knew I would be chiefly relying on my ability to adapt and the assistance of strangers.

Alighting from the train at the small countryside station of Bando only 12kms from the centre of Tokushima I wondered how I would find my way to Temple 1. I had the Shikoku 88 Guidebook which is the essential item for all English speakers. But Japan is a much more organised place than I imagined even in the countryside. There was a green line about 15cm wide painted along the road leading from the railway station to Temple 1. I was able to follow it with ease and minutes later I was in the courtyard of the temple admiring the architecture and gardens.

Most Japanese Buddhist temples have a similar architectural layout, just as most Christian Churches tend to follow a pattern. There is a main hall which houses the statue for the Buddhist deity who is relevant to that particular temple. There is another lesser Hall in these Shikoku temples which is dedicated to Kobo Daishi. There are also other standard features; a large censer outside each hall, cabinets for candles, offertory boxes, an ablution basin, the main gate, a large temple bell and last but not least the temple office. 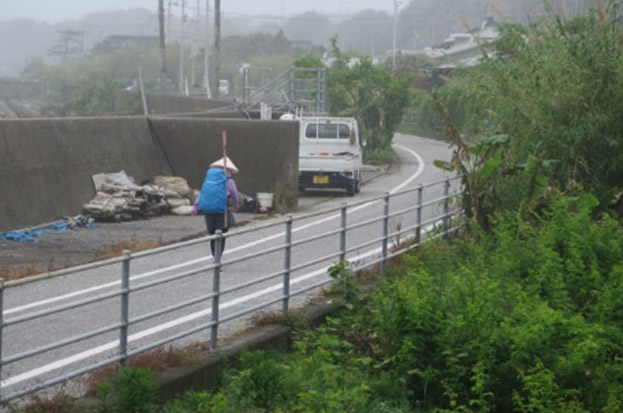 After wandering around Temple 1 for a short time, I went to the shop next door to buy pilgrim paraphernalia. They kitted me out with the things that every well-dressed pilgrim carried, including a white jacket, stole and a walking staff. Like most things about the pilgrimage, these items can carry a symbolic as well as a practical use. The walking staff is representative of the spirit of Kobo Daishi and is symbolic of two people striving together as one. The white jacket, which visibly identifies the pilgrim from a distance is culturally the colour of mourning. It previously represented the pilgrim’s readiness to accept their own fate. This was more than an idle gesture, as in the past, when times were much tougher, pilgrims could, and did, die on the trail. When found, being already dressed in their white funeral shroud, they could be buried immediately and their staff used as a temporary grave marker until word was able to be sent back to their family who may, if well off enough, have been able to provide for a more permanent memorial. It was common to walk along the trail and see the gravestones of previous pilgrims.

After leaving the shop properly kitted out, I returned to Temple 1 to carry out the required ceremony which involves paying respects at each Main Hall and Daishi Hall. After carrying out these two obligations, it is possible to get a book stamped and initialled with calligraphy in the Temple office. Very much the equivalent of the Camino credential.

Because I had travelled from Tokyo overnight and from Osaka that morning, I left on my first day of actual walking in the early afternoon. It was possible to follow the map in the guidebook—mostly—easily which was supplemented by markers along the path. Of course, that afternoon I got lost. Which became a daily occurrence for the next week or so and sporadically even after that. Even so, I was able to reach the fourth temple just prior to its office closing time. I was able to walk to the fifth temple in the late afternoon. My accommodation, which I had booked over the Internet, was next door. That made it a convenient spot to begin early the next day. I found the accommodation easily as it had identifying banners hanging outside in the Japanese manner. And thus began my education about walking generally and Japan specifically. I remember unloading my backpack in a bunk room which I had to myself and thinking that my feet were sore, though not as bad as I had feared, and wondering what had I really got myself into…

(Spoiler; I met a lot of interesting people, I had a lot of time to contemplate things, I found out about various different types of accommodation and food in Japan. I saw many interesting practices, sights, places and creatures. I learnt about blisters, chafing, being rained on and sweaty, mountains, and having sore feet.

But I also found out after 350ish km, it was eminently do-able, so I did another 450km. The dreaded Covid hindered my complete circumambulation but I will go back to finish as soon as I can). 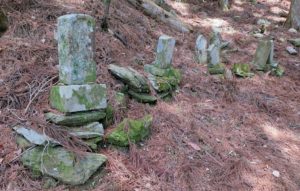 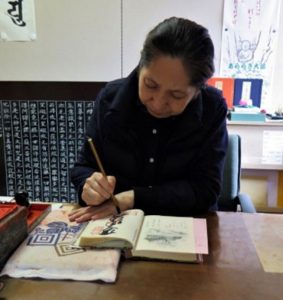 Calligraphy being written into my Nokyocho (stamp book). Each visited temple provides a set of 3 stamps and calligraphy, unique to that temple. 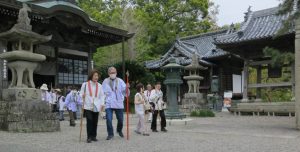 Ohenro (pilgrims) visiting Temple 10. The building on the left is the Hondo (main hall), on the right is the Shoro (bell tower) which all henro ring once on their arrival. 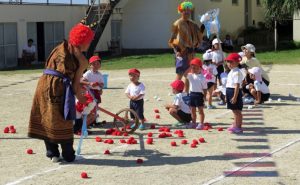 A primary school sports day, where the kids were playing a basketball-like game. 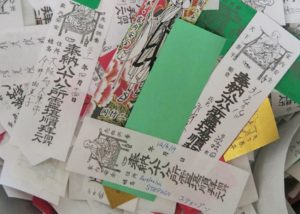 Osamefude left by henro at each temple. The colours denote how many times the pilgrim has completed the pilgrimage. White (like mine) shows the pilgrim is on their earliest attempts. The gold one, just visible, indicates more than 50.
Australian Friends of the Camino