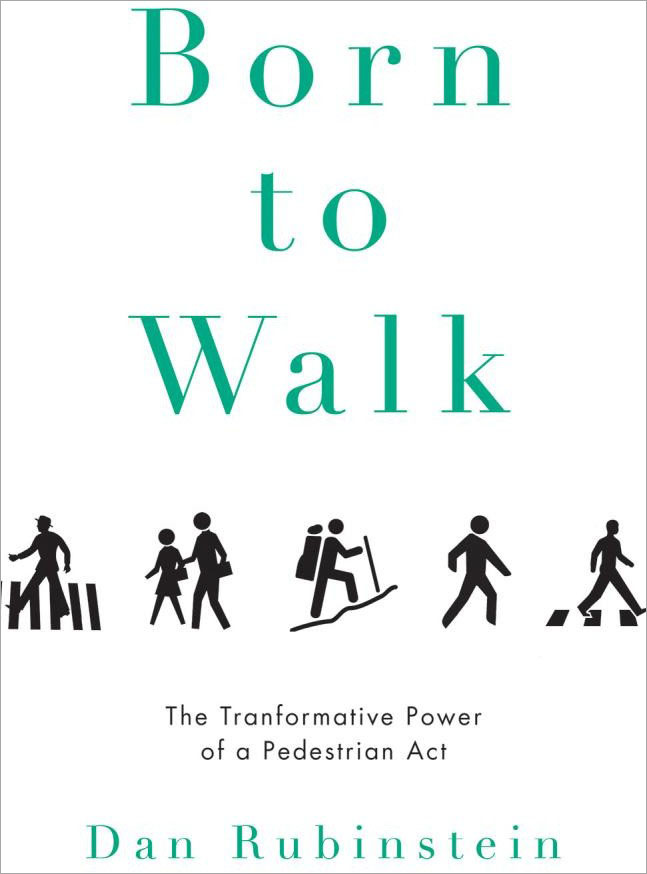 The humble act of putting one foot in front of the other transcends age, geography, culture and class and it’s one of the most economical and environmentally responsible modes of transit. Yet with our modern fixation on speed, this healthy pedestrian activity has been largely left behind… There are no magic-bullet solutions to modern epidemics such as obesity, anxiety, alienation and climate change. But what if there is a simple way to take a step in the right direction?

The dust jacket blurb on Dan Rubinstein’s book intrigued me, both as a Camino tragic and having recently had an operation on my legs for which the rehabilitation was ‘walk, walk and walk some more’.

Rubinstein took extended walks all over the world, examining how walking whether for work, leisure, therapy or health is a win-win solution to so many of the world’s seemingly intractable problems. His chapters are headed Body, Mind, Society, Economy, Politics, Creativity, Spirit and Family and each one demonstrates how huge improvements can be made to that particular aspect of human existence by the simple expedient of putting one foot in front of the other. But of course, the gains are always more wide-reaching than the particular area being studied.

In the chapter entitled ‘Mind’ we learn about Glasgow’s Paths for All program, a program of open walks which anybody can join, and other closed walks for hospital in-patients, people with learning disabilities, members of ethnic minorities and referrals from GPs. In one year £50,000 was spent on salaries and volunteer training but for every £1 invested, £8 was returned to society by making people more physically and mentally fit and reducing home care needs, medical visits and
prescriptions.

As early as the 1960s, calls began for ‘more boots on the street’ – a return to more police foot patrols. Officers on foot have a lot more opportunity to interact with all the ‘normal’ law-abiding people in the neighbourhood, rather than just the criminal element. This proved very successful in some of the most crime-ridden cities of the US such as Philadelphia; however the simple addition of more people on the streets through an emphasis on cleaner streets, slower traffic and greater walkability has also been proven to reduce crime. The community polices itself through a greater public presence.

Traffic congestion is another subject we hear a lot about. Reversing the trend of urban sprawl, the city of Portland adopted a ‘skinny streets’ philosophy to help reduce speeding, vehicle crashes, street construction costs, pedestrian crossing distances, impervious surfaces (and therefore storm-water drain capacity), street maintenance and re-surfacing costs and heat re-radiation which contributes to the urban heat island effect. All this has helped the city reap multiple benefits from increased numbers of pedestrians.

In the epilogue, Rubinstein mentions his experience of fire-walking. Standing at the edge of the fire-pit with African drumming filling the air, the group is told to extend their arms forward, palms up, and repeat the mantra “cool moss”. Six footfalls later, he was on the other side with no pain at all – just the sense that once started, it was easier to keep moving than to stop.

Dan Rubinstein is a national magazine award-winning writer and editor.  He does most of his walking in Ottawa.