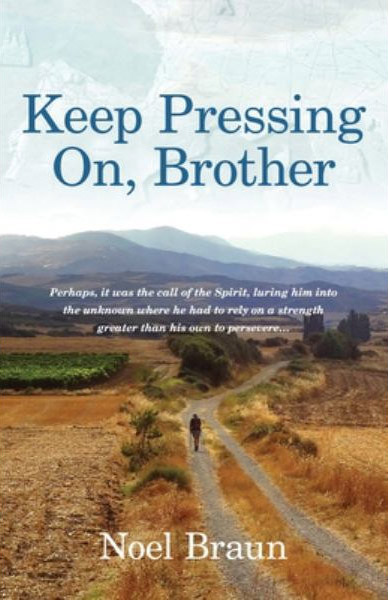 This book is the third Camino memoir by Australian octogenarian Noel Braun, who hails from Jindabyne in the Snowy Mountains. As recently as 2010, at 77 years Noel undertook his first Camino seeking to rediscover himself following the death of Maris, his beloved wife of 42 years. As it has for so many others, the unexpected addictiveness of the Camino challenge and experience took hold, and three Caminos followed, in 2011,2013 and 2015. These are described in his earlier books The Day was Made for Walking, and I Guess I’ll Just Keep on Walking, which now have attracted international publishing attention in Portuguese and Spanish.

In his most recent memoir, Noel’s challenges, experiences and pilgrim interactions from his 2017 and 2019 Caminos from Vézelay to St Jean-Pied-dePort and Geneva to Le Puy-en-Velay were assisted by his fluent French,  acquired only in his later years. The book also reflects his spiritually uplifting engagement and camaraderie with the people he meets and assists. This included, during his time as a voluntary hospitalier in France, using his culinary skills to feed and thus bring together his fellow pilgrims.

At the age of 84, Noel recognized his physical limitations, in terms of daily distances and backpack weight, but in ‘pressing on’ surprised other pilgrims. To that extent the outstanding record of his pilgrimage provides inspiration for others, but perhaps particularly for those who may hesitate about their first or subsequent Caminos because of age.

The oldest pilgrim on record to complete a Camino was 99, followed by a 93 woman with her 60 year old daughter. Many Camino walkers will have encountered pilgrims in their 60s, 70s, 80s and even 90s. When joyfully walking my first Camino in my 60s, I was surprised to meet a number of older pilgrims.

A highlight of those encounters was walking and talking with an 85 year old grandfather from Alicante accompanied by his 25 year old granddaughter from Madrid. Grandpa was fitter and faster than me, had a substantial backpack, but had poor eyesight. Granddaughter’s responsibility was to ensure he did not fall into a hole!

Printed in Australia, Keep Pressing on, Brother is a pleasure to handle, with an attractive cover and colour photographs, good layout, and a very readable font. It has been well edited and proof read – overall it is a credit to the author and its Melbourne-based enabling publisher Sid Harta. Its only lack is an index – with so much information, commentary and reflection, it deserved one.