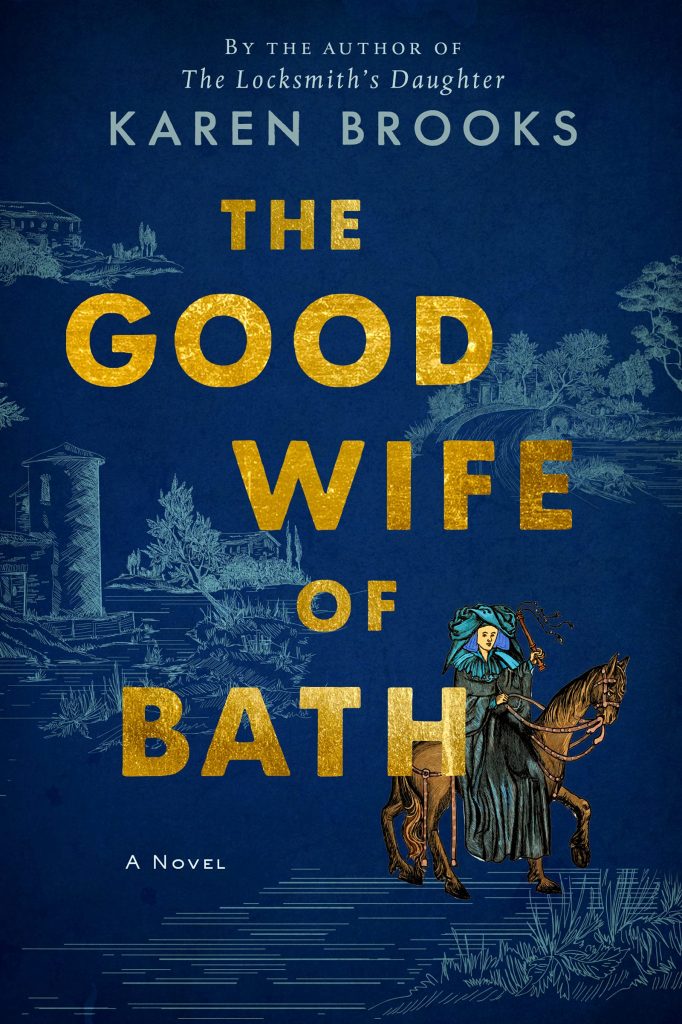 This engaging medieval novel describes a provocative literary character based on Geoffrey Chaucer’s promiscuous Wife of Bath, featured in The Canterbury Tales.

Chaucer mocks this strong woman, reinforcing the rigidly and, sometimes, violently enforced male patriarchy of England in the Middle Ages. But in this novel author, Karen Brooks, gives personal female voice to the Wife of Bath, posing the intriguing question, What would this woman’s colourful life look like if told from the perspective of her determined struggle?

It was 1364, a time when The Botch (Black Death) was still casting its pall across England. A 12 year old peasant, Eleanor Cornfed, is married off against her will to an elderly farmer. She fatalistically realizes that God is not on her side. Her circum- stances pre-determine her sinfulness. Nonetheless she also knows that she’s born under the star signs of Venus and Mars, defining her as lover and fighter. Aided by a head for business, skill at weaving, a kind first husband, the loyal support of god- sibling Alyson, and the wise counsel and friendship of Chaucer, Eleanor turns her first marriage into a success. More marriages follow – some happy, one notably violent – sharp changes of social and material station ensue as Eleanor single-mindedly pursues control over her life.

At story’s end she challenges Chaucer for his demeaning portrayal of her life which, against all odds, has seen her achieve much and lead a worthy life, and which, as the book title suggests, has her casting off her sinful stigma bear the title of Good.

So, So, what on earth has that story got to do with a Camino group whose focus is on long-distance pilgrimages?

Well, pilgrimages to places such as Canterbury, Jerusalem and Rome were a significant feature of the life of Medieval England and Europe. And such journeying ap- pealed to Eleanor as a welcome escape from the pressures of her life. However, they were risky undertakings for women. On a pilgrimage to Cologne she states:

After a blessing from a ridiculously indifferent bishop, we set off from Boulogne, twenty or so of us, Alyson, Milda and I the only women flung together with cutthroats, thieves, heretics, two monks… and, of course, our guide… I couldn’t have asked for more interesting companions.

But for those who undertook these journeys there was a secular appeal that matched religious motivations. These were embraced by Chaucer’s ‘Wife’ as well as Brooks’ Eleanor, who undertook such lengthy journeys with wayfarers at various critical times in their lives. Brooks states in an Author’s Note to The Good Wife of Bath:

The Wife and my Eleanor … are quite open about the fact they enjoy the secular side of the journey as much if not more than the spiritual. Medieval tourism was on the ascent

….. and for many ….. it was a form of exploration, liberation and escapism, in addition to gaining knowledge of other people and cultures .

Just as religious and secular souvenirs adorn the contemporary pilgrim’s journey, there were huge markets for badges and relics available for purchase in Eleanor’s day, which probably attracted her eye, and that of her companions.

Another motivation for Eleanor was that pilgrimages gave her space to reflect on what had gone before and to thoughtfully consider upcoming ventures. As she states whilst undertaking a pilgrimage to Canterbury to consider a marriage proposal by a suitor who would eventually become her second husband:

“Sweet Jesu. The last thing I wanted to do was traipse about with a bunch of reli- gious zealots determined to prove their godliness. But it would give me time to consider Turbet’s proposal.”

One of Eleanor’s chief pilgrimage activities was letter-writing to Chaucer seeking his counsel. The lack of distraction afforded fertile ground for collecting thoughts and applying them to paper. I’m sure many today find on a Camino the space to diarise thoughts, or write to a friend. Chaucer also highlighted for Eleanor the ca- pacity for pilgrimages to offer healing to her following a bruising relationship. As he states prior to her pilgrimage to Jerusalem, such a trip affords:

Time enough to mend what is broken both within this house ….. and much more importantly, within you.

Within the same conversation Eleanor acknowledges the capacity of the journey to help her “find me”(ibid). A final motivation for Eleanor’s pilgrimage concerns grief resolution. In the travelling she can describe her grief, and find a pathway forward. Following the shocking death of her dearest friend Alyson at the hand of her de- ranged fifth husband, she undertakes a second pilgrimage to Canterbury. She tells Chaucer:
It’s time for me to shuck off this cocoon of grief. Before winter sets in, I intend to hunker down in a new place ….. so I might emerge the following spring renewed and ready to embrace life. Do you recall what you said to me, that dreadful night so long ago? You said that the best revenge was to become a better and stronger woman than anyone (including myself) thought possible.

I’m sure there are countless contemporary pilgrims who have also undertaken Caminos to Santiago, Jerusalem, Rome or Canterbury, seeking resolution, either through a quiet space, an appealing icon, or collegial wisdom. Perhaps, through her commitment to pilgrimage as a life-giving tool, Eleanor’s female voice may speak to us across the centuries about the affirmation of life and identity. That alone makes this provocative book worth a read.