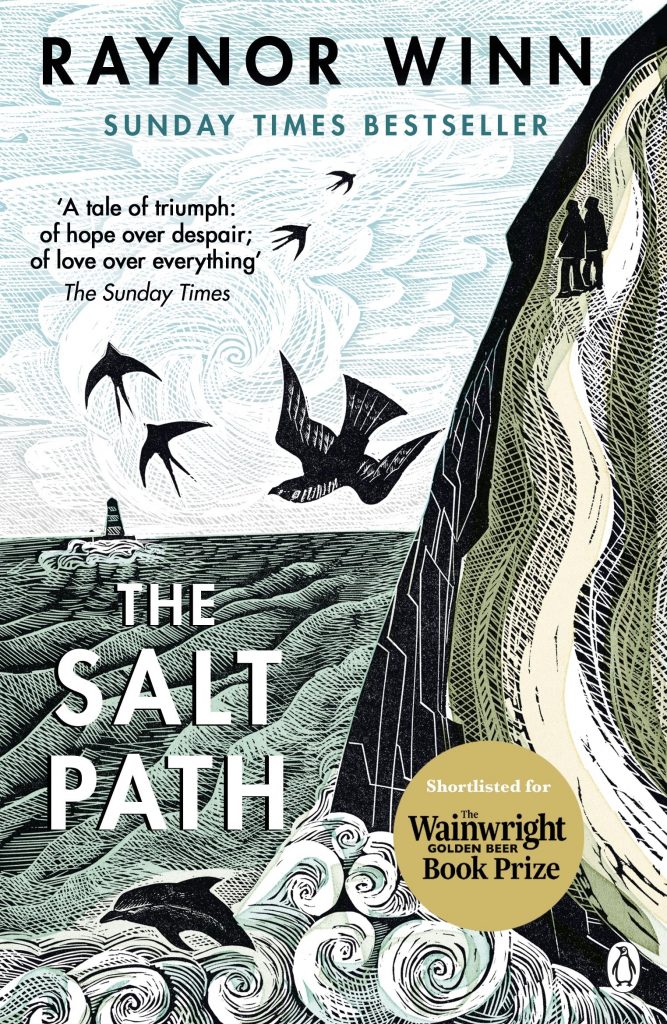 This is the true story of Welsh couple, Raynor & Moth Winn, who discover they’re going to lose their farm where they had reared their two children. A day later a doctor tells Moth that he has a rare, incurable and degenerative brain disease. Within days the bailiffs come knocking and they’re homeless. As they walk out the door of their house for the last time, Raynor says, “We held hands and walked into the light.”

So, in the maelstrom of their shock and grief, what do they decide to do? Against medical advice and with almost nothing but the clothes on their back and a meagre weekly tax credit, they impulsively decide to walk the South West Coast Path, from Somerset to Dorset, via Devon and Cornwall, a mere 630 miles (1000kms) of salty and strenuous walking along sometimes precipitous English coastline. The walk is England’s longest waymarked walk, offering spectacular, but sometimes wild and wind- swept scenery. Though the last section of the path was only formally completed in 1978 in North Devon, it is said to have been established hundreds of years ago by the coastguards of the day who needed to view each and every one of the countless coves, as they patrolled for smugglers.

Why do they undertake such an absurdly difficult journey? Because they need to do something, rather than sit around waiting for a council flat to become available, and for Moth’s health to deteriorate. They start their odyssey from the small English village of Minehead, Somerset, still within sight of the Welsh south coast, not sure how far they’ll get before their bodies and spirits relent. “Perhaps Land’s End,” they say to passing enquirers over the first weeks of their journey. The couple find themselves struggling over an endless succession of disappearing and appearing headlands. Their tent accommodation leads them to often sleep rough as trespassers, sometimes consuming nothing more than fudge bars and cups of tea. Their bedraggled appearance sees them observed by some other walkers to not only be the homeless people they are, but looked down upon in ways to which they had previously been unaccustomed.

However, amidst their hardships, something about the journey starts to shift their thinking from a somewhat downtrodden personal perspective to something more out- ward and spiritual. As Raynor observes during moments of much-needed rest in a church cemetery, “I sat in the graveyard and let the utterly peaceful place wash over me. It was profoundly spiritual, nothing to do with God or religion, but a deep human spirituality. Something of the knot I’d been carrying started to loosen. Maybe there was some power here.” Eventually, over two summers, with an intervening winter spent in a friend’s shed, they complete the entire journey at Polruan, Cornwall, a small village on the English south coast. A kind stranger offers them accommodation in a flat behind a chapel, and Moth undertakes a university course he knows he may never finish.

This highly engaging read is about the human spirit, nature, and a long walk that be- came a transformative odyssey which Raynor and Moth eventually didn’t want to end. And in that sense the South West Coast path was for both of them a pilgrim walk, like the Camino journeys. To my knowledge it isn’t marked in any guide book as an official pilgrim walk. However, through the sense of becoming absorbed into the passing, slowly-walked landscape; through the sense of letting the journey shape your identity; and through carrying just the bare necessities and thus valuing the spirituality of simplicity, this path was for Raynor and Moth a life-giving and most spiritual pilgrimage.