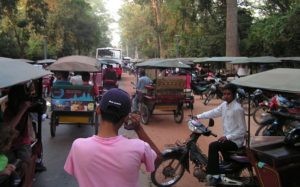 Eleven years ago, at aged 52, I was about three quarters of the way through a 2-year work contract that saw me living and working in Cambodia. Once this contract was completed I would be unemployed. Having no irons in the fire, and no fixed idea regarding what I wanted to do next, I knew that I would need to return to Australia, however I was keen to have some sort of break before making my way home. Travel was what I wanted and it seemed that my upcoming unemployment presented the perfect opportunity to undertake a Camino – something that had been a pipe dream ever since I first heard about it years earlier. Maybe this Camino walk would be a good way for me to transition from Cambodia to whatever was to come next. Yes, a ‘long walk’ would definitely help me work out what I really wanted to do with the next chapter of my life. Decision made!

Time to prepare for this upcoming walk. This was going to be fun. Hours of planning and preparation saw me addressing challenges of how in Asia to source boots, warm clothing, backpack, sleeping bag etc. I also had to figure out some sort of training program. Warm clothing and cold weather equipment were not in high demand in Phnom Penh; however shopping trips in neighbouring Thailand and Vietnam (not an odious task by any means) enabled me to kit myself out with passably suitable attire – even if I did have to shop at men’s clothing stalls to find walking trousers to fit my women’s size 14 frame.

Equipment sourced. Training was next, and this was going to throw up quite a few challenges. I had not worn shoes for 18 months as even indoors, sandals or barefoot was the norm. Wearing boots and socks again was going to take some getting used to. Phnom Penh is hot. Really hot, and really humid. Parks are not in abundance, and walking the pavements is a lesson in dodging pot-holes, people, motor scooters, small goods for sale, metal being welded, barbers and their chairs etc. The only option of getting some miles into my legs would be to find a treadmill, so each lunchtime I headed out from my office on the back of a moto (motorbike) taxi to a 5-star hotel where I had taken out membership of their airconditioned gym. I did look a sight striding out on the treadmill (the best treadmill was the one that faced directly in front of an industrial strength air-conditioner) in my hiking boots and wearing a backpack, alongside other gym patrons in shorts and singlets. I don’t recall by what measure I calculated that 6 kms a day for 12 weeks would surely make me fit enough to tackle 800 kilometres in Spain, but that’s what I went with. 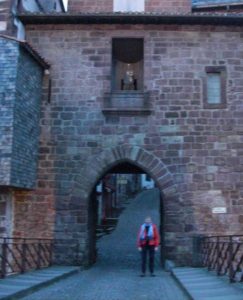 My work contract having expired in late February, I was filled with nervous excitement as I promptly relocated from Cambodia to St Jean-Pied-de-Port within the space of 30 hours. The contrast in temperatures was a certainly a real shock to the system. After two years in Asia my blood had thinned as my body adapted to the tropics, and this meant that I found the cold of winter overwhelming. Day One in St Jean-Pied-de-Port, and I vividly remember Janine, the hospitalera in my very first albergue, taking me to task for wearing my jacket indoors. She could not understand my protestations about the cold. Oh yes, and I also remember Janine, fiercely Basque, taking me to task for mistakenly referring to her as being French. Oops!

Setting off from St Jean-Pied-de-Port in the early morning chill on 1 March was a real eye opener to what I’d got myself into. Apart from the cold, dealing with mud and slush and snow was not what I’d really given any thought to. I quickly realised though that one of the biggest challenges was going to be hills and steep climbs. I was never any good at going uphill, and it soon dawned upon me that my treadmill training back in Phnom Penh had done nothing to prepare me for the upcoming terrain. I can sit back now and laugh about how I used to curse and moan and carry on whenever I encountered a steep hill. Throughout the entire route to Santiago, hills continued to cause me grief. It was only on the very last day, with lots of encouragement from other walkers, that I managed to walk the entire way without stopping to rest when going up hills. Hooray!

There were a few small disasters along my Camino (broken boots, sprained ankle, leaking water bottle saturating my sleeping bag), each being resolved through the kindness of strangers. The only available boots in my size that I had been able to purchase in Asia were a ridiculous design. They had laces like fishing wire that you tightened by turning a dial at the back of the boot. When the wire snapped on one boot as I hobbled into Pamplona, a local shoe repairer standing outside of his shop beckoned me over and fashioned a temporary repair lace for my shoe. He refused to take any form of payment. These boots were subsequently given a complete repair by a lovely guy in a hiking store in Astorga who also refused payment.  A sprained ankle saw fellow pilgrims offering bandages and balms and continually checking in with how I was faring. A saturated sleeping bag, only discovered as I lay my bag out to go to sleep, saw other pilgrims quickly removing their wet clothing from wall heaters so that I could l drape my bag over the heater to dry.

Aches and pains were a constant companion, and I have fond memories of miming symptoms of a troublesome knee to a pharmacist in small village. It was quite staggering how much information we were each able to impart through the use of gesture. I also look back fondly on the restorative luxury of not one but three hot baths that I took when I splurged on a night in a hotel. I have not so fond memories of trying to get my aching body into or out of the bath! Sleeping between sheets that night was also a lovely reprieve from the confines of a sleeping bag.

Whilst I so enjoyed walking on my own, the occasional instances of awareness that no-one knew where I was (no smart phones in 2009) did raise feelings of vulnerability. Those occasions were also quite liberating, and I experienced a sense of pride that I was game enough take on this journey alone. The company of strangers each evening was such fun, and a lesson in tolerance. 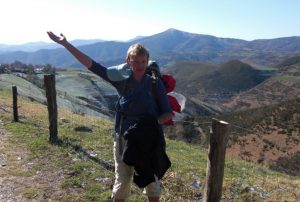 Celebrating… on the Pyrenees at last

One of the most profound lessons I learned through such company was not to be too quick to judge: I remember feeling particularly piqued one evening when a group of 10 arrived late at an albergue and then proceeded to talk and laugh quite late into the evening. I encountered this group for several subsequent nights, and I judged them to be quite insular and private. It was on a chance chat with one of them that I found that they had come together as a group of parents who were each grieving for the loss of a child.  And there was me being cranky because they were disturbing my rest. The fact that they could find anything to laugh about at all must have been quite significant for all of them.

One of the most beautiful experiences of my Camino was meeting up with a mother and her 18 year-old daughter who lived in Santiago. They had started their Camino at Portomarin, and as they set out on the final leg from Monte do Gozo they were joined by the husband and sibling. To see the four of them completing the walk with such love and joy was a truly beautiful thing. The celebratory dinner that I shared with this wonderful family on the night of our arrival in Santiago is one of the most special experiences I have of my Camino.

Reflecting on the impact that the Camino had on my life, I can say that I learned heaps about myself. And it was absolutely a positive experience. However, despite having days where I was consciously determined ‘to think things through’ as I walked, I’m not sure though that it really did help me with the decision about what next to do with my life. More often than not some song from the 70s would pop into my head, and that would be the end of any serious thinking. For some bizarre reason a particularly recurrent song was “Yesterday Once More” by The Carpenters. “…Every Sha La La La, Every Wo O Wo O still shines…” Go figure?! By the way, the next chapter of my life did turn out just fine.

Given the chance, would I do another Camino? Yes—in a heartbeat!