Faced with a spare week before presenting myself in Nájera for hospitalero service, I had the wonderful dilemma of trying to decide where to walk.

Nájera is about a week’s walking from St-Jean-Pied-de-Port and St-Jean is one of my favourite places but I had already been there five times. Inspiration arrived in the form of the Camino Baztán, a 110km route from Bayonne in France and meeting the CF a few ks before Pamplona 5-6 days later. An hour and a half in a bus from Pamplona would see me arrive in Nájera. Problem solved, decision made!

Walking alone is not new to me and I rather enjoy it. However, I also enjoy meeting up with other pilgrims at bar stops along the way and also much prefer dining in company than alone. Yet there are some less well walked routes that call me and a short one of these would be a good introduction to being alone over a period of time. I searched the internet and used information by Gerald Kelly, the Eroski App and the Camino de Santiago Forum to make myself a small guide.

There is a choice on the first day – 14 or 27km though there is the option of detouring to Espelette (24km). However, I had rejected this option as the municipal hostel is no longer operational and the town is 1.5km off the Camino. I opted instead for an easy first day of a 14km stroll alongside the River Nive to Ustaritz.

Not having to rush, I had a relaxed morning in Bayonne before heading to the Cathedral and the Accueil des Pèlerins provided by volunteers from the Amis du Chemin de St Jacques. Credential stamped and extra information about accommodation received, I left Bayonne for Ustaritz. The path is well used by locals who were out walking, cycling or skating. It was peaceful and attractive but unfortunately it was also hard surface and flat which is why, despite my late start, I arrived in Ustaritz early and feeling unchallenged.

Perhaps the volunteer I spoke with in Bayonne saw something in me that I had not recognised myself as he had written down the names and telephone numbers of three BnBs in Espelette. My plan was out the window on the very first day! I don’t reserve accommodation because my preferred method is to walk until I want to stop. This has always served me well in the past but I was to learn that the road less travelled sometimes requires a different mindset. 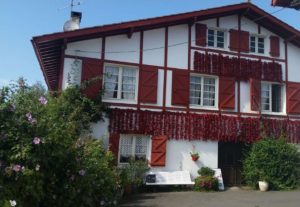 It was Saturday. Espelette, known for its dried red peppers (Piment d’Espelette) is a tourist destination. Tourist destinations are crowded on Saturdays. The hotel was full, the first two B & Bs were also full. Relief when I rang the third to be told that they had a vacancy and, as it was out of town, they would come and pick me up.

As it turned out, the BnB was only about 500m from town which made for a pleasant walk after dinner at a local restaurant. The owners were pilgrims themselves and I was driven back to the Camino the next morning. That thoughtfulness was particularly appreciated in light of the rain which continued to linger after a heavy overnight storm.

The second morning’s walk was broken up with a tea stop at the lovely town of Ainhoa. A couple of kilometres later brings you to the frontier and you are suddenly thrust back into “civilisation” with a tremendous amount of traffic and locals looking for bargain shopping. It was here that I met three Spanish pilgrims though they were lost to sight within the few minutes it took to refill my water bottle.

Thank goodness it is but a short distance in the madness before the trail goes back to nature and peace reigns once more. 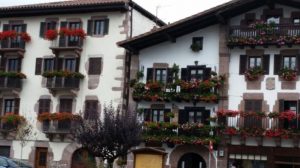 Though the trail passes over a low part of the Pyrenees there are enough hills to give your heart a good workout. One of these was today with a steep climb after Urdax to the Col Otxondo and its welcome picnic area.

Being a city girl, I don’t have experience with large animals and admit to being rather fearful of them, as well as of large unchained dogs. You will usually find me behind another pilgrim if there is a cow or horse on the path. Deciding to walk alone on a less travelled route was an intentional move on my part to face my fears.

The Camino Baztán provided opportunities for me to test my resolve – deep breath, feigned nonchalance and walk ahead without taking any notice of them. They couldn’t have cared whether I was there or not! In fact, one horse even moved off the track as I approached. However, I did give way to a large sow with an enormous number of piglets. Her ferocious look as I took the shortcut through the woods was enough to see me backtrack to the road. The extra 100m or so seemed a small price to pay for my safety.

Amaiur (23km) is a beautiful village with well-maintained historical information at various points, the main site being the remains of the Castillo de Maya at the entrance of the village.

Once again, the pilgrim accommodation in the village has closed and BnB is the only accommodation available. Fortunately my request for a room was successful at the second establishment I tried.

Day 3 was 19km to Berroeta. The guides had warned that though there is a well-equipped albergue in the village, there are no shops or bars so meal provisions need to be bought at Elizondo, a town with all facilities which is conveniently located roughly at the half-way mark of this stage. My guides had also mentioned a restaurant about 2km before Berroeta. Thankfully I wasn’t intending to dine there as it was closed.

The Spanish pilgrims were at the albergue when I arrived and I gratefully accepted their offer to ring the hospitalera for me.

Another strenuous though beautiful walk took me from Berroeta to Olagüe (20km) on day 4. This time the trail went through a gorgeous beech forest with the wide canopy providing welcome relief from the sun. Soft leaf litter underfoot, perfection marred only by vast tracks of thick mud. 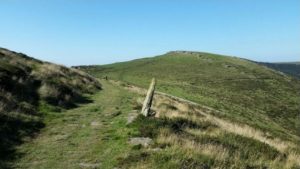 The landscape was constantly changing and, once on open ground, I recognised signs of Roman road base and delighted in walking through history high above the traffic. This route really does offer it all.

The three pilgrims caught me up and we walked for a short time together before stopping for a break at the Ermita de Santiago. Unfortunately it was closed but we took advantage of the stamp supplied to add another sello to our credencials. That hour spent together was the only time that I had company. It was also the last time that I saw these pilgrims. As it was Tuesday, I knew that the restaurant 5km after Berroeta would be closed but was looking forward to stopping at the restaurant in Lantz (15km): however it was not to be as it was closed for renovation. I was not perturbed as the restaurant at Olagüe had received good reviews and I was intending to dine well that night. Unfortunately the restaurant was closed for four days and I was reduced to scratching a meal from the meagre offerings available from the tiny bakery.

The albergue in Olagüe is spacious with a number of rooms each containing accommodation for 4-6. The only other person there was a French pilgrim I had not seen before because he had walked a much longer stage than me. 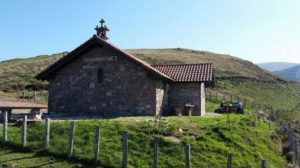 Ermita de Santiago
My last day on the Baztán was about 24km. An easy walk as far as ascents/descents go but the last 12km were on hard surface. Another bike/walk path alongside the river, a bookend to the departure from Bayonne.

I had thought there would be some sort of monument marking the joining of the Baztán with the Camino Francés but heard people speaking English, saw a group of pilgrims coming from my left and knew I was at the junction.

I would definitely recommend the Camino Baztán for those who like to experience a way less travelled. It is a feast for the senses (though perhaps not for the stomach). The Basque architecture is gorgeous and the houses in even the smallest villages are awash with the colour pouring from overflowing potted plants. The trail goes through open fields and forested areas and the overwhelming feeling is one of being surrounded by natural beauty.

Though the route is well signposted, I took the added precaution of downloading it onto Maps.me and did refer to the app a couple of times for reassurance.