When I walked the Camino Francés for the first time in 2011, I was disheartened by the amount of trash I saw along the trail. I ruminated for days over how people could walk an ancient spiritual path and leave anything but footprints behind. The idea of returning to the Camino in the future to do my part to clean it up was a frequent thought.

Fast forward six years. My second Camino. The trash called out to me once more, especially around the trees. What could have been an ideal resting spot for a picnic or much-needed shade was now a tree-turned-public-toilet. Nearly every tree I approached was surrounded by used tissues and human waste. It defied explanation. Particularly along the French route, it’s rare to travel more than 10km without a trusty café-bar or albergue nearby. Are pilgrims unaware of this, or of their own bodies, or of the environmental impact of the waste? The short answer appears to be… yes.

Did I take immediate action to remedy any of this? Sadly, no. The reality is, for all my good intentions, the last thing I wanted to do while walking all day fully loaded with backpack and trekking poles was stop and collect some rubbish. Bending down with a full pack seemed a Herculean task. So my cleanup efforts were limited to areas where I was already resting sans rucksack. It was something – but I was not satisfied. 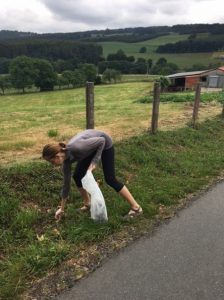 In 2018 I was once again on the Camino. Round three. Time for action. I served as a hospitalera in Galicia and spent my free time picking up trash in earnest. Not wanting to add to the existing waste, I converted the albergue’s disposable pillowcases – destined for the waste bin each morning anyway – into dual-purpose makeshift garbage bags. During the two-week stint I assumed responsibility for the 3km stretch on either side of the albergue and rounded up a dozen bags of waste. Success!

The experience was not without its surprises. More than one passing pilgrim snapped a photo of me collecting trash, which I found bizarre. Another shot a video. And then there was the pilgrim who, upon seeing me in a ditch on the opposite side of the path, picked up an empty can from his side – with his backpack on, mind you – and approached me with a huge smile as he deposited the can in my pillowcase-now-trash-bag. It was a moment in equal parts touching and humbling. It inspired me to continue. 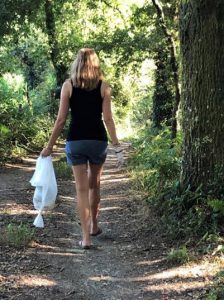 I scrapped my original plan of writing along the more remote Camino del Norte during my remaining five weeks in Spain. Instead, I returned to Roncesvalles to resume my cleanup effort. I devised a three-day strategy. Day One: walk all day with my backpack, get a room for three consecutive nights and write in the evenings. Day Two: leave the pack in the room and walk back, collecting trash in the direction I had just traversed the day before. Day Three: walk ahead, clearing the path I would be walking tomorrow. Then repeat. Obviously, I was not able to cover the entire French route in five weeks with this strategy, but I put a serious dent in the Roncesvalles-to-Pamplona, Burgos-to-Sahagún and Ponferrada-to-La Faba sections. Total number of bags collected on my ‘Camino de Limpieza’ – 65. Not bad.

Collecting dozens of bags of rubbish isn’t the only way to serve the Camino and have a positive impact. My transformation into eco-peregrina went through four stages and each one makes a difference:

Stage 4 is where you come in. I’ll be back on the Camino again, trash bags in tow.

Care to join me?

Karin is the author of 10 books, including ‘Your Inner Camino’ and ‘After the Camino’. (which were reviewed in Issue 30, Sept 2019). Part of the books’ proceeds go toward keeping the Camino clean. Email Karin at support@KarinKiser.com for details of her next Camino Cleanup Program and Retreat.