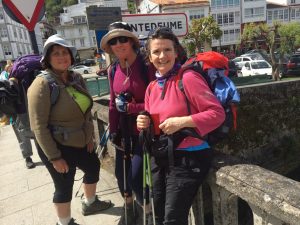 I walked the Camino Inglés to celebrate 55 years of friendship with my friend – another Jennifer. What a beautiful experience it was … so many glorious churches and bridges, a few tough paths but with restful combinations of minor roads, back roads through villages and delightful glades. The albergues – mostly new – were all great too. 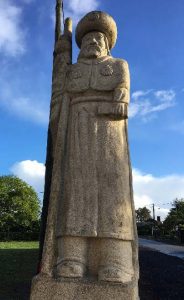 We flew from London to A Coruña, where we saw the Roman lighthouse and Tower of Hercules in the morning, before catching the bus to Ferrol later in the day. The Tower, which dates from the 2nd century (and restored in 1788), guided the original pilgrims from England and Flanders.

We found the tourist office in Ferrol was closed, so it took us some time to find our first way-marker, but from here we walked to Neda arriving at 7pm – a delightful walk by the sea, and a wonderful introduction to Galicia.

The next day was a long and hilly 25.5k to Miño via Betanzos. At the end of the day, the albergue was hard to find, but fortunately we’d had some great meals at bars along the way, and even a taste of the Galician herby liquor, Orujo, with the compliments of the bar owner who could see that we were pilgrims.

It is worth pausing in Betanzos – the helpful tourist office recommended a lunch spot off the square, where we enjoyed some great grilled pimientos while watching the locals.  Next stop was at Miño – another long day’s walk. But we were rewarded here with a delightful albergue with only 5 pilgrims who teamed up for dinner at a great new bar, Museo.

Then it was on to Bruma and a restored country house with a lovely stone circular hearth. 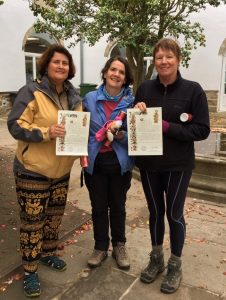 Bruma to Sigüeiro was 24.1km with some hills, but another lovely walk through villages and eucalyptus plantations. It was fun seeing bark and oak leaves mixed together on the paths, also some hazelnuts. There were several Vibernum bushes in full bloom in gardens as well.

The last day was a 17.6km walk from Sigüeiro to Santiago. Sigüeiro has a beautiful new albergue, Camino Real, with breakfast, as well as new bunk rooms with sheets on the beds. It was a slow downhill walk with two coffee bars within the first 7km. Part of the way is through a poligono, a commercial industrial area (with coffee and sellos) but then it’s back onto trails.

The walk in to Santiago de Compostela is not on cobblestones, so is very pleasant. Entry to Santiago passes the San Francisco convent (16th century) church, near the Parador, Hostal dos Reis Católicos, founded in 1492 as a hospital for pilgrims.

We found that distances varied between different guide books and the pamphlets we obtained from the tourist offices. At times the difference was up to 5km which can make a difference to blistered feet! We advise pilgrims to ask for the local guides produced by the Xunta of Galicia.

The Camino Inglés is a delightful walk. Enjoy!

(NOTE: Parts of the Camino Inglés have been re-routed recently. It is advisable to obtain the latest edition of any Guide Book, or check with tourist authorities along the way.)