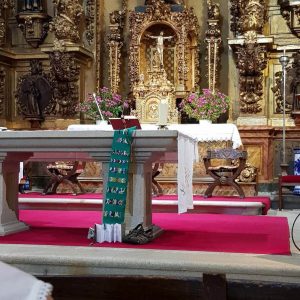 Father Gerard’s stole, rosary beads and Bible which we carried along with his sandals to Santiago, and which we placed on the altar at each Mass after he died and at his funeral

Our 200km Camino began in Barcelos, Portugal. A 10-day walk was planned with the final 2 days in Santiago de Compostela. There were 15 in our group and we were led by Father Gerard. He was our spiritual leader and also our slightly reluctant tour leader. The Camino Travel Agency had organised all logistics, hotel bookings etc, for which Father Gerard was very thankful.

But on the 4th day, Father Gerard very unexpectedly died. We had only known Father Gerard for 4 days. We were starting to get to know a very charismatic priest who enjoyed people, a beer, Facebook, a good laugh and much conversation. He could be very loud but at the same time there was a gentleness about him. He was 66 years old. He was the parish priest in Chad in the UK and was interested in establishing Spiritual Walking Retreats in Spain. This was the first time he had led an organised tour. He had spent 12 years in El Salvador and, at his Mass on the day before he died, the stole he wore was from Guatemala.

Father Gerard died in Valenca, Portugal, just on the border of Spain. We were staying in a hotel just near the old walled city.

On the morning following his death, Johnnie Walker from the Camino Chaplaincy visited us all at Valenca. We knew that there was support for us and we all wanted to continue our Camino in spirit with Father Gerard.

We continued our attendance at the Masses which had been organised along the way. They were all said in Spanish. A few of us could speak Spanish and we also had some gifted singers to help lift our spirits at these masses.

What could we do for Father Gerard? We carried his stole from Guatemala, his rosary beads, his Bible and his Camino sandals. They were placed on the altar at each of our Masses and also at the special Mass that was said (and sung) in his honour at Santiago de Compostela. Then his stole, beads, Bible, and sandals were taken to the UK and placed on the altar on the day of his funeral. Mass was a central theme for our Camino. Father Gerard had planned these Masses, where we as pilgrims would attend a Mass being celebrated by the local community, or the local priest would open up his church especially for our group.

On the third day we reached Ponte de Lima. It is one of the oldest towns in Portugal and dates back to Roman times. Just near the old medieval bridge that runs over the Lima River, we had Mass in a very old and imposing Catholic church, the Igreja da Misericordia, Largo da Matriz. In his homily Father Gerard posed the question: “If these walls could speak what would they say?” Looking around, it was a big imposing place, built with large grey stone. Indeed what would they say?

At our first get-together, Father Gerard outlined the way of our Camino together. We would meet at breakfast and then at night again for Mass and dinner. The walk was up to each of us to do as we saw fit. Most often we walked with others in our group. We also met up with others walking the Camino and would spend the afternoon walking with them. We walked at our own pace.

The Portuguese walk was not too challenging. There were a couple of fairly difficult climbs, especially after Ponte de Lima. Mostly the walk took us through vineyard after vineyard along a broken Roman Road. We passed over old Roman bridges and walked along very large cobblestones. Along the way the yellow arrows took us through Spanish and Portuguese farming properties and we watched as the grapes were being collected for crushing.

The thanksgiving service for Father Gerard was held at the Jesuit Church in Santiago de Compostela, the Iglesia de Santiago. It was a wonderful tribute. Afterwards we celebrated Father Gerard’s life at a local restaurant. I ordered beer. Our host thought that being Australian I needed something more – another beer arrived at the table, this one came in a large balloon glass more than twice the size! It had been both a very difficult and rewarding Camino. And on this last day we celebrated. It was fun, boisterous and loud, very much in the spirit of Father Gerard.

The words of T S Elliot’s poem Little Gidding were a fitting finale for our Camino with Father Gerard:

…With the drawing of this Love and the voice of this Calling
we shall not cease from exploration
and the end of our exploring will be to arrive at where we started
And know the place for the first time.