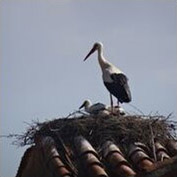 Always a joy seeing storks and nests on the Camino

Following Caminos in Italy in 2017 and France in 2018 we decided to return to Spain for our 2019 walk and as usual we were looking for something different. This year we decided that we would walk the Levante from Toledo to Zamora, followed by a short section of the Via de la Plata then the Sanabrés from Granja de Morerula to Santiago de Compostela.

Walking with me this year was my brother Phil and friends Jane and Paul. Having walked several Caminos in Spain previously, this year we adopted a more casual approach to our walk. We arrived in Toledo with a list of stages from Mundicamino, an accommodation list and a GPS track. We did not take a guide (none available for the Levante) or a map and put our trust in the yellow arrows knowing that we always had the GPS track as a backup.

Toledo is a lovely city although, being only a short distance from Madrid it is full of tourists and souvenir shops all selling knives, swords and anything else with a sharp edge. Notwithstanding we spent a pleasant day there visiting the Cathedral and having our credentials stamped before commencing our walk. 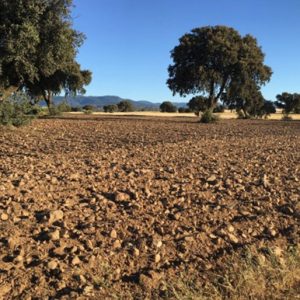 With our usual aplomb, on leaving out hotel in Toledo we immediately became lost and had to resort to the GPS track to find our way out of the city. Finally we found our first yellow on the outskirts and headed for Torrijos. While the walk started well skirting the river, it quickly deteriorated to a route following a newly constructed road. The walk improved in the afternoon through fields of wheat, barley, tomatoes and garlic. Eventually we arrived in Torrijos footsore and tried having completed 32.1km on our first day.

Walking improved from Torrijos, through more cereal crops with the occasional grove of olive trees. When we approached Escalon we came across our first holm oaks and nesting storks. Storks and Holm Oaks are a favourite part of walking in Spain. Quite a lot of the walk between Toledo and Zamora were through cereal crop land and as similar walking the Meseta on the Francés although there were climbs as well as open grazing land with in-dispersed holm oaks, broom, wild lavender and other shrubs. The landscape between Escalona and San Martin de Valdeiglesais was exceptional, with stone pines and more holm oaks.

One notable climb was the hill up to Cebreros. While not being particularly steep, it was a long hot climb, rewarded at the top be the best beer in Spain. The beer was served in frozen half litre glasses cold enough to form ice crystals.

Apart from Toledo we visited some lovely towns and cities including Escalona, San Martin de Valdeiglesais, Arevalo, Medina del Campo where we witnessed the local version of ‘the running of some very disinterested bulls’, Toro, Zamora and the best of them all, Avila with it’s magnificent walls, said to be the best preserved city walls in Europe. In my opinion Avila is every bit as good as Toledo. An additional bonus is that it does not have hoards of tourists. We took our first rest day in Avila.

Running of the bulls

Accommodation between Toledo and Zamora wasa mixed bag and included hotels, casa rurales, hostels, municipal albergues, a seminario and a palacico. Jane has a preference for higher end accommodation and albergues were used only when no other accommodation could be located. Albergues produced some interesting experiences. At San Bartolome de Pinares we found ourselves locked in during the afternoon, resulting in an interesting conversation using our almost non-existent Spanish, trying to explain the situation over the phone to the caretaker. The albergue in Villalazan was located in a kindergarten, and was fully equipped with Peppa Pig posters and ex-hospital beds. The only accommodation issue that we encountered was in Hernansancho where we understood that there was an albergue. On arrival we were told that there was no accommodation in the village and that we would have to return to Gotarrendura for the night. As has been our experience in the past, the kindness of the Spanish people came through and a local horse breeder put us in his car and drove us forward to Arevalo.

In this area of Spain, televised bullfighting was the entertainment of choice in several of the bars that we visited. We spent our time cheering the bull and playing hangman to avoid the more unpleasant aspects of this supposed sport. The highlight was watching the expressionless face of a matador while being tossed in the air by a bull with it’s horn caught in his ridiculously tight trousers.

From our start in Toledo, to Zamora, we completed 280km and only met two other walkers in San Martin de Valdeiglesais. Both were Belgiums who commenced the Levante in Valencia. Zamora was the departure point for Jane and Paul who headed to the Mediterranean for a couple weeks in the sun at Alicante. Having spent time in Zamora in 2014, Phil and l headed off the next morning on the Via de la Plata towards Granja de Morerula where the Camino Sanabrés  commences.

Not being as particular as Jane in relation to our accommodation, Phil and I elected to stay where possible in albergues. After our rather lonely walk on the Levante, this would allow us to meet other pilgrims. This strategy immediately failed as we were the only occupants in the municipal albergue in Riego del Camino on the Via de la Plata. Finally on arrival in Tabara we met other pilgrims at the municipal albergue.

From Tabara we walked with Jac, a 75 year-old Dutchman who could walk like the wind. Jac had also walked the Levante, commencing in Valencia and must have been a day or so ahead of ourselves. It was good to finally have some company. Later we caught up and walked with with a group consisting of a Spaniard, two Italians and two French who had walked the Via de la Plata from Seville. We estimate that there were between 15 and 25 walking pilgrims per day on the Sanabrés  in mid-June. In addition there were quite a few cyclists.

Around Puebla de Sanabria we saw our last stork and the holm oaks gave way to a new species of oaks with leaves similar to the common English oak. Disappointingly, before A Gudina we saw our first Australian eucalyptus trees which have become endemic across Galicia. 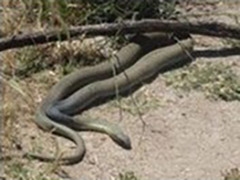 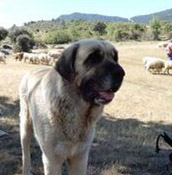 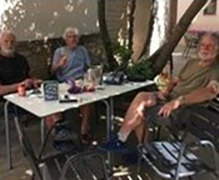 Paul, Phil and John enjoying a well-earned drink at Toro 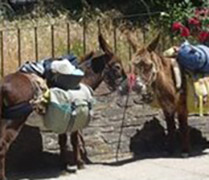 The Sanabrés is a nice walk although there were more hills than on the Levante and it was very pretty once you move into Galicia with a lot of water and shaded sunken lanes. The towns and villages on the Sanabrés were not as nice those on the Levante, with the only town of note being Ourense where Phil and I took our second rest day.

From A Gudina we walked with Sgoirse from Ireland who had been mauled by a pair of dogs two days earlier. After a night in hospital and a day’s rest she was back on the road again, although subject to a series of rabies shots. Sgoirse was not carrying a stick and was by herself when she was attacked.

Arrival in Santiago was a surprise as for the first time we were able to see the towers of the Cathedral as we approached the city. Approaching Santiago on the Francés or the Portuguese does not provide this spectacular view. Obviously Martin Sheen in the film ‘The Way’ must have deviated to approached from the south-west or the film-makers have taken us for a ride yet again. On arrival In Santiago Phil and I were three days ahead of our initial schedule and decided that we would continue walking to Fisterra. It was good to see that all of the scaffolding had finally been removed from the front of the Cathedral.

After visiting the Pilgrim Office, obtaining our Compostelas, and watching the pilgrims arrive in their hundreds on the Francés, we spent a quiet night in Santiago and were back on the road again. The first day’s walk from Santiago to Negreira was probably the nicest day on our Camino, through forests, pretty farmland and lovely villages.

For the following 2 days we were shrouded by mist — a bit disappointing. On approach to Fisterra we were greeted by loud explosions that sounded like Lord Nelson was again offshore taking on the combined Spanish and French fleets. Closer to the town we realised that we were hearing fireworks celebrating Corpus Christi Sunday. We arrived in time to witness the parade up flower-bedecked streets. I am yet to understand why the Spanish would waste a good fireworks display by putting it on during the day. After finding accommodation, Phil and I headed to the lighthouse to complete our walk. Again we were disappointed as the sea mist obscured both the lighthouse and any view the ocean below.

After a night in Fisterra we returned to Santiago by bus for a final day before heading back to Madrid. We did not attend the pilgrim midday mass as the Cathedral interior was closed for renovations prior to the 2021 Holy Year and having been to Santiago four times previously, attending a different church did not seem appropriate. While access to the Cathedral’s crypt and to the statue of St James was available, the line of waiting pilgrims and tourists was very long and we quickly made the decision to avoid the crush and save our visitation for the next time we arrive in Santiago.