The Canberra Centenary Trail (CCT) was created in 2013 as part of Canberra’s 100th birthday celebrations, and is a 145km loop designed to encompass the best of our urban and natural environments. It includes Parliament House, the Australian War Memorial, the Australian Institute of Sport, Mt Majura, Mt Ainslie, Mt Stromlo, Black Mountain and a beautiful section along the Murrumbidgee River.

The trail is divided into 7 sections and can be completed by bike or on foot, sometimes with slightly divergent routes. It can be attempted as a 7-day circuit walk, as most end points have a range of accommodation options nearby, including some campgrounds. However, most people tackle the trail a section at a time and treat each as a discrete day walk. There is only one section you can do alone by parking at the end point and then taking public transport to the start, but you will need at least two cars to complete all the other sections as day walks. I walked the trail in 2014, sometimes alone and sometimes with a friend—we created slightly different sections to make logistics a little easier. And if you can orchestrate an end-point that offers good food and a glass of wine then why not bend the rules! 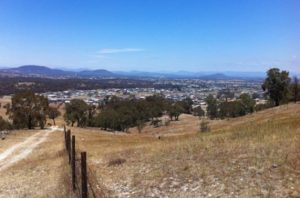 The view back to Canberra from the trail

This beautiful section of the trail mostly follows the northern ACT border across undulating hills offering picturesque views to the south across Canberra and the Brindabella Mountains beyond. It offers the only purpose-built campground for CCT walkers but facilities are basic (picnic shelter, drop toilet and water tank, but don’t rely on this for your water supply). Take the side trip up to One Tree Hill for stunning views. The trail also passes through the lovely village of Hall, where there are a number of cafes, as well as some historic buildings and a heritage centre. Once you leave Hall it is only a few extra ks to your end point at Gold Creek (no gold and no creek). It was apparently named after a race horse!

Logistics: This section requires two cars. In Forde, park at the shops or Mulligans Flat Nature Reserve car park. In Gold Creek, there is plenty of parking. There is no food or water until you reach Hall, so bring enough for the day. We finished with a cold beverage and dinner at the George Harcourt Inn at Gold Creek.

This section starts with some urban walking, but after leaving Belconnen the path returns to nature with a walk over Gossan Hill to GIO Stadium and the AIS. Tip: drop by the AIS Visitor Centre for a 90min tour which includes some fun interactive exhibits, enabling you to try your hand at sports such as wheelchair racing, downhill skiing and performance rowing. After leaving the AIS, the serenity continues as the trail passes through the Bruce Ridge and Black Mountain Nature Reserves to reach your end-point at the Telstra Tower car park.

Logistics: This section requires two cars. At Black Mountain, park in the Telstra Tower car park. There are a few lunch options: at the 6km mark, on Lake Gininderra, there is Café Birrigai. Other options are just off the trail in Belconnen, at both Westfield shopping centre and on Emu Bank. 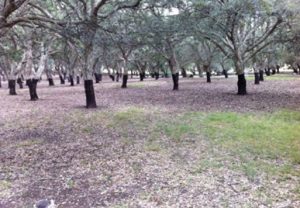 This picturesque walk takes in the western side of Black Mountain and the Aranda wetlands, where you are guaranteed to see kangaroos if you start early. Once you cross under William Hovell Drive, you enter a magical 100-year-old cork forest, the largest mature commercial plantation of cork oak in the southern hemisphere. It offers a cool respite from hot summer days. Interestingly, there were more cork plantations planned for Canberra, however the order of oak acorns never arrived from Spain. At the time, the First World War was still raging in Europe, and the ship that was carrying the consignment was torpedoed and all 30,000 acorns were lost at sea.

Once leaving the forest, you climb up to the National Arboretum where you can stop for a bite to eat and admire views east across Lake Burley Griffin. Opened to the public in 2013, the Arboretum offers a café, visitor centre and children’s playground and is the only monocultural arboretum of its size in the world. Work began in 2005 with the aim of honouring the vision of Canberra’s designer, Walter Burley Griffin, as well as restoring the area after significant damage due to the Canberra bushfires. It will take some time to achieve design objectives, but
progress is clear even after 8 years. After leaving the Arboretum, you drop back down to the lake, cross the dam wall, and then follow the Molonglo River until reaching Coombs, after which there are only a few extra kms to the end point.

Note: Very close to your end point is the moving Bushfire Memorial commemorating the impact of the 2003 bushfires, the resilience and recovery of the people who were affected, and all those who helped them.

Logistics: This section requires two cars. At Mt Stromlo, you can leave your car in the car park for the Stromlo Forest Memorial, located near the corner of Cotter Road and Swallowtail Rd. The only place to buy lunch is the Arboretum, otherwise BYO food and water. 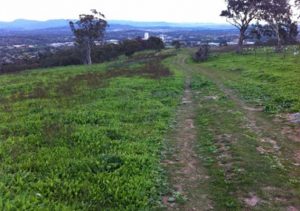 Along the Tuggeranong trail

This is a long day so start early. (The official length is 21km, but my app measured 26.13km.) This section follows a ridge-line skirting the outer suburbs of Canberra, and offers some beautiful views of the Brindabellas to the west. The first four suburbs you skirt around —Duffy, Rivett, Chapman and Kambah—were absolutely devastated by the 2003 bushfires, with many homes indiscriminately destroyed while leaving houses next door untouched. Its hard to imagine now – new homes have been built and vegetation re-established.

After skirting Mt Arawang, you will turn down Kambah Pool Rd for a rather long, uninteresting walk down to the Murrumbidgee River. There is the option of knocking at least 5km off the distance by taking a short-cut through Urambi Hills (turn-off about 3km down Kambah Pool Road), but unfortunately you will be cutting out the most spectacular part of the walk.

Once reaching Kambah Pool, you start my favourite part of the entire CCT, the 7km section along the Murrumbidgee. The elevated path takes you on an undulating journey high above the river and offers intermittent spectacular views along the river valley and the rocky gorges either side. It is also worth noting that Kambah Pool offers the ACT’s only official nudist bathing area! 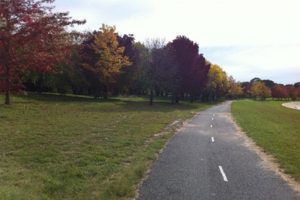 Along the Tuggeranong trail

Logistics: This section requires two cars. At Mt Stromlo, you can park in the car park for the Stromlo Forest Memorial. At Tuggeranong there are quite a few options but we parked just down from the Alpha Hotel as parking has no time limit. There is no water or food available on this section of the trail, so BYO everything.

This is the longest of all the sections but is still a really enjoyable. Leave early to complete the walk in daylight. You could split the section into two, and shorten the walk by catching a bus from Red Hill or Isaacs shops back to Parliament House.

From Tuggeranong Town Centre, the trail passes through a few leafy suburbs before entering a series of consecutive nature reserves. Here there are options for two side trips, one up to Isaacs Ridge and one to the summit Red Hill. But I recommend you visit these separately. Once you reach Red Hill, you pass through some of our oldest and most expensive suburbs, before reaching Parliament House.

As an aside, I highly recommend changing the route slightly once you reach Red Hill shops. While the map recommends taking a trail that runs behind Mugga Way, I suggest walking along the actual street. Mugga Way, sometimes referred to as Millionaires Row, is home to over 15 chanceries for diplomatic missions, showcasing some of Canberra’s grandest architecture and
gardens. (No 25 Mugga Way—not a chancery—sold in 2000 for $8 million, setting a new record for Canberra.)

Logistics: This is the only section where you have the option of using public transport. If you are walking on the weekend, which I recommend, you can leave your car at the car park between the Treasury and Commonwealth Ave – there is no charge on weekends-and take the R4 (Blue Rapid) bus to the end of the line at Tuggeranong Town Centre. From there it is a short walk to the start point. There are a few places to buy water and food along the way – Isaacs Shops are not far off the trail, and the trail passes by Red Hill shops.

This is a lovely short walk that initially takes you past the government buildings of the Parliamentary Triangle, along the shores of the Central Basin of Lake Burley Griffin, and up Anzac Parade to the Australian War Memorial. If you have a spare hour or two then I would recommend a stop here – there is a lot to see. And if you have the time, come back just before 5pm any day except for Good Friday or Christmas Day. The war memorial puts on a very moving closing ceremony, and includes bagpipes and the Last Post.

After the war memorial you leave the urban environment behind and head into the peace of the Yellow Box grasslands of Mt Ainslie. This was my training ground for my first Camino in 2013 and I got to know this mountain very well. On a weekend especially, you will encounter a wonderful mix of walkers, runners, mountain bikers, and bird watchers who take advantage of the trails that criss-cross this mountain. From Mt Ainslie you cross a saddle to Mt Majura, where you have the option of a side trip to the summit. It is worth noting that there is the option to bypass the summits of both mountains, instead skirting around the bases. But I strongly recommend hiking up at least one of them as the views when you get to the top are fantastic! My recommendation would be Mt Ainslie but take your pick.

Logistics: You will need two cars for this section. Leave one car at Parliament House and the other at the car park for Goorooyarroo Nature Reserve, located on Horse Park Drive, just off the Federal Highway. There is a café at the war memorial, but other than that it is BYO food and water for this section.

This short section is all nature park, with the first section passing through Goorooyarroo Nature Reserve, and then moving into Mulligans Flat Nature Reserve. These two nature reserves are part of the Canberra Nature Park, and they protect the largest remaining Yellow-Box-Red Gum Grassy Woodland in the ACT, as well as a host of native fauna. Mulligans Flat also contains a 485 hectare sanctuary, protected by a predator-proof fence, that aims to provide a safe haven for species that are vulnerable to predation by foxes and cats. [Incidentally, Mulligans Flat is reportedly named after an Irish convict, Edward Mulligan who was convicted in 1847 of stealing three shirts from a clothesline and subsequently found himself shipped off to Sydney. Mulligans Flat became the name of the land grant given to Mulligan after he was granted his Certificate of Freedom in 1834.] Once you leave Mulligans Flat, it is only a short walk to Forde shops, where you can celebrate your achievement with a nice lunch at the Frankies at Forde café.

Logistics: No food or water for this section so BYO everything.

Maps and more information on the CCT can be found at environment.act.gov.au