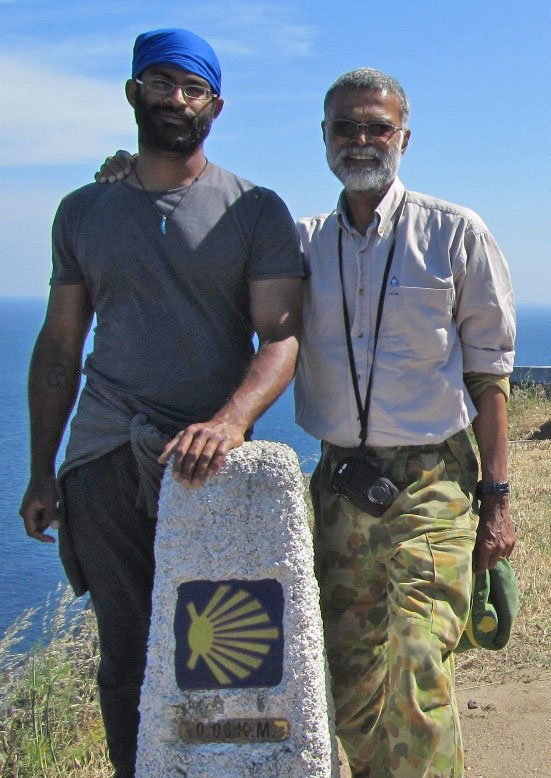 Father and son at Finisterre

Many of my friends and colleagues with whom I have shared the story about walking the Camino with my son have told me, “I wish I could do something like that with my own son, but…” It goes without saying that most fathers and sons harbour an unspoken yearning for a closer bond with each other. But as males we are congenitally endowed with the emotional range of drone bees – and so have difficulty expressing this need to each other.

I first heard about the Camino from my son Shivantha. Originally it was his idea of undertaking this journey – even telling me “Maybe, Thaththi, one day we could walk the Camino together, just you and I.”

Pondering on this pilgrimage called the Camino, I realised I would have to take six weeks off my busy working life and spend this time walking some 800ks across Spain. My colleagues thought I was mad. Was I serious in wanting to take time away from my university teaching job and my busy role as a family doctor, losing so much income in the process? Would what I was going to lose financially be made up for by what I would gain spiritually and emotionally?

But when I told my son that I had bitten the bullet and decided to finally make this journey we had often talked about, he promptly agreed to join me. As the journey drew closer, however, I began to have doubts. I was as ready as I would ever be – but what about the other human being involved in this enterprise, my son? Was he as keen on spending this time with me as I was with him?

I had my answer one evening in Villafranca del Bierzo as we sat on a bench by the Rio Burbia, finishing the bottle of wine that we’d bought to accompany the zamburinos, chorizo, pimientos and cheese that made up our dinner. Shivantha suddenly turned to me and said, “You know, Thaththi, I can’t think of any of my friends’ fathers or my father’s friends who would take the time off their work to do this Camino with their sons.”

People undertake the Camino for various reasons – to mark retirement, to fill the gap between studying and starting their first job, while some, facing a turning point in their lives, to take time out to decide what to do next. Others undertake it as a challenge of fitness  and stamina to achieve a predetermined goal measured in terms of distance and time. There are yet others who do it in memory of a departed loved one – and perhaps there are still some who walk to obtain forgiveness (of at least some of their sins).

Walking in company allows you to meet folk from different parts of the world and different walks of life – folk you would never have met if not for the  Camino and with whom you develop friendships that last long after you complete the journey. Walking alone provides time to think, reflect and contemplate – something for which the rat race of modern life leaves little time.

But walking the Camino with your adult child provides an amazing opportunity to reconnect – and share time with each other. Spending those long hours with him, observing him handling various situations that arose during our journey and having the privilege of so many evenings in his company, allowed me to realise that the baby I carried, the toddler who used to sit astride my neck and pretend I was his elephant steed, is now a grown man, as capable as (or more capable  in many ways than) his father. He has over the years developed the resources and personality – as well as a sense of fair play and compassion – that will help him to make his way in life. I as his father can rest assured and be grateful.

There were many times while walking together that one of us noticed some sight or event that initiated a thought – an association of ideas or triggering of memory – and when that one of us then started talking about this to the other of us, the latter would look up in surprise and exclaim, “But that is exactly what I was thinking about!” If it was me responding, I would exclaim, “That’s amazing!”, while the same amazement would be expressed by Shivantha as “That’s weird!” Same difference.

My son and I have similar views on some matters and radically different views on others. I have come now to understand that parents pass on to their children, through the nature of genes and the nurture of upbringing, common patterns of thought processing and shared memories. I am tempted to paraphrase T S Eliot’s words from his poem ‘Little Gidding’:

And know this person for the first time.

If truth be told, walking the Camino with my son was one of the best things I have done in my life.

The beautiful 6-arched Romanesque ‘queen’s bridge’ over the Rio Arga, at Puente la Reina, was named after Queen Muniadona, wife of King Sancho III, who built the bridge for the use and safety of pilgrims

Sanjiva was a presenter at the AusCamino Festival & is author of ‘Strangers on the Camino’.