Many of the churches and cathedrals along the Camino routes were built during the Middle Ages. The 11th and 12th centuries marked the heyday of the pilgrimage. After Rome and Jerusalem, Compostela became the most important destination for Christians. The Protestant Reformation in the 16th century was devastating for Catholic pilgrimages, and by the 19th century, the Camino had nearly died out. But as we know, it has become popular again in recent years, often as a personal and spiritual journey of discovery.

Saints, or people who had a close connection with God, were especially popular in the Middle Ages. For me, paying attention to the saints and trying to find out more about them is one way of becoming connected with the pilgrims then, as well as now. On our first Camino walk along the Camino Francés, I remember being rather overawed in the big cathedrals – so much to look at, so many statues of saints, so much gold, so many depictions of people. Who were all these people?

On our second walk, this time along the Portuguese Camino, I took more notice of these saints, particularly the female ones. I had never heard of most of them apart from Mary and was intrigued to see if I had some connection with them. A saint can be a patron saint of a particular cause, profession, or area, or invoked as a protector against specific illnesses or disasters. I’m not particularly worried about the details of a saint’s life or the veracity of the story – for me, it’s more about what they symbolise or represent. 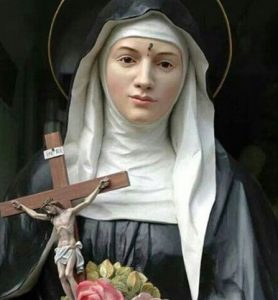 When I came home from the Camino, I saw that in my notebook I had written about St Rita, an Italian woman who had an arranged marriage to a nobleman who didn’t turn out to be very noble at all. In fact he was very abusive. I did not take a photo of her statue but have found a photo of her online. Once her husband had died of bubonic plague, she was then able to enter the monastery and lived a considerably long life. 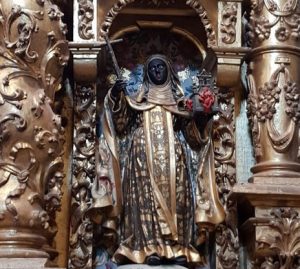 In Tui Cathedral, Spain I came across St Ephigenia of Ethiopia. She’s a folk saint or popular saint who converted to Christianity and then was consecrated by St Matthew.

Another saint we came across, this time in a much more humble chapel, was St Martha – Martha the sister of Mary and friend of Jesus.

We took the Spiritual Variant route which is said to follow the route which James’s followers took when they brought his body back to Spain after he was killed in Jerusalem. James’ followers did not have the good fortune to go by fast rubber dinghy as we did. We arrived in Padron and in the church is a large sacred stone. It is said that the boat which had carried the body of James was moored to this stone. There is an amazing altar in this church in which many saints are honoured.

St Gertrude who was a German Benedictine nun, theologian and mystic. At age 4 she entered a monastery school where she received a thorough education and went on to have a series of visions. She is the patron saint of the West Indies. 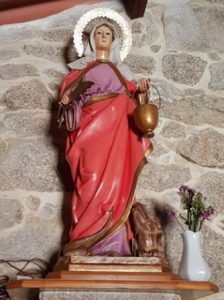 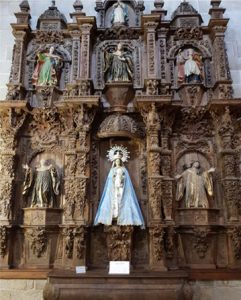 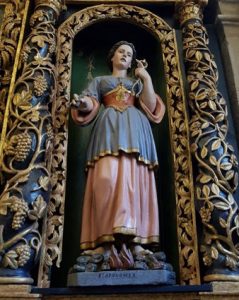 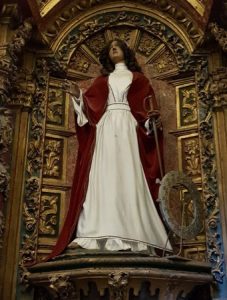 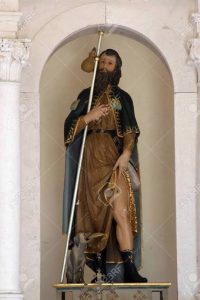 St Escolastica (480-543) was born in Italy of wealthy parents: her twin brother was St Benedict. She is the patron saint of nuns, education and convulsive children i.e. children who had epilepsy.

St Matilde of Hackeborn (1240- 1298) was a German Benedictine nun who became headmistress of the convent school and wrote many letters and prayers. She was also a gifted singer and trained the choir for much of her life.

Then at Pontavedra I came across St Appolonia – one of a group of young women martyrs who suffered during a local uprising against the Christians during the Roman rule. According to church tradition, her torture included having all her teeth violently pulled out or shattered. She is regarded as the patron saint of dentistry and those suffering from toothache. The statue depicts her carrying dentists’ tongs.

St Catherine of Alexandria (ca287–305) is the patron saint of many people including craftspeople who work with a wheel (potters, spinners) dying people, educators, girls, lawyers, librarians, mechanics, hat-makers, nurses, philosophers, preachers and scholars. As she was both a princess and a noted scholar who became a Christian at the age of 14, she converted hundreds of people to Christianity. She was martyred around the age of 18 by order from Emperor Maxentius. He ordered Catherine to be killed on a spiked breaking wheel, but at her touch, it shattered so instead he ordered her to be beheaded. It is said that angels transported her body to the highest mountain (now called Mount St Catherine) next to Mount Sinai. In the 6th century, the Eastern Emperor Justinian established what is now St Catherine’s Monastery in Egypt. The spinning firework, the Catherine wheel, is named after her.

Apart from James, one of the most important figures is St Roch, the patron saint of pilgrims. St Roch is the saint of cholera, epidemics, knee problems, plague and skin diseases. He’s also the patron saint of bachelors, diseased cattle, dogs, falsely accused people, invalids, Istanbul, surgeons, tile-makers, gravediggers and second-hand dealers. On the death of his parents in his twentieth year he distributed all his worldly goods among the poor in a similar way as Francis of Assisi. Coming to Italy, he tended many people who had the plague and miracles were reported. He himself finally became sick and withdrew to the forest and would have died but for a dog who licked his wounds and supplied him with bread. His statue shows him accompanied by a dog and lifting his tunic to reveal the sign of the plague on his thigh.

There are many more saints that can be encountered along the Camino routes. While their circumstances are different from ours and some of the realities of their lives may be lost in time, there are still similarities that I’ve been intrigued by. For me, discovering the stories of the saints is a way of looking beyond my own experience to connect with those who have travelled the Way before.