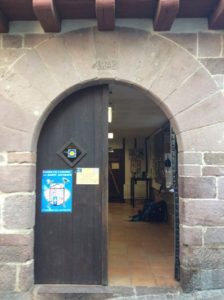 While volunteering in the Pilgrim Office in St Jean-Pied-de-Port (SJPDP), this was indeed a question from a woman who intended to walk 34 days, in autumn, across the Pyrenees, to Santiago de
Compostela.

In late 2018, I had applied for a position with Les Amis de Saint-Jacques as a hospitalera. Their reply advised that hospitalero positions for 2019 were filled but offered me a place for a week in the SJPDP Pilgrim Office in September. At the time I wondered why only one week when most hospitalero positions were for two. I was soon to find out why!

I arrived in SJPDP on Sunday 8 September 2019 ready to start my role at midday on the Monday. As I walked from the train station, up the narrow cobbled Rue de la Citadel, towards the Pilgrim Office I was immediately taken back to the excitement and anticipation I had felt when I had set off on my own Camino. I reached the terrace house of the Pilgrim Office joining the queue of pilgrims waiting patiently to enter the building. The excitement in the air was palpable as people talked about where they were from and their plans. Once inside, I introduced myself to one of the volunteers who welcomed me, explaining that I would be staying in one of the albergues the first night before moving into the Pilgrim Office accommodation and then taking me on a tour of the facilities. Downstairs, behind the office, was a large dining area and well equipped kitchen with access to an outside terrace, laundry and garden containing a huge tree, its canopy laden with figs. Upstairs were twin share bedrooms for the volunteers, bathrooms and administration office space.

The next morning I arrived at the Pilgrim Office and met my room-mate, Alexandra. I made up my bed and unpacked a few things. It was a comfortable room with plenty of space and a wardrobe for our clothes. At 11am we had a briefing where I met the other volunteers. There were to be five of us running the office for the week. Along with Alexandra, who was French/Polish and myself, Australian, were two French ladies who were old friends and lived nearby. They were to be a great help as they had volunteered many times at the office. The other volunteer was a French/Canadian man, an experienced pilgrim who had walked over 10,000 kilometres. Between us we covered English, French, German, Spanish and Polish languages. 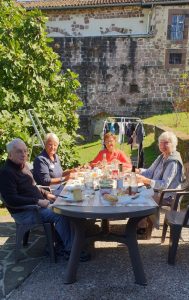 After the briefing, a special lunch was organised by Jean-Louis and Monique Aspirot from Les Amis de Saint-Jacques. This organisation is to be commended for their dedication, efficiency and all the work they do for the pilgrims. The lunch was both a farewell and thanks to the previous team and a welcome for us. The table was set under the fig tree in the garden and a typically French lunch was served with first course, second course (with meat and the obligatory sauce), salad, dessert, wine and coffee. I was not to know then that such a lunch was to be delivered to us every day by outside caterers.

The food I ate during that week was incredible. The menu differed each day often including a delicious soup and there were always enough leftovers for our evening meal. We also all chipped in to a kitty and with that we bought extra things such fruit, cheese, bread and a very special and tasty Basque drink, Patxaran, a liquor made from blackthorn or sloe berries. If that wasn’t enough food to keep us sustained, sometimes the French ladies would bake — one day we had marvellous crepes along with a fig compote, made with sun-ripened figs from the garden, another day we had the best ever apple tart. One evening the Hospitalero from a neighbouring albergue even bought us freshly roasted chicken and chips for our dinner.

And the work? After our welcome lunch the last week’s volunteers and the members of Les Amis de Saint-Jacques left and we opened the Pilgrim Office door ready for the afternoon and evening rush. Office hours were; 7.30am to midday and 1.30pm to 8.00pm and twice in the week, when a late train was due, we closed at 10.30pm. We never closed until we were sure all the pilgrims from the last train had secured accommodation for the night. At the end of that first day we were so busy I wondered how I would survive the week. We had a daily average of over 450 pilgrims come through the office. We spoke to each one giving them their credential and/or stamp, information on their first day’s walk plus elevation maps and pilgrim accommodation lists for the whole Camino. Pilgrims could buy a credencial for €2 and they could select a shell for a donation. The shells were from a scallop farm. In between seeing pilgrims, we made holes in the shells and threaded with string. We kept records of how many pilgrims we saw, their nationalities and how many credencials or other products we sold.

Some pilgrims were on their first Camino, nervous and apprehensive — these needed extra encouragement and help addressing their concerns… would they make it up the big hill to Roncevaux? All the volunteers in the office had walked the Camino Francés as well as other Caminos and were there to make sure pilgrims were greeted warmly and given enough information to ensure they had all they needed to set off for their own special Camino experience. Some pilgrims were finishing their Camino in SJPDP. They had walked from Tours, Le Puy or Vezelay and were there to get their final stamp and a well-deserved “Congratulations”. 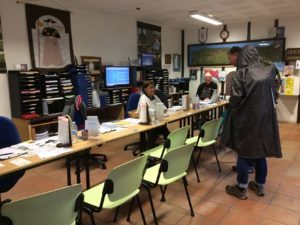 The quiet time in between trains

In the evening, after closing the office, we retired to the dining room for our dinner – plus a much deserved glass of wine, or more often of Patxaran. Our final chore was to tally up numbers of pilgrims and their various nationalities, count the money and balance the accounts. After that I would have a shower and fall into bed, sleeping like a log until the alarm at 6.00am. We shared the chores between us for organising lunch, setting the table, heating and serving the food and stacking the dishwasher. Sharing the early morning preparation of breakfast meant that every other morning we could sleep in an extra half-hour. A small but much appreciated rest. We also gave each other short breaks during the day, between the train and bus arrivals, for personal chores; laundry or shopping or to just take a walk around the town’s ramparts, along the river or wander around the shops full of tasty local produce; cheeses, specialty hams, sausages and a variety of Basque cakes.

A pity that so many pilgrims arrived and set off without exploring this lovely Basque town.

As the days progressed, I became more comfortable in the role but the work was intense physically as well as mentally. One week was really all you could manage. Some of the pilgrim’s stories were very moving. Some a celebration, friends walking together or, in one case, a family of three generations, mother, daughter and granddaughter. Others were heart-rendering. One lady was carrying her mother’s ashes; another was recovering from a long illness and was walking to recover her strength with instructions from her doctor to take it slowly. A man was walking in his grandfather’s footsteps, following the details in his grandfather’s journal written after surviving the horrors of a concentration camp after WWII, when he then walked from Germany to Santiago de Compostela and on to see the ocean at Finisterre. Another man was suffering greatly after working as a psychologist helping returned soldiers from war zones. We all hoped and prayed that these people would find resolution and peace from their Camino.

The Camino is indeed a very special experience for all who undertake this journey. It was a privilege to have met so many pilgrims over the week. So much so that I signed up to do the same thing the following year and my fellow volunteer, Alexandra, and I will work again together.

I would certainly encourage others who have walked the Camino Francés to consider a volunteering role in the Pilgrim Office in SJPDP. You would need to speak some French and any other language would be a plus – especially Korean as many South Korean’s are now walking the Camino Francés. Be prepared for full-on busy days but so very rewarding. 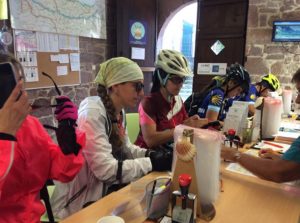 Spanish cycling group of pilgrims get their credencials stamped

Queue of pilgrims from the afternoon train

The pretty village of Saint-Jean-Pied-de-Port 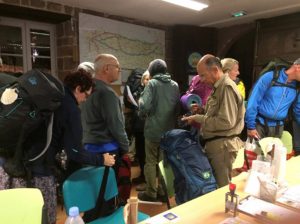 Busy evening in the Pilgrim Office
Australian Friends of the Camino