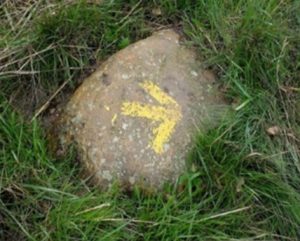 Since the Middle Ages pilgrims have walked to Santiago de Compostela to honour the apostle Saint James and to gain spiritual indulgences. Originally, they started from their own front door, following in the footsteps of previous walkers. Due to the lack of signage along the way they often sought out other pilgrims, and walked in groups to support each other, and for safety from roaming bandits. It was a dangerous undertaking – many pilgrims become lost or were attacked and robbed, and many died before reaching the tomb of Saint James.

As the pilgrimage route became more popular, some markers began to appear along the way including crosses and mounds of stones. These were useful in the warmer seasons but during winter many were covered by snow.

The distinctive yellow arrows that are now so common on the Camino are a comparatively recent symbol introduced in the 1980s by Don Elías Valiña, the parish priest of O Cebreiro. He was one of the most important figures in the revival of the modern pilgrimage, and also put the mountain town of O Cebreiro back on the map as one of the great landmarks of the French route. Originally from Sarria, Don Elías settled in O Cebreiro as a priest, and was passionate about the history of the Camino. His doctoral thesis completed in 1962 was entitled “The Way of Santiago: a historical-juridical study “.

In 1984, he began what became a lifelong commitment to identify the original sections of the pilgrimage route, much of which had become lost or impassable, and to waymark the trail all the way between Roncesvalles and Santiago de Compostela. Working closely with local parishes and mayors, and encouraging support from various associations of Friends of the Way, he started marking the original Camino route in the vicinity of O Cebreiro, pointing the direction to Santiago with simple yellow arrows painted on walls, rocks, trees or even on the pathway itself. 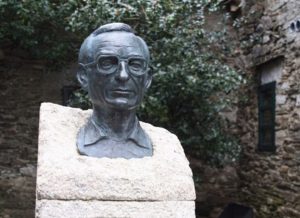 Local folklore says that Don Elías started painting the yellow arrows using leftover paint given to him by workers signposting roads in the O Cebrerio area. However José Manuel López Valiña, a descendant of the parish priest, believes the choice of the yellow colour was not entirely by chance. According to José: “In his first outings to explore the terrain and signpost the Route, my uncle realised that it was necessary to use something for attracting a lot of attention and which would last for a lifetime. When he arrived in France, he saw that yellow was the colour used to signpost mountain routes, so he decided to paint the Camino de Santiago route in that colour”.

Supposedly when Don Elías finished in the Galicia region, he still had a lot of paint left so he continued with the same colour painting arrows along the entire Camino Francés route. Some say he drove across northern Spain in his Citroën 2CV packed with yellow paint, adding arrows at all the tricky crossroads.

To ensure the continuity of his work he initiated the development of regional groups and associations to maintain the signage within each section of the Camino. He also travelled to many European universities and conferences promoting the importance of the Camino de Santiago. 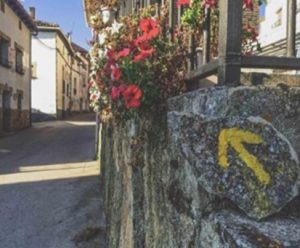 Today Don Elias’ simple yellow arrows are the most recognisable and distinctive symbol used on all Camino routes. Don Elias’ contributions to the Camino were formally acknowledged when he was named ‘Commissar of the Way of Saint James’ for the I Encuentro Xacobeo held in Compostela in 1985. In addition to his work way-marking along the Camino route Don Elias also played a significant part in the restoration of the village of O Cebreiro, leading to the opening of the Ethnographic Museum there in 1971.

In his last will, Don Elias asked his family to ensure that the use of yellow arrows on the Way was not lost, a request which his descendants continue to carry out with the help of associations of Friends of the Way of Saint James.

There is an amusing anecdote told about Don Elías when he was way-marking in the Pyrenees – when stopped by the Civil Guards with a can of yellow paint in his hand while drawing yellow arrows along a pathway, they asked him what he was doing so close to the French border. He replied, “Preparing for a great invasion”.

Don Elías died in 1989, so he did not get to see his vision for an ‘invasion’ fully accomplished, but he would have been pleased to see the thousands of pilgrims of all ages and nationalities following his yellow arrows to Santiago every year.

NOTE – From 2021 the scallop shell and the yellow arrow will be the only two official symbols of the various Camino pilgrimage routes – the scallop shell to signpost that the pilgrim is on a Camino pilgrimage route, and the yellow arrow to signpost the direction to Santiago. This follows a decision by the Jacobean Council (Consejo Jacobeo) which met in León as part of the 2021 Holy Year preparations.