Having now arrived in Santiago de Compostela on four occasions and walked in excess of 3,000 kilometres in Spain and Portugal, I have seen endless flora and encountered a reasonable variety of fauna. 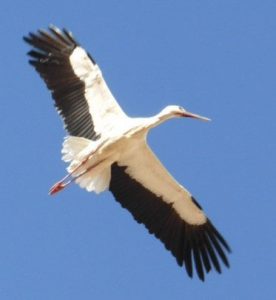 Commencing with the Camino Francés in 2013, l was initially fascinated by the nesting storks and constant call of the cuckoo. While storks are easy to see, the cuckoo is somewhat reclusive and was only properly viewed and identified on one occasion. Storks do not appear to like the coast and the last one encountered on the Frances was just east of Sarria.

During our walk we developed a rating system for towns and villages on the Francés based on the number of nesting storks. A 5-stork village has to be better than a village with only two storks!

Apart from birds and domesticated animals (cattle, sheep, goats, horses and donkeys) there was very little other wildlife seen on the Francés. Perhaps this situation is due to the large number of walkers on this route. The exception was a very agile Montpellier snake that was encountered in one of the sunken lanes in Galicia. It climbed the steep bank and disappeared before I could get my camera out to photograph it.

Donkeys seem to be everywhere in Spain though not often seen working although we did see one on the Francés carrying a load of firewood. I have been told that the EU provides subsidies for farmers who keep donkeys, which is probably why you encounter them in fields and rarely working.

As for flora, I love European trees, oaks, elms, beeches etc. and was very disappointed at encountering large numbers of eucalypts in Galicia. Australian native trees in Spain were not on my agenda and probably the most disappointing aspect of my walks.

My second Camino in 2014 was from Granada to Santiago, via the Mozarabé, Via de la Plata and the Francés from Astorga. On this Camino we encountered a greater variety of wildlife.

Wildlife included the usual storks from Castro del Rio, cuckoos, hoopoes, hares and deer. The hoopoe is a spectacular bird and we were able to obtain some great photographs as it danced along fence posts in front of us as we walked.

Other animal encounters included an attacking large white rat that made my brother Phil jump out of its way and an exceptionally large cockroach that forced Bob, Phil and myself out of a bar in Merida.

Walking from Granada to Merida, you encounter nearly 400 continuous kilometres of olive trees. There might be some exaggerating here, but the olive trees and the sound of chain saws (pruning time) are indelibly imprinted in my memory. 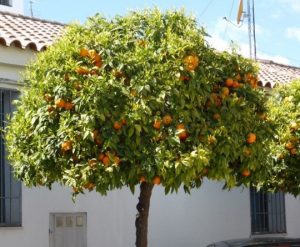 In late March, the ornamental orange trees in Granada and towns along the Camino are spectacular although not for eating. Bob and Phil acquired oranges from a tree near the Cathedral in Granada and found them to be too bitter. I guess that stolen fruit is not as sweet as the proverb would have us believe. Later on we witnessed oranges being cleaned up with a front end loader and carted away in a garbage truck.

North of Merida on the Via de la Plata, the large vegetation consisted of holm (holly) oaks and cork oaks. Both are beautiful trees and are evergreen oaks. The acorns from the holm oaks are used to feed the pigs that produce the famous Spanish cured hams. Apparently the requirements for top quality ham are  black pigs that put on at least 50% of their body weight eating acorns (don’t quote me on this as I have not validated the statement).

There were masses of wildflowers along various sections of the Camino, although apart from wild lavender, I had no idea what species I was looking at.

To date, I have not mentioned dogs. Dogs on the Francés are in the most part non-threatening and have probably become accustomed to the thousands of pilgrims walking past their place of residence. This is not the case on the Mozárabe and Via de la Plata. The dogs are frequent, massive (at least twice the size of dogs in Australia), and delight in scaring weary pilgrims. Thank goodness for collars and strong chains. Also l found out that dogs do not like to be photographed. Pointing a camera at one is a guarantee to test the breaking strain of the chain/collar combination.

On the odd occasion when we came across a dog that was not tied up, we found that in most cases that they tended to stay clear of us. Perhaps it was the frantic waving of poles that gave it the message we were not intending to be easy targets. 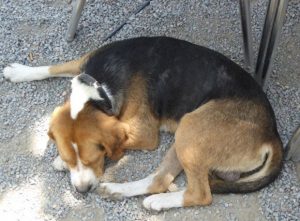 Not all dogs spend their time barking and scaring pilgrims. We saw one dog that had developed climbing skills and was surveying his kingdom from the roof of the establishment where he lived. It is not often that you see a dog walking to and fro along the ridge of a house roof.

2015 saw me in Porto walking to Santiago with my son Paul. Not a lot of wildlife was seen on this walk. A cuckoo was heard on only a couple of occasions and there were no storks on the west coast of the Iberian Peninsula.

We did see the Barcelos cock, although it was made out of fibreglass and somewhat larger and more colourful than the usual birds seen in Portugal and Spain (this one was of the flightless variety).

The only real wildlife seen were two snakes, one on the side of path hidden under leaf matter staying perfectly still while being photographed. You have to wonder how many pilgrims walked past this snake without realising that it was there.

Dogs were not an issue on this Camino and in fact one very friendly dog walked with us 18.5km from Caldas de Reis to Padron. Although we attempted to chase him away on several occasions, he kept returning. We last saw him sitting under a table at a Padron bar. He obviously knew the route as on occasion he would lead the way rather than follow.

When it comes to flora, the Camino Portugués was again a complete disappointment. It was eucalyptus trees almost continuously from Porto to Santiago (where is a good bush fire when you need one!). There were places where European trees grew, but only in small sections when compared with the eucalyptus plantings.

In 2016 I walked the Camino del Norte from Irun to Santiago. Similar to the Portugués, not a lot of wildlife was sighted although I did come across two donkeys earning their keep.

Only a couple of cuckoos were heard and only two nesting storks were seen in the vicinity of Vilalba (once we were well away from the coast). We did see gryphon vultures between Islares and Laredo which were spectacular and a single red squirrel. Most probably the higher population densities near the coast have resulted in lesser fauna numbers.

Again, the north coast is inundated with eucalyptus trees, which was similarly disappointing.

In summary, walking in Spain for me is the wildlife. I love the storks, hearing cuckoos, seeing working donkeys and having been given an opportunity to see snakes, hoopoes and gryphon vultures. For trees, nothing is nicer than the holm oak, cork oak or an ancient olive tree. What I don’t like are the eucalyptus trees and 400km of wall to wall olive trees can become a bit mind-numbing. 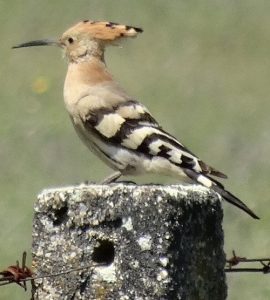 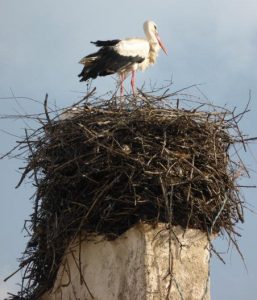 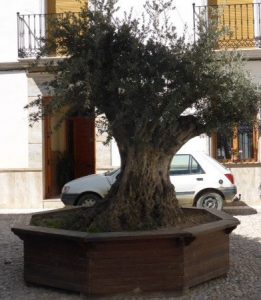 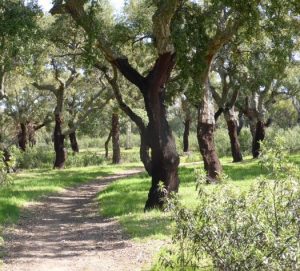 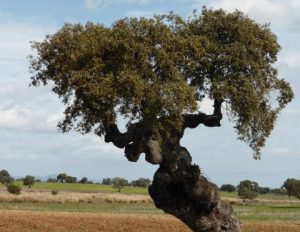 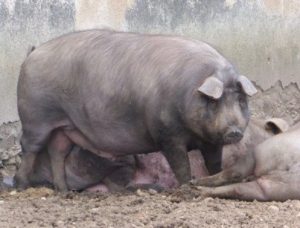 The pigs that produce the famous Spanish cured hams. Apparently the requirements for top quality ham are black pigs that put on at least 50% of their body weight eating acorns (don’t quote me on this as I have not validated the statement). 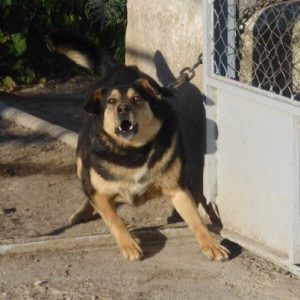 The dogs are frequent, massive (at least twice the size of dogs in Australia), and delight in scaring weary pilgrims 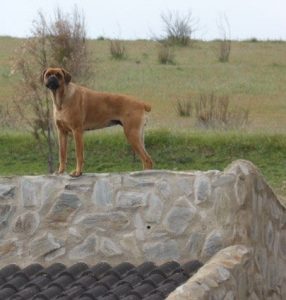 We saw one dog that had developed climbing skills and was surveying his kingdom from the roof of the establishment where he lived. It is not often that you see a dog walking to and fro along the ridge of a house roof 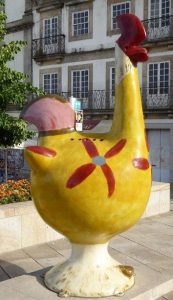 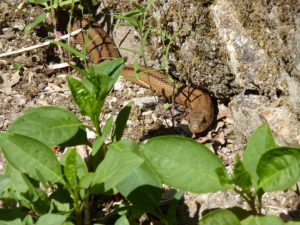 The only real wildlife seen were two snakes, one on the side of path hidden under leaf matter staying perfectly still while being photographed 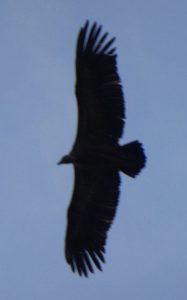