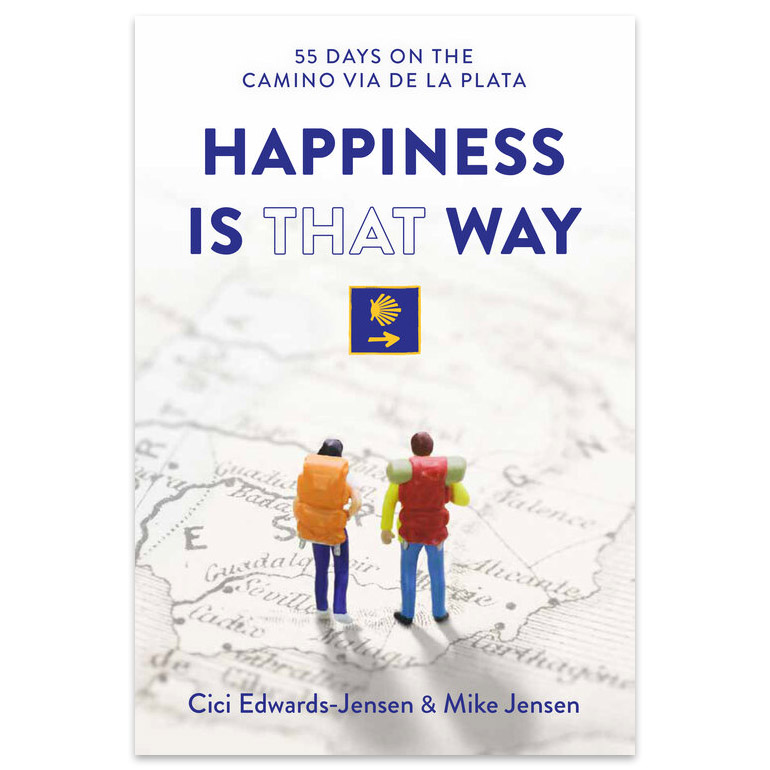 Cici was introduced to the Camino by Tony Kevin’s book, Walk- ing the Camino, which describes his Camino starting in Granada. She had worked at the St John of God Rehabilitation Hospital in Melbourne as a pastoral carer and was attracted to starting a spiritual pilgrimage from Granada, where John of God commenced his ministry to the sick and poor in the 16thC. Mike, her husband, was unsure about his reasons for walking but look- ing forward to an adventure and a change from corporate life.

in Granada. By that time they had decided that they were not fit enough to tackle the 1260km Camino. They planned to walk from Sevilla on the Via de la Plata (VdP), north past Mérida, Salamanca and Zamora, then branch west on the Camino Sanabrés through Oviedo to Santia- go de Compostela. A journey of about 1000km.

The authors say that Happiness is That Way was written as “a memoir of our impressions, thoughts and feelings of the Camino Via de la Plata”. They explain it is not intended as a guide book, nor does it record all villages, distances or descriptions of terrain. They started from Sevilla in late September 2016 and were immediately beset by challenges that many novice pilgrims face, including heavy packs, getting lost in a strange, pre-dawn city and hot weather (with maximum temperatures in the 30’s °C for more than a month). As the Camino continued, both were affected by physical problems that required medical attention and changes to plans.

They met and formed lasting friendships and were also helped by Spanish pilgrims and hospi- taleros. However, both at times had doubts about their ability to complete the journey. In Rionegro del Puente, Cici was introduced to the concept of ‘tu camino’ (your way) meaning that there is no one correct way to complete a Camino. If you feel that it is right for you to take a bus for part of the way, or skip a stage, she was told, “Whatever way you do it, if you do it wholeheartedly, it is true for you”. [Note: If you wish to receive a compostella when you arrive in Santiago you still need to follow their requirements for the last 100 or 200km.]

I must disclose that I have, with my wife, walked to Santiago from Granada, via the Caminos Mozarabe, VdP and Sanabrés in the autumn of 2013. We also had similar temperatures as far north as Salamanca. We also experienced the same Galician rain as we travelled further north. Cici and Mike stayed in many of the same towns, albergues and hostals as us. Their descriptions are, as I recall, accurate.

Despite their difficulties they returned to Spain in the Spring of 2019 to walk from Granada to Cáceres and then from Ourense to complete the Camino. This time they walked into Santiago de Compostella on a sunny day and saw the Cathedral spires from the Rua de Sar, 2km away.

Happiness is That Way is well written and very readable. Cici and Mike take turns in narrat- ing the story. Sometimes describing the same events from their personal perspective and sometimes continuing the narrative. The book includes plenty of photographs. It will be of interest to those who are interested in walking the VdP and will rekindle memories in those who have taken that route.

It is printed in Australia on good quality paper and costs $32.95 plus postage ($10 in Australia). Order a copy via www.happinessisthatway.shop.