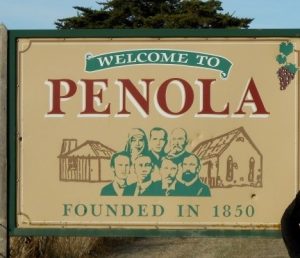 The Aussie Camino is a pilgrimage path from Portland in Victoria to Penola in South Australia, inspired by the life and journeys of Australia’s Saint Mary of the Cross MacKillop and her mentor Fr Julian Tenison-Woods. Although the Camino is designed to be self-guided, groups of around 15-20 depart at various times of the year. Maps, information and booking details can be found at www.aussiecamino.org

People today, young and old, are travellers. Globe-trotters, jet-setters, holiday- makers and workers for multi-national companies are part of today’s world. But journeys for religious and spiritual purposes – or pilgrimages – have been under- taken for thousands of years. A pilgrimage is different from all other types of travel. Its purpose is to visit holy or sacred places associated with a saint, where people can feel near to the saint through relics or miraculous stories.

Australia has no history of pilgrimage, at least in the Christian sense. There are, of course, many Aboriginal sacred sites and the indigenous people of this country have visited them for millennia, but there is no tradition of Christian pilgrimage in Australia as there is in countries such as Spain, France, Italy and the Holy Land. For pilgrimage to become part of the Church’s witness in a particular country, one needs saints and a desire to visit places associated with their lives. According to the Oxford Dictionary, there are two related meanings of ‘pilgrim’: ‘one who travels to a sacred place as an act of religious devotion’, and also       ‘a   person   who   regards   life   as   a   journey’.   With   the   canonisation     of  Mary  MacKillop  in  2008,  the  tradition  of   pilgrimage   has   begun   to take root in Christian consciousness in Australia. 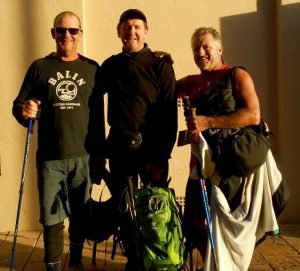 Mary MacKillop was a traveller. Her work took her all over Australia and New Zealand. Almost a hundred years before Vatican II, in 1867, Mary urged her Sisters: “Remember we are but travellers here” – although she did not mean that they were to be travellers in the sense of packing their bags and moving on. These words have been inscribed on her tomb in the Mary MacKillop Memorial chapel in Sydney. They are a reminder to us all of the reality that we are pilgrims, only passing through this world where we do not belong. Obviously, the image of life as a journey, where there is no permanence and where there is need for endurance, was very meaningful to Mary MacKillop.

The Development of the Aussie Camino

In April 2013 Luke Mills, Steven Murphy and Michael Dillon from St Francis Xavier College set out to walk from Portland in Victoria to Penola in SA where the Mary MacKillop story began. As far as is known, this was the first time this pilgrimage had been undertaken.

After seeing the movie The Way, Luke, Steven and Michael began discussing the concept of pilgrimage, and asked one another “Why are there only Caminos in Europe and the Holy Land? Why can’t we have one here now we have a saint of our own?”

Steven and Luke began the task of planning a Camino that would be challenging but achievable. It seemed important to determine an appropriate commencement point. Although Mary travelled widely, her last teaching post as a lay teacher was in Portland. From here she was called by her mentor and co- founder, priest Fr. Julian Tenison-Woods, back to Penola where they had first met a few years before. So Portland was the obvious choice for the starting point. And as Penola is the birthplace of her order, the Sisters of St Joseph, Penola has become the shrine, or destination, for pilgrims on the Aussie Camino.

It was on 19 March 1866 in Penola that Mary wore her black habit for the first time and declared herself Sister Mary. Mary’s actual path from Portland to Penola is not recorded, but she would almost certainly have passed through many of the same towns as the Aussie Camino does today. In developing the Camino, Luke and Steven planned each day with an average of 30km to walk.

Penola is a small town with a population of only 1300. It is 383km from Adelaide and 412km from Melbourne and, although it has been made famous for its wine growing and its association with Mary MacKillop, many Australians would not have visited it since it is not on the main highway between the two large cities. 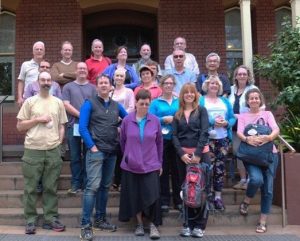 “We wanted to make this Australian pilgrimage journey like the Camino in Spain with a guide book and a passport for each stop.” said Luke. “Unfortunately we couldn’t have passports because there would be no one to stamp them. However we made up a guide book of all the maps which included a reflection for each day.” Another important part of the Camino was to ‘bookend’ it by visiting the Mary MacKillop Museums in Penola and in Melbourne.  “This provided a certain structure which we wanted to achieve,” Luke recounts.

With maps in hand, we set out for our destination each day which would include eight hours of walking. Every day began with a lively “Buen Camino!” in the main street of each town. The days were long but spectacular as  it was planned to be both a spiritual and religious experience. It was important to have a Camino that recorded the places of Mary MacKillop but also appealed to people who have a sense of awe in creation. This was certainly the case as this Camino includes walks along cliff tops, beaches, sand dunes, goat trails and farm tracks. Only about 10km of our whole Camino was on major highways”.

“I wanted to stay in the local pub in each town and meet the local people”  says Luke. “At the front bar of every small hotel in the country you are likely  to meet very colourful characters who are only too happy to share their stories. This was certainly the case and whenever anyone asked if we were walkers, we said, “No, we’re pilgrims. We are on a Camino.” Needless to say we were met with curious looks but also some humour and good spirit. We were able to enter into a lively discussion about what our journey was all about. “I don’t think there would be many front bars in Australia that would be discussing Mary MacKillop, so it was certainly a moment of revelation for many of the local people along the way.” 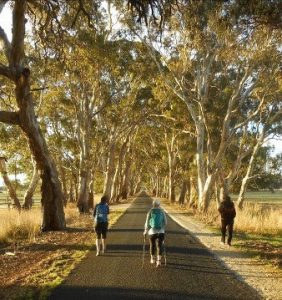 On the trail near Kalangadoo

Luke goes on to say, “This was a terrific week. The three of us got on well and although we were tired at the end of each day, with a shower, a hot meal and a good sleep, we were ready for the next day. The peace and solitude combined with the steady rhythm of the feet and walking poles provided many moments of reflection. In this busy life often we don’t get a chance to really talk with one another, but after spending 8 hours on the road together we were able to share very personal experiences of each others’ lives.

After 200km and 8 days of walking, the three weary pilgrims were met by the director of the Mary MacKillop Museum, Clare Larkin. “We delayed a tour of  the Centre until the  next  day as we were concerned about the smell of our pilgrims’ clothes which had been worn every day. We convened for dinner with other members of the Penola com- munity, all of whom were interested to hear our story. Where else but at the local pub? This time we could claim the Royal Oak Hotel does have significance since it was once owned by Mary MacKillop’s uncle.”

Since 2013 over 300 registered pilgrims from all over Australia have completed the Aussie Camino. It has proven to be a most popular journey that is gaining recognition not only in the local region but around the world. Some traditions of the ancient Caminos have now been added including the pilgrim passport (credencial) which is stamped by the local pubs, as well as the scallop shell and certificate issued on completion.

I have received enquiries from Canada and Argentina. What I have realised since doing this is that there are some serious Camino junkies out there, addicted to the Camino-style pilgrimage. Many have walked El Camino de Santiago as well as other ancient pilgrimage routes. It’s a beautiful way of sharing time together, one that allows personal reflection as well as sharing the warmth and friendship of others.

For more information please visit www.aussiecamino.org or contact me at: lukej.mills@bigpond.com 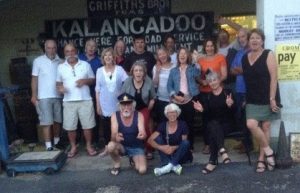 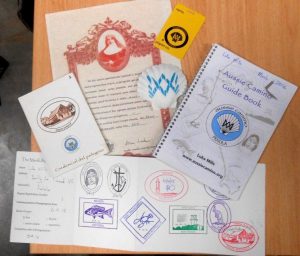 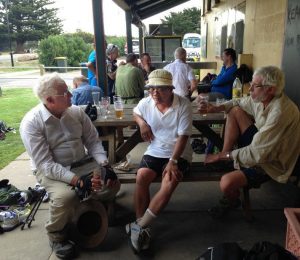 Walkers recovering from the day’s walk at the Nelson Hotel, December 2014
Australian Friends of the Camino