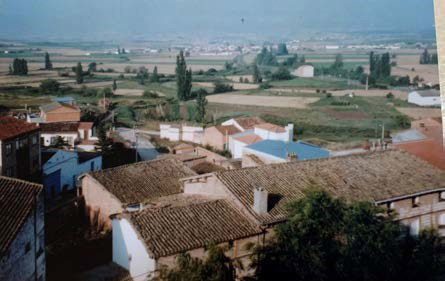 Azofra – panorama, with the towns of Alesaner and Canar on horizon

On the Camino Francés, every town has its tale. Often uneventful, but usually memorable – if you’re paying attention. And it’s easier to pay attention if you do the pilgrimage alone as I did. Except for the initial 26k slog across the Pyrenees when I was joined by two English professionals whom many had sponsored at £1–a day for charity and the stage from Uterga where I was accompanied by a friendly, apparently homeless, dog. He was rewarded with a feed on our arrival in Muruzabal and, for all I know, makes his living doing that.

Now imagine, all you young’uns, what the Camino was like a quarter century ago. Back when it was more a pilgrimage route than a walking holiday. Back when you didn’t detour into a nearby town to recharge your smartphone. Because there were no smartphones. Nor GPS, come to that. Back when you didn’t make reservations for the albergues and it was first-come-first-serve and the bicycle pilgrims – peregrinas descafinados – got the best bunks and staying at a hotel was pretty much out of the question. Back when the Refuge Orisson didn’t exist, and you either made it all the way to Roncesvalles in one hit or called it quits. Back when travel agents weren’t selling Camino Tours. Back when… you get the idea.

July 9 1997 and a stinking hot day. I staggered into Azofra, twixt Nájera and Santo Domingo, exhausted. An inquisitive woman seated in what passed for the Plaza Mayor asked, “Are you looking for the albergue?” I, completely knackered and sweating like the proverbial pig, was going to reply “A-duh!” but I didn’t know how to say A-duh in Spanish. She went on, “Well, I’m the hospitalera and I’ll take you to it”.

Turns out it was a recently refurbished 20-bed affair, with communal sink and working toilets. Now, I acquired the daily habit, way back in Larrosoa?a, of dining on a baguette, can of anchoa-stuffed olives and a brick of low-octane 100-peseta wine, lashing out on the occasional piece of cheese. Just as I start to relax in my bunk, the hospitalera rocks up to sell me a bottle of “special Rioja” from her very own vineyard. I’d already drunk my brick but, well, how could I refuse? This was in La Rioja, where Rioja is made, and insulting her by declining just  wouldn’t  do.  Plus,   every  kilo  counts,  when  you have blisters, and I didn’t want to add a bottle to my burden. The bottom line is that I went through two servings of the stuff by later that evening.

Thoroughly zonked out, I wandered over to the empty Romanesque chapel adjacent to the albergue, and found therein… a reed organ. Not just any old harmonium, but a 14-stop antique affair with healthy bellows. I couldn’t resist and sat down to play. Some was old stuff I’d composed years before; others, quite beautiful, just came to me out of the cosmos. The medieval barrel vault of the chapel augmented my chords to the heavens. Fortissimo! Imagine the sense of power! The hospitalera – who also happened to be the church’s sancristana – heard the music, came in, and flatteringly, sat on a pew for a long time just listening.

But it wasn’t over yet. Somewhere along the line, I was possessed to re-enter the place and set 40 votive candles alight, for which, it must be said, I did contribute the requisite ten pesetas each to the collection tin. Such candles, I think, are often lit for reflection upon departed loved ones. So when she wandered in again and saw two dozen of the things ablaze, she must have thought a bus had crashed or something.

Understandably, I don’t remember much else that happened that night, if anything. But the considerate hospitalera did break with protocol and found me a private quiet lightless room, with no Spaniards getting up and singing before dawn, where I could sleep it off.

The next day she escorted me up through the tower of the church, a very narrow passage (people were smaller when it was built), avoiding the guano and dead pigeons, into the belfry where I was afforded a panorama of the town. Additionally, she gave me a bronze commemorative coin describing the ancient stone Cruceiro north of Azofra – significant to the Pilgrimage, but I’ve forgotten the details. Some years ago I gave it away to someone else. Which I now regret, although collecting too many material ‘treasures’ can detract from the real treasures. And she permitted me to stay another night.

Her name was María Tobía Martínez. She was a good hospitalera.