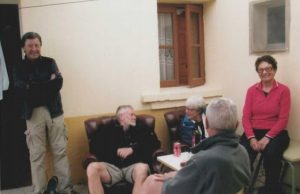 The usual united nations of an evening on the Via de la Plata [Left to right] Mateo from Holland, Wolfgang from Germany, Edith from Switzerland, Jean-Luc from France, Ilse from Germany.
When I walked the Via de la Plata in 2011, I walked the last 2 weeks in company with Ilsa from Germany, Wolfgang also from Germany, and Mateo from Holland. It was a joyous time. We just gelled together as friends on the Camino so often do. Ilsa was well into her 70’s and although she was a little slow going up the hills, she was like a rocket going down, and she became our proxy grandmother. Wolfgang was a professional photographer who because he was on holidays refused to take a camera with him. Mateo was a 5 times author of books on mental health, who frequently travelled to lecture on issues raised in his books. His fluency in 5 languages enabled him to do this in many countries.

Wolfgang left us immediately when we arrived in Santiago de Compostela to take up a photography assignment in Portugal, but Ilsa, Mateo and I shared one last dinner together in Restaurante Tarara. We were in high spirits, pleased that each of us had been able to walk all the way from Sevilla, and there was much laughter and general merriment. There was a table of two people beside ours, and after a while they introduced themselves to us as an American couple who were touring Spain. They apologised for interrupting, but they heard us speaking English and said that they had been in Spain for 3 weeks without hearing anything other than Spanish, and were pining for someone to speak English too. We promptly invited them to share our table which they did. 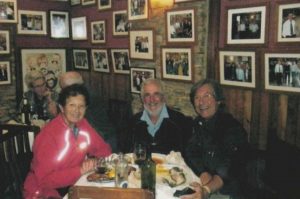 The evening dinner at Tarara, with Ilse, Alan, and Mateo. At the table behind us are the American couple who were shortly to join us.

After some small chat they asked us how we had arrived in Compostela – had we come by air, by train, or by hire car as they had. We told them we had walked. “That’s nice” they said, “We like walking too, sometimes we even walk 5 miles. Where did you begin your walk?”. When we told them that we had begun from Sevilla they looked at us in frank disbelief. “But we were there last week, and it is a long way away.” We told them it was actually 1000km. It turned out that although they were in Compostela they had never heard of the Camino. We explained what it was, and that the Via de la Plata was one of the Camino routes. “But how can you walk so far, do you not get tired, or wet, or bored? And if not why not?” We just don’t, we replied, we just keep going, it is what happens on the Camino.

A little later they remarked on how fond we were of each other, and that we must have known each other a long time. We answered that we had only met 14 days before. Again that look of disbelief. “But how can people who had never met each other become such close friends in such a short time?” They were still processing the fact that people could walk 1000km and actually enjoy it, and this new facet added to their confusion. We looked at each other with broad smiles, and told them that it is what happens on the Camino. 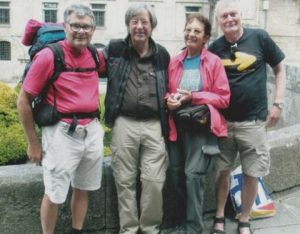 The day we arrived in SdC: Mateo, Ilse and Wolfgang. Jean-Luc (left) from France impressed us by walking from Sevilla in socks and sandals.

Then they asked us when we would meet again, as our fondness for each other was so evident. We told them that this meal was probably the last time that we would ever see each other, as we had to go our separate ways back to our own countries and resume our lives back with our families. “But don’t you feel great sadness that you will not be able to see each other again?” We explained that although of course we lamented the fact that we may not meet again, much greater was our thankfulness that we had been lucky enough to meet in the first place. It’s what happens…..

“I know, I know,” they chorused “Its what happens on the Camino!”

PS I never met Ilsa again but we kept in touch for some years The next year my brave little grandmother walked the Francigena!

I actually saw Mateo twice more in SdC. Completely by accident we bumped into each other in the Pilgrim Office 2 years later, and again two years after that. We shared some joyous wines together.