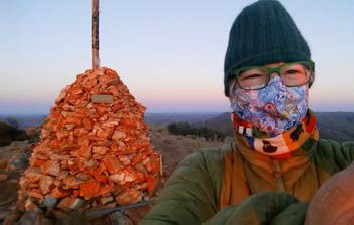 Sunrise on Brinkley Bluff wearing my Camino mask as a face warmer, August 2021

Turning 60 in August, I wanted to challenge myself with a 19-day solo hike on the Larapinta Trail. I chose this because my husband and I had done it before in 2019 so I knew what I was in for and for the likelihood of others being on the track with company at the campsites. Unfortunately, my daughter’s cardio-thoracic surgery was postponed and rescheduled for the first week of my hike. Luckily her recovery went well and, hoping to make the most of the last week of my holiday, I quickly organised flights, border passes, accommodation, dehydrated some left-over meals and threw my things into my pack. 36 hrs later I was bound for Alice Springs for a short four-day hike.

As I had had little to no preparation, I had planned short stages from Alice Springs finishing at Stanley Chasm: however this changed when I caught up with a young colleague from work who had also planned to hike the trail solo but pulled out halfway thru her first day, daunted by the prospect of being on her own. She was keen to hike up Brinkley Bluff for an overnight camp so we arranged to meet at Stanley Chasm in a few days. As I had hiked this trail previously with no problems, I thought a four-day hike would be a breeze. Unfortunately, this time I ended up with 5 large blisters and several smaller ones, a black toe nail and ended up losing another, and debilitating pain in the side of my right knee and groin making progress over the challenging terrain into Stanley Chasm very slow! I had chosen to wear hiking shoes (instead of my usual hiking boots) that had been perfectly comfortable on day hikes but had never worn them with a loaded pack, plus walked double the distance of 2019 on my first day (27km) to meet up with Ana – in hindsight ,definitely a recipe for disaster and a lesson learnt for my re- scheduled solo thru hike next year. 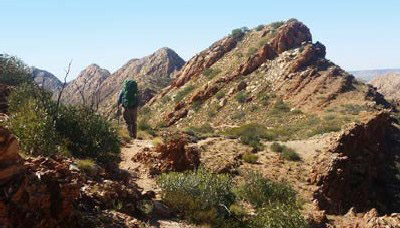 Feeling better after a night’s rest (aided by ‘Camino lollies’ ie Ibuprofen) at Stanley Chasm and with blisters patched, the hike up to Brinkley Bluff was uneventful and we enjoyed the bright sunny day and epic views of the West MacDonnell Ranges, probably taking out the dubious award for the longest time to reach the cairn at the top! But why hurry when we had all day ending with the sun setting over the ranges while enjoying wine and cake that Ana had carried up for a belated birthday celebration. Getting up for the sunrise the next morning in the near zero-degree temperature, my Camino face mask from Ivar’s store came in handy as a face warmer!

In June 2019 Kevin and I had hiked the 238km Larapinta Trail over 19 days, walking east to west from Alice Springs to Mt Sonder, NT’s second highest peak. The trail can be walked in either direction requiring either a drop off or pick up at Redbank Gorge at the western end. The trail traverses rugged ridges of the West MacDonnell Ranges with steep climbs and descents, passing through ancient gorges with massive boulders and dry waterfalls to be negotiated, sandy river beds and undulating plains. The views are wide and epic and leave you in wonder of this ancient land. While we walked modest stages of 7-16km/day at a leisurely pace, leaving time to enjoy side trips to gorges or relax and chat to our fellow hikers, the hike can be done in as little as 12 days or less. Most overnight camps had a 3-sided shelter, toilet and a water tank monitored and topped up by the rangers. To break up several long days we had 3 ‘dry’ camps with no facilities, requiring a water carry of approximately 6L adding an extra 3kg to our usual pack weight (we usually each carried 3L of water) bringing our total pack weight up to about 15–16kg. We chose to hike independently, arranging our own food drops at the designated drops at Stanley Chasm Kiosk, Ellery Creek and Ormiston Gorge, as we had driven up to the NT from Adelaide in our own vehicle arranging a key to the store rooms with the Alice Springs Information Centre. Most people flying in arrange their food drops, key and pickup/drop off with a trek support company. The hike can also be done with a tour company – either as a through hike or day walks of the highlights. 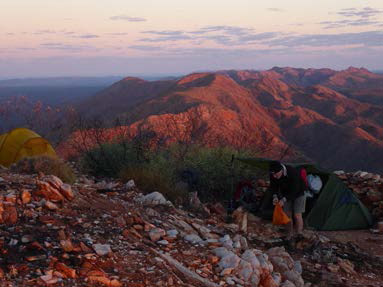 We used John and Monica Chapman’s ‘Larapinta Trail’ guide book – last printed in 2015. It had some trail distance inconsistencies where the trail had been realigned. Mulga Camp had been relocated a few km further on leading us to think we had missed it! Map packages are also available from the NT Parks and Wildlife Commission. Trail signage was good – we only went ‘bush’ once after missing a sign to exit a creek between Mulga camp and Jay Creek. Going through the gorges was mostly a find-your-own adventure – with the huge red rock walls you could hardly go anywhere else! A little challenging in places – boulder-scrambling and negotiating the rock wall of a dry waterfall.

January 2019 had seen large bushfires sweep through the West MacDonnell Ranges devastating the natural bush – the Friends of the Larapinta Trail had worked tireless- ly to clear the trail and replace signage in time for the 2019 walking season. A lot of the trail was blackened, some areas resembling ground zero, some showing shoots of life returning and a few protected gorges still supporting ancient cycads, native pine and mallee. It had its own stark beauty with the trail visible far ahead winding its way through the blackened landscape. On my return this year, some parts were unrecognisable with the amount of grasses and spinifex covering the once bare land, wild flowers blooming in the late spring. Hikers I met coming the other way reported large flocks of budgerigars swooping down to the water at the waterholes, absent after the fires due to the lack of feed. 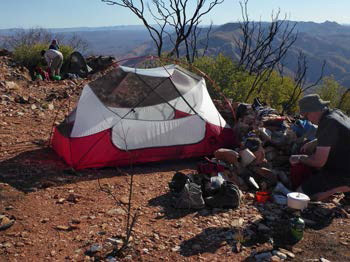 One of the passes

The first day of our hike – 11 June 2019 – was about 30 degrees. We had spent the night before at Glen Helen – about 130km from Alice Springs – where we had arranged to leave our car and caravan for the duration of our hike and close to the end of the trail. By the time we returned the hire car to the airport and taxied to the start of the trail at the Telegraph Station it was close to 11am and the heat was rising making the 13.5km trek to Wallaby Gap lugging heavy packs up Euro Ridge, laden with 6 days of food, exhausting with frequent stops needed to cool down. The late afternoon views from the ridge were rewarding though, looking back towards Alice Springs and the Gap and west to the Ranges ahead. The trail followed the ridge line for several kilometres before dropping steeply down to the valley below where we set up camp at the Wallaby Gap campsite as the light faded quickly around us. After a quick dinner and a wipe down we were into bed after a challenging day. Despite having electrolyte solution in his drinking water Kevin suffered agonising leg cramps and we questioned our ability to carry on, leaving the decision to see how we felt in the morning. A restless night followed as temperatures only fell to about 17 degrees making for a very warm night in our -10 degree sleeping bags! They did come into their own when night temperatures fell to the expected 0 to -4, waking to a layer of ice over the tent fly on several occasions. After that first day, daytime temperatures dropped to the high teens to low 20’s – much more manageable! Feeling better the next morning we pressed on to Simpson’s Gap – an easy 10.3km over undulating ground arriving about 1pm where we spent a leisurely afternoon chatting to some other hikers, wandering down to the waterhole at the Gap where we spotted several yellow-footed rock wallabies and later being entertained by a school group putting up their tents and cooking their dinner on trangias. Just what we needed to regroup, enabling us to press on, completing our hike a day earlier than planned at Mt Sonder. Highlights included camping overnight on Brinkley Bluff – the full moon setting on the western horizon competing with the sun rising in the east for our attention, scrambling through amazing gorges, Razorback Ridge, Counts Point and the view of Mt Sonder from the Hilltop lookout with our destination so close – to name only a few. 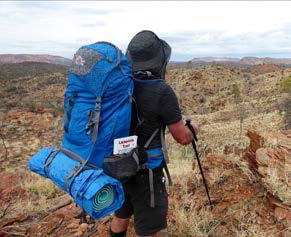 Flies on Kevin’s back 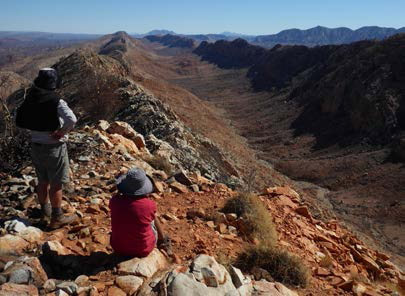 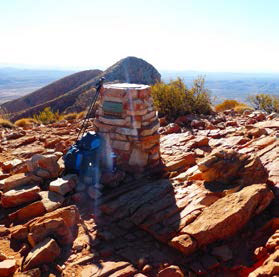 The cairn on Mt Sonder

One of the more noticeable challenges were the flies – the worst I had seen any- where – settling on you for a free ride, swarming all over your gear and food! Fly nets were a must, even then we managed to supplement our diet with one or two a day! Surprisingly in late August this year there were only a few, much to my relief and I didn’t use my fly net at all. Another feature of this hike is the amount of rocks – definitely have shoes with decent soles. Trail surfaces varied from sandy river beds and small stones to walking on vertical shale and scrambling hand and foot up and over car sized boulders. The epic views and timeless wonder certainly outweighed any of these challenges. 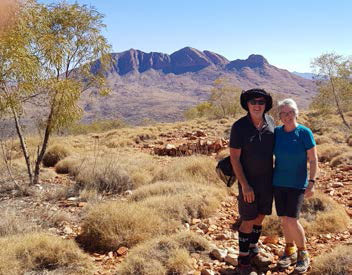 Hilltop Lookout with Mt Sonder in the background

Although Kevin and I started this hike alone we quickly ended up with a ‘hiking family’ with those walking the same stages, leap-frogging during the day and camping together at night which gave us the social aspect that many enjoy from the Caminos. I would certainly recom- mend this hike to anyone keen to get out and enjoy the rugged central outback, either as an independent hiker or with an organised/guided group. I’m looking forward to going back next year to hope- fully complete my solo hike challenge, a little wiser and slower!