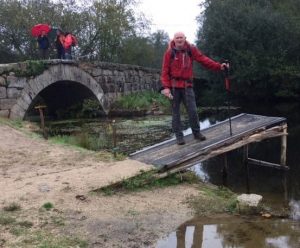 When I joined the Australian Friends of the Camino in May 2017, it happened that I was the 1,000th member to join so received an extra special welcome. Janet Leitch also suggested I might write an article on my return from my first Camino. The flow of words and images springing from the Camino seems inexhaustible, but being ever up for the challenge, I thought why not add my experience. 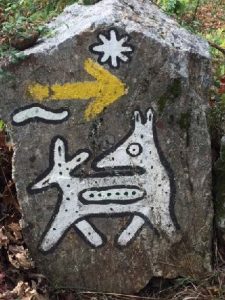 Like so many people the thought of walking the Camino had been simmering away on my mind’s backburner for some years without ever coming to the boil. In January this year however, as I was walking along a footpath minding my own business, a car skidded on the wet road and came to a sudden halt all too close to me. Only when I am being overly melodramatic could call it a ‘near death experience’ but I can be melodramatic at times. When I realised that I was in fact still in one piece, I immediately appreciated the obvious – that I am mortal and that my life will come to an end one day, so ‘get on with it!’ And the first thing I needed to get on with was to walk the Camino.

When I told my wife and two teenage sons of my ‘near death experience’ and my subsequent intentions their options were probably limited it must be said, but they did rise to the occasion and generously gave me time out for 3 weeks. Luckily that corresponded to the amount of leave my work would give as well. Not wanting to exhaust the patience and generosity of my family or my work, I chose a shorter Camino and set off from Porto on 17 October.

What struck me most about the Camino?

The silence and the solitude of the walk

I chose to walk alone most of the time and so the days were marked by hours of silence and solitude. My mind would wander of course over the full gamut of what it means to be human, the past, the future and sometimes the present. I could be taken by the beauty around me, reduced to tears for no apparent reason, squirm at my sins. Then as a gift received, I would be back to the
present, to the space within and pray a little before flying off again into the banal. I took to these days as naturally as breathing and only came to appreciate how special they were when they came to an end. I am now back to ‘normal’ life with its noise, but I remember fondly, and with some nostalgia, those days of silence and solitude.

The kindness of strangers

I arrived early one afternoon in the pouring rain at a small private albergue in Portugal. Luckily I had booked the night before as there were only 10 beds and I had been given the last place. That afternoon, four more people straggled in out of the rain asking for a bed. The hospitalero was hesitant but ended up saying yes to all four despite being already full. One of the four, a Canadian man, arrived in a particularly bad way. His ankles did not appreciate the Portuguese cobblestones and he was struggling to walk. The hospitalero got a basin of cold water, mixed in wine vinegar and salt and soaked his feet so that next day he was able to continue walking. As it turned out, four people cancelled their booking later in the day so we all fitted in and no one had to sleep on the verandah. ‘The Camino provides.’ But the generosity and compassion of that hospitalero lives on in my memory. 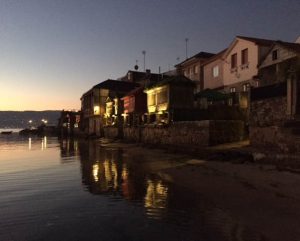 The beautiful fishing village of Combarro on the Variante Espiritual
We walk alone but together. I am not sure of the motivations of most of those I met along the way but I am sure they were quite diverse. There was very little discussion of what drives us to walk the Camino. The only time I was asked ‘why’ was on my return. Those I shared the Way with did not ask. There seemed an unspoken but common understanding which did not need to be, and maybe could not be, articulated. An understanding which exists in the gut and the heart but which the head finds hard to grasp.

For about 4 nights a group of us formed a little family who shared meals and stories at the end of the day. I am told this is a common Camino experience. It was good for a time but for me it was important to walk with the discomfort, vulnerability and openness that being alone brings.

I am still not sure what the appeal of the Camino is. As Shrek said, “It is like the onion: it has layers”. Layers of meaning which allow each person to do his/her own Camino in his/her own way. They say the first Camino leaves the deepest mark and mine will always be special for that reason but I still look forward very much to the next.

On a practical note, I ended up walking the Variante Espiritual, an alternate route between Pontevedra and Padron. A very beautiful way, much quieter with less pilgrims and more walking in nature. Highly recommended!