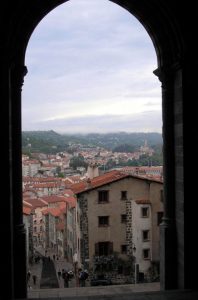 Setting out from the Cathedral at Le Puy

Le Puy en Velay is the starting point of the Via Podiensis, which joins up with the Camino Francés at Saint-Jean-Pied-de-Port, on the French side of the Pyrenees. Le Puy nestles among spectacular volcanic cones in the middle of France’s Massif Central. A huge statue of the Madonna dominates the town from the pinnacle of Rocher Corneille, while the Romanesque chapel of Saint-Michel perches on the summit of nearby Rocher d’Aiguilhe. The medieval Cathedral of Notre-Dame-de-France is surrounded by ancient houses, cobblestone lanes and long flights of stone steps. It’s here, early one May morning, I meet old friends Sue and Suzanne, to begin a week’s walk to the village of Nasbinals.

We collect our Crédentials and coquilles Saint-Jacques at a little office beside the Cathedral. The Crédential is a kind of pilgrim’s passport, which is stamped at gîtes, or lodgings, along the way. The coquilles are scallop shells, which, in medieval times, pilgrims would use to scoop water from streams. Modern pilgrims tie them to their backpacks as a symbol. After the pilgrims’ Mass,
we exit the Cathedral by the wide processional steps leading down through the town. We are on our way.

The day is full of birdsong and flower-studded meadows occupied by fat cows and docile donkeys. We stop for a cool drink beside wayside calvaires. Just before Montbonnet, our destination for the night, we linger in a tiny chapel where there is a statue of Saint-Roch and his little dog bearing a piece of bread in its mouth. According to legend, when Saint-Roch was suffering from plague, a little dog brought him some bread every day until he recovered. So Saint-Roch is not only the patron saint of pilgrims but also dogs and people afflicted by plague. As I write, I’m surprised we haven’t heard more of him in these last two years.

Leaving Montbonnet next morning, we traverse wind-stirred pine forests before descending to the village of Saint-Privat d’Allier for provisions. Climbing back to the plateau, we find a ruined fort surrounded by scattered hamlets. In the afternoon we make a final steep descent to Monistrol l’Allier, where we have booked accommodation for the night. 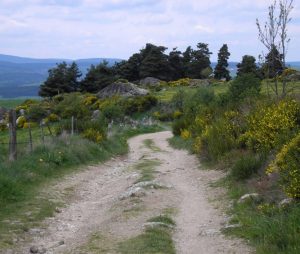 At Monistrol we discuss whether to book ahead for the rest of the week. Suzanne visualises arriving each evening in a beautiful valley where there are sure to be beds for us at a charming gîte, but Sue and I can visualise arriving somewhere where there are fewer beds than pilgrims so that we have to sleep under a tree in the rain. While Suzanne dreams on, Sue gets out the guide book and her mobile phone. There are some concessions we modern pilgrims feel we can make.

In the morning we climb again to the densely forested Margeride, where the Résistance grouped during the Second World War to combat the German occupation. The main village, Saugues, used to manufacture wooden clogs, but is now a town of dismal apartment buildings for workers making pinewood pallets. There is a tremendous sense of isolation on this plateau, once terrorised by a wolf-like creature called the Beast of Gévaudan. Here, if you happen to drink water from the footprint of a wolf during a night of full moon, you will suffer memory loss, hallucinations, confusion, delusion and aggression, among other things. So we didn’t.

We have booked at the farm of le Falzet, which has a full complement of pilgrims, and two extras, who are grateful to sleep on couches in the living area, as it pours outside all night. Dinner is delicious and satisfying, vegetable soup, mushroom omelette, roast pork and potatoes Anna, cheese and fromage blanc.

Next day the rain eventually eases to periods of sunshine. It’s a gentle 18 kilometre walk through forest. Larks flutter and warble through the trees. Clouds billow among the hills and drift through the valleys. That night, at les Faux, in contrast to the previous night, we  have a 20-bed dortoir, or dormitory, to ourselves and we wonder what has become of everyone from the previous night. 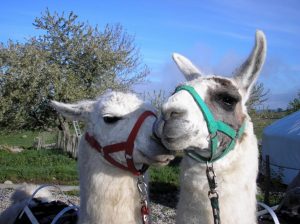 It pours again all night, but the rain clears during the following morning, which brings a succession of hills and valleys, with raptors wheeling overhead. We pass an old feudal fortress at Rouget, and stop for coffee in a bar at Saint-Alban-sur-Limagnole, where we bump into some of our acquaintances from le Falzet again. There is a steep climb before the descent to the Truyère River. We rest in a field of wild narcissi before reaching Aumont-Aubrac, where our accommodation is another large dortoir, this time bursting with pilgrims, three of whom have brought pack-llamas. Two of the llamas, Chrisophe and Colombo, have travelled the entire Chemin together previously. The third, Kenzo, is a novice and has been playing up so much that his exhausted owner falls asleep and begins to snore at the dinner table.

So far, we have greatly enjoyed the nightly meals, accommodation and company. Here, however, dinner is solid carbohydrate, unalleviated by any vegetable. In the dortoir, sleep eludes us. Our beds are next to the smelly bathrooms and throughout the night only the rain hammering on the roof occasionally drowns out the chorus of snoring pilgrims. Still, as Sue and I tell Suzanne smugly, it’s better than being under a tree.

The rain abates by morning, but has flooded much of the high marshy valley we are to cross today. We regularly run across the llamas. Christophe and Colombo are sturdy reliable creatures but Kenzo is a fine-boned, long-necked, high-eared boutique llama from Paris, who by his baulking and jibbing reminds his unhappy owner constantly of her mistake in thinking he could be a pilgrim.

We stop at Quatre-Chemins for coffee in a smoky little bar-café run by a lady with frizzy red hair, smudged stage make-up, a cigarette in her mouth and a nip of something on the counter. The coffee is a spoonful of noxious powder partly dissolved in hot water. A couple of pilgrims, who are returning to le Puy, warn us that the track ahead is flooded and we follow their advice to continue on the bitumen road to a higher point. Some of our companions from the previous night decide to follow the track anyway and an hour later we see them still splashing through the fields below as we gain the gentle rolling hills where the view unfolds of the Aubrac Mountains in the distance. We have one last descent into Rieutort d’Aubrac where we spend our last night in a crowded yurt.

The yurt is stuffy, smelly and noisy with snoring, and there are not enough blankets for everyone on this cold night. In the morning, there are also not enough breakfast bowls for the guests to be able to breakfast in one shift. Our group has opted to breakfast at 7.30 am, but someone appropriates Suzanne’s bowl and she has to wait for the following shift. Sue stays with her while I set out in the quiet cool morning on the hour’s stroll to the village of Nasbinals.

My solitary walk gives me time and space to contemplate the experiences of the last week, the beauty of the landscape, the ups and downs of life on the chemin and the variety of pilgrims’ hopes and expectations, including my own. I am sitting in a café enjoying a splendid coffee and some of the local strawberries, famous for their flavour and sweetness, when the others start drifting in.