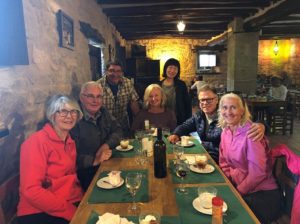 I’m a 68, (then 67) year old overweight (110kg, 6’1”) Sydney man who does a lot of walking. My wife and I do a walking holiday at least every year, last one was in June 19 – the Harz Hexen Steig in the middle of Germany – 100km over 6 Days, self-guided inn-to-inn walking with our luggage transferred. With mates I have done many walks – in 2017 we did Everest Base Camp, 3 of us plus 3 sherpas, no guide or prebooking. Started at Jiri, a week’s walk from Lukla to make the trip longer and took 25 days to do the trip. Outstanding.

Decided to do the Camino Francés in September and October 2019. In all my walks I like to do about 15km a day, 20 at a pinch, and I get really unhappy at any more than 20km so I divided 800km by 15 which gave me 50 days to do the Camino. I work for myself checking telephone bills for big companies, which is relevant since I had to take a lot of time off during the walk to create complicated invoices, cutting and pasting from phone bills to prove the savings. To do this I needed to add an iPad, keyboard and spare battery pack to my load, meaning my pack was 11kg (still only 10% of my body weight – if I put on weight would that mean I could have carried more?). I never found the pack weight to be a problem and carried it the whole way.

I had decided to do the walk by myself despite a few friends asking if they could come: I thought, and still think, that it is almost impossible to find a friend who wants to walk the same speed and the same distance over 800km. I’m blessed by being quite sociable so I knew I would have no trouble making friends along the way. I did not do any training at all, figuring the first week could be my training… that worked out fine. 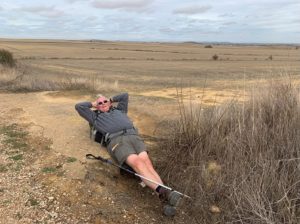 I also knew there was no way I could do Day 1 to Roncesvalles in one go – 25km plus 1400 metre climb, so I tried to book Orisson, which was full, but Gite Antton had room and would pick me up and take me back to Orisson. Perfect. That was the only night I booked from Australia.

Day 3 saw the start of my big moral dilemma. My Camino was just a grand adventure, not a religious or spiritual journey. As you know, those who have walked at least 100km of it get a Compostela to prove they have walked the Camino for religious or spiritual reasons, otherwise you get a Certificate of Completion. I reckoned once I walked the whole 800km I damn well wanted a Compostela, not just a Certificate, but didn’t that mean I would have to lie about my reasons for walking the Camino? Was it appropriate to walk an 800km spiritual journey and then lie about my
reasons for doing it? I asked various people I met what I should do, and it was very interesting seeing how the morality could be twisted around. No one at all said, “Paul just don’t lie”. On Day 3 I still had 47 days to ponder.

Day 3 also saw the first drama of the trip, arriving in Zubiri to find the municipal albergue closed, taking 50 beds out of the system. After a lot of trudging all around Zubiri trying to find anywhere with room, I finally gave up and caught a taxi to Larrasoaňa, only to find that full, and so onto Pamplona. Taxi back the next day and continue. Looking back it really was not the end of the world having to take a taxi to another town, but it certainly made me pre-book the night ahead for quite a few more nights until things settled down again. There was only one other time a town was full – Ventosa on Day 12.

I walked into Pamplona needing to take one day off to invoice, which turned into 2 days. This was the price I paid for taking 2 months off work, having to stop and work a few days each month along the Camino. At least I could socialise in the evenings with many newfound Camino friends at the Café Iruna, Hemingway’s famous haunt.

I spent the day in the bar area at the entrance to the Hotel Catedral doing my invoicing. 5 metres away was a guy who had given up on the Camino after the hard walk to Orisson, the walk from Roncesvalles to Zubiri and the drama of no accommodation at Zubiri. He was re-arranging his travel plans from returning on 16 October to now returning on 10 September. 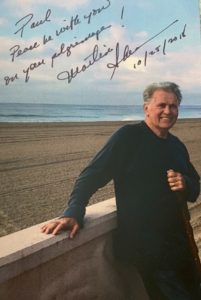 After hearing him re-booking flights and hotels for many hours, I wandered over and chatted to him. He explained the 8km walk and 700 metre climb to Orisson had beaten him and he caught a taxi from there to Roncesvalles. He hadn’t even gone over the top, in one or even two days. He was going to pull out then but his mates convinced him to do one more day, from Roncesvalles to Zubiri. After getting to Zubiri with its no accommodation drama he pulled the plug.

He explained he is 61 and “too old for this sort of stuff” (I didn’t have the heart to tell him I was 67). He had been planning it for over a year: he had even written to Martin Sheen and had an autographed picture from Martin. The guy’s name was Paul and my name is Paul. So I took a photo of it and thought now I can lie all the way over the Camino about my autographed photo from Martin Sheen. (Of course, in the end I explained the origin of the photo to everyone I showed it to, but it always got a laugh). Word got around on the track, at one stage someone said to me “Oh you’re the Aussie with the Martin Sheen photo”.

The spirituality of the Camino snuck up on me. I’m a big boofy Australian male and was just doing the walk for the grand adventure of it but the Camino surprised me. First time was about Day 6 at Casa Magica at Villatuerta, when I was having a few vino tintos with an American woman and her daughter plus 3 or 4 others. The daughters were taking turns a week about, doing the Camino to support their mother.

She divorced some time ago but had met a new man and were engaged to be married when he got sick with cancer. As the cancer got worse, he went into his room at home and shot himself to protect her from having to cope with his long slow death. I was sitting beside her and had my arm around her, and we were all in tears. We were the first people she had shared this with on the Camino. Phew!

From then on it became more and more emotional. While I was trying to top up my SIM card at the Café Jacobeo in Ciruena, a woman from Ontario, who I had said a few words to, sat down and joined me. We started talking and got onto the subject that this Camino is far more than a walk – it really is an emotional journey. In the end we ended up holding hands and crying over the guilt she had over various things that had happened to her daughter, which as a mother she felt she should have prevented. Phew again! Big hugs as she left, I hope a little un-burdened. There were many more similar episodes, perhaps brought on by my willingness to bring up the emotional side of the Camino. Sometimes I felt I had been Camino Angel so much I should have asked for overtime! That night I wrote in my journal:- “Perhaps my role in this Camino is to listen, sympathise and support, hold hands, cry and hug. It really has turned into a spiritual journey, I’m not going to have to lie any more”.

The highlight of the Camino for me was making friends with three women, Sharon from Atlanta, Jackie from England and Petra from Holland. Sharon and Jackie I had met at various times along the walk but Petra ended up beside me in an albergue. We cracked a few jokes, then she joined us at the bar and the four of us became instant Camigos. We had all booked the same place the next night, then Petra booked two more nights for us and we became great travelling companions for many days. Unfortunately their deadlines to return home meant the group could not stay at my slow 15km/day pace for ever and we gradually separated, but linked up again often on rest days in places like Astorga and Leon.

The final reunion of our four Camigos came as Jackie and Sharon arrived in Santiago and had one day to catch up with Petra who was flying out the next day. I was 3 days behind at Ribadiso and caught the bus from there to SdC to join the gang for one last grand night together. The next day I caught the bus back to Ribadiso to continue my Camino Interruptus.

Three days later I finished the Camino, in 49 instead of 50 days, and as all of us who have done it know, an outstanding personal achievement. I had absolutely no problem ticking the box saying the walk was for spiritual reasons. It was very emotional – the woman handed me my Compostela and a tissue.

How do you sum it all up? It was the most amazing experience of my life. By far the best part, was the friendship with Sharon, Jackie and Petra and those days we spent walking, laughing and joking together. Whenever I think of the Camino, I will think of them.

Next best was living for 2 months in that perfect world, where all of us pilgrims walk and talk with each other, we all eat, drink and laugh together, we look out for each other, and we support, hug and cry with each other. Then there was the lovely, smiling, laughing Spanish people, the countless beautiful Northern Spanish villages we walked through and the glorious scenery of the Pyrenees, Navarra, Castille y León and Galicia. 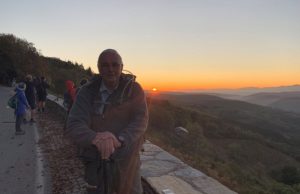 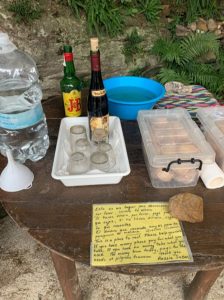