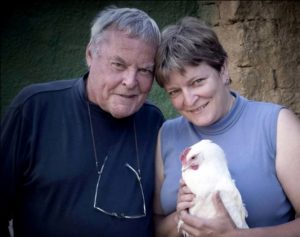 The seed for Peaceable Projects Inc. was planted back in the hot summer of 2004, at Fuenterroble de Salvatierra, a rambling, rustic albergue on the Via de la Plata.

My husband Patrick and I were volunteer hospitaleros, in charge of feeding and caring-for Don Blas, the charismatic priest in charge, and an ever-changing group of parishioners, pilgrims, homeless hangers-on. It was fun, easy work. It’s way too hot in July for most pilgrims to attempt the Via de la Plata. Don Blas and his ‘boys’ would wolf down anything we put on the table for them. There was plenty of food to work with – Fuenterroble is in the heart of Jamon country, and the farmers kept the freezer and fridge well stocked.

Trouble began on afternoon with a rubbery smell and a sudden puff of smoke… the fridge was on fire! We shut it down and pulled it away from the wall. The entire back was blackened, the electrical cords melted. There were many many kilos of meat inside. The clock started ticking.

One of the “boys” who was handy with tools took one look and declared the fridge beyond hope. He tied a rope around both doors so no one would open them and spill out the cold. The room filled up with onlookers. No one knew where Blas was.

“You better do something fast,” the fix-it man said. Everybody left. 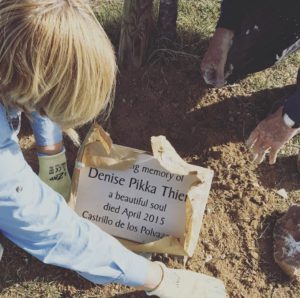 We looked at refrigerator – freezers. A new one was was 400 euros. We didn’t have 400 euros, but we did have a puddle forming on the kitchen floor.

I got on the telephone. I called five different Camino Amigos groups, run by good people who help to fund development on the Way. I told them this is an emergency. It’s not a lot of money now, but it will be a much bigger loss if we wait…

Two of them said I’d have to fill in forms and wait until after the next board meeting. One said no, their funds were committed to their upcoming Christmas Gala. One assumed I was a fraudster and hung up. Another said Sure, she’d call right back, and never did.

We were up the creek. We used our personal credit card to pay for the fridge. Most of the meat was saved, life went on. But I never forgot that afternoon.

We settled into our own lives on the Camino trail network, Paddy and I learned over and over how quickly emergencies can rise up, and how easily small pilgrimfocused enterprises can drown in unexpected financial disasters. Worn-out cars, water heaters, bed frames, downspouts… the camino was full of people spouting Providence, but for the little service provider there was no immediate help. Money was pulled from other funds, upgrades were delayed another year, maintenance put off until later. ‘Donativo’ doesn’t mean ‘free’… it also
shouldn’t have to mean ‘shabby.’ or ‘make-do’.

Patrick and I sometimes asked around for help when we learned about dire needs. We have hosted hundreds of pilgrims, many of whom stay in touch via social media. I’d put out a note, and people stepped up. I’d gather up the cash and hand it over. Very informal, under-the-table, ground-level charity.

Things got real for me in 2015, when FICS, an international activist fraternity, agreed to oversee albergue San Anton, a bare-bones albergue in a ruined monastery outside Castrojeriz. I went with a team of volunteers to clean up the place before the season opened. I used a vacuum on the mattresses. They dissolved in my hands, the fabric rotten along the seams.

The season opened in five days. We needed 14 mattresses, right now – €1400 worth. Big money that San Anton didn’t have. I put the word out via social media and email that afternoon, and the response simply blew me away. In 2 days we had enough to buy the mattresses, bedbug-proof covers, and new pillows! 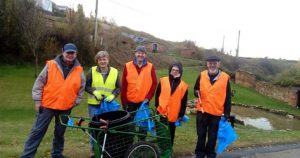 My son watched all this from his office in Boston. Philip is a lawyer. It was time to incorporate as a non-profit, he said – To offer donors a tax break, keep my accounts clean and separate, and just generally keep better tabs on everything.

Peaceable Projects Inc. was granted 501(c)3 charitable status in October 2017.  It has become a go-to resource for many of the small non-profit pilgrim shelters on The Way, and has funded everything from firewood, blankets, pots and pans to entire heating systems and plumbing renovations.

It’s not just a fundraiser. PPI provides an umbrella for Ditch Pigs Camino Cleanup, an annual litter-pickup program; the Pilgrim Memorial Grove outside Astorga; and Asociacion Los Angeles del Camino, a Spain-based PPI counterpart better positioned to raise funds within the Eurozone. We put needs of all kinds together with resources, sometimes in odd combinations.

With that fridge full of meat in mind, we keep at least $1,000 on reserve at all times so we can respond instantly to emergencies. I vet each request personally, and follow-up on each project. We take donations big and small, giving even the most humble donor a chance to “keep the camino moving.” 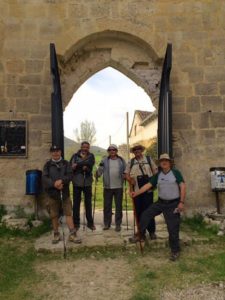