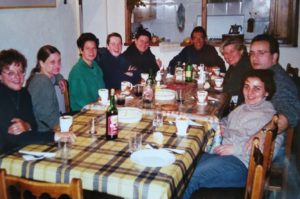 Grañon in March 2001 straight after the training course. Small numbers of pilgrims with no less than 3 hospitaleros in transit at that moment – Rob and I and the Frenchman sitting at the head of the table!

In late 2000 Rob and I packed up our lives into a Camino-yellow VW campervan called Morrison and headed to Spain to ‘live on the Camino’. Our dream was to open an albergue of our own, which back in those days was still quite a novel idea. Although we had firm ideas about the sort of donativo albergue we wanted to establish, we thought that spending a year volunteering in different places would provide us with a good apprenticeship before setting up on our own. We had already contacted both the Confraternity of St James in London and the Dutch Genootschap (Fellowship) for suggestions about setting up an albergue, so on arrival in Spain in January we got in touch with our one real contact, the parish priest of Grañón, who was in charge of sending voluntary hospitaleros to all the donativo albergues along the Camino.

We made an appointment to meet D José Ignacio Diaz, which felt rather like a job interview. After a quick introduction, he asked us if we had both done the Camino. We nodded eagerly. And did we now wish to become hospitaleros? Again, we nodded. That’s it! We were in! The only remaining hurdle – we had to attend a weekend training course to be held during the last weekend of March at Grañón.

That left us with two months to fill in. Our savings were dwindling fast after some major repairs to Morrison, so we decided to do a mid-winter Camino to take us through to March when the training would be held. We walked from Roncesvalles to Santiago in a biblical 40 days from late January through February until early March which provided another very different view of the Camino. In 1999 we had arrived in Santiago in mid-July, just in time for all the festivities and in very hot weather. This time we trudged through Galicia in knee-deep snow, often unable to see the yellow arrows under a blanket of whiteness. The Guardia Civil cruised past us from time to time, calling out to make sure we were all right. But for the most part the weather was relatively kind to us, with mud and wind being more memorable than rain. The mud around Los Arcos made our boots looking like Gary Glitter’s platform soles – you can understand why it makes such good pottery! 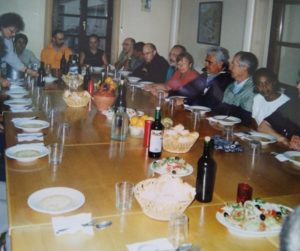 Sopa de ajo was served at lightning speed so it didn’t get cold. Pilgrims volunteering to recite a long-winded Grace were quickly steered towards the soup!

At a very grand concelebrated Mass in Roncesvalles there were five priests and three pilgrims – Rob and I and a dreadlocked Austrian called Martin with (as we later learned) not much more in his backpack than a tin whistle, some books and lots of incense. In Frómista we met our Austrian pilgrim again when he was involved in an altercation with a very edgy Dutchman who was doing the Camino as a way of quitting smoking, walking along plastered with nicotine patches. We were woken in the early hours of the morning in our bunks, being gently shaken by a Guardia Civil officer, which is not much fun. Apparently the edgy Dutchman thought Martin was making a pass at him and in defending his honour, he swung a punch which missed Martin but hit a bedpost, injuring his hand and making him even angrier. The hospitalero arrived and tried to settle things down but as neither pilgrim spoke Spanish and the hospitalero spoke no Dutch or German, the Guardia Civil were duly called. The hospitalero must have told them the two other pilgrims in the next dormitory spoke some Spanish, so at two in the morning we were trying to umpire a running translation/argument between Martin and the edgy Dutchman (whose name we never learned), until the Guardia told them both to pack up their stuff immediately as they were being escorted from the albergue. The following morning out on the road, a Guardia Civil car pulled up beside us to thank us for all our help the night before, apologising profusely for what they called “your bad experience of our town”, and reassuring us that the two others had been dropped off at separate albergues further along the way.

When we got to León to stay with the Benedictines we heard that Martin had somehow fallen off a bridge into a river with his backpack and been brought in to them, soaking wet, to dry out only a few days before. We met just 12 other pilgrims during our whole winter Camino, mostly quite uneventfully. Returning to Grañón, José Ignacio kindly allowed us to stay as ‘unofficial’ hospitaleros in the albergue until the weekend of the training course.

We were as keen as mustard and about as green. The season hadn’t really started but we had the occasional pilgrim to practice on. One of the most memorable of these was Isaac who arrived at the door one cold, windy night wearing boat shoes and carrying a zippered hold-all rather than any of the usual pilgrim gear. He said he had just been told he needed urgent surgery and was walking to calm his mind and decide what to do. We invited him in and during dinner, were really touched when he made every effort to keep up polite conversation with both of us. On learning that Rob was Dutch, he immediately began a detailed conversation about soccer trainer Johann Cruijff and the impact of Dutch players on the Barcelona football team. Turning to me and discovering I was English-speaking, he expressed huge admiration for the lovely Princess Diana and lamented her sad fate. After dinner he insisted on washing up single-handedly and retiring to bed early. 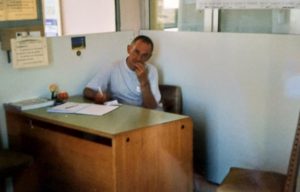 Rob waiting for the flood of pilgrims at opening time in the old secondary school building albergue in Astorga.: a grim building containing the largest dormitory I’ve ever seen – 104 bunk beds.

Very early next morning we heard our ‘practice pilgrim’ creep quietly out, dropping a handful of pesetas into the famous ‘Give what you can, take what you need’ Grañón donativo box. He understood how these things work, unlike many far wealthier pilgrims who arrived later in the season.

Taking in transeuntes (homeless people) was always a hard call. Even in the low season when there are beds to spare, we were very aware that the parish or ayuntamiento running the albergue operated on minimal funds designed to shelter pilgrims. Playing St Peter was always my least favourite hospitalero job, including trying to prevent bus pilgrims getting the scarce beds before those walking the long days had time to arrive. I was always told to just “let it go” but my fierce sense of fairness kept getting in the way.

During those probationary weeks I had my 50th birthday and my best friend came over from Australia with her daughter to begin their Camino. We had a lovely evening with our friends at La Taberna in Castrojeriz, along with a Dutch couple who lived there. I had Dutch apple-cake AND Tarta de Santiago! But on the way back to Grañón, Rob started to feel very ill and a few hours later he was running a high temperature which turned into febrile convulsions. José Ignacio and I called the doctor who gave him some serious antibiotics and advised rest, warmth and plenty of fluids. At this point, José Ignacio suggested that after a day or two’s rest, I should drive Rob home to our ‘house in Holland’ to recover fully. When I explained we had no home other than Morrison, he didn’t miss a beat before arranging for Rob to move into his spare room with the central heating turned up high. I stayed on in the albergue – only a couple of hundred metres away – and spent time with Rob when he wasn’t asleep.

One evening José Ignacio wished ‘Hospitalero Rob’ a speedy recovery in the prayers at the end of Mass. I thanked him later and he waved me away, saying it was the best he could do to stop the village women harassing him about who had been visited by the doctor at the albergue and at his house!

The last weekend of March was the long-awaited cursillo. The 24 prospective hospitaleros were all Spanish apart from one bilingual American girl, Rob and me. The whole course was conducted in fast, colloquial Spanish which was tiring enough, but added to the long, delicious meals, followed by story-telling sessions which ran till after midnight, we were exhausted. The ice-breaker activity after coming out to the front and announcing “My name is … and I’m from …”, was a large map of the Camino on butcher’s paper with the major towns marked. We were each then given three textas, a red, a green and a black, to mark with a stroke the place where we had received the warmest welcome, felt the greatest sense of hope and deepest sense of despair respectively and explain why! All in our rudimentary Spanish which was listened to graciously by our audience. 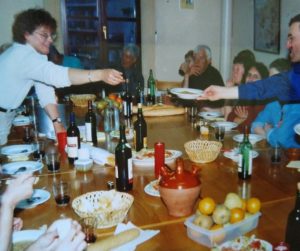 In Navarrete we cooked for up to 30 people a night, after which we had to use paper plates as the crockery ran out. Same menu every night…

After the cursillo we were fully fledged hospitaleros, ready to be sent out onto the Camino. We took up our first posting on 1 April (!) at Navarrete where we stayed for six weeks. We were two of only six ‘permanents’ and in high demand in that early part of the season. That year we also served at Santo Domingo de la Calzada, Astorga, El Burgo Ranero and Redondela on the Camino Portugués before returning to Navarrete for a final four weeks.

During that year we welcomed many hundreds of pilgrims to ‘our’ albergues and every day we learned something new. I was often moved to tears by the generosity of spirit of pilgrims and townspeople wherever we went – getting a donation posted back by someone who was mortified to discover he’d forgotten to put anything in the box, people singing for us at night with Rob playing the guitar, people just silently shaking our hand on leaving in the morning because they were unsure how to say thank you. And when our time was up and we had to move on, the genuine thanks from shop-keepers, and sometimes even the priest, were really touching. There is something incredibly special about offering hospitality to strangers without it being governed by a monetary exchange. At its core you are offering people a place at your table and under your roof as if they are family. When we provided an evening meal, no-one quibbled about menu choices – there were none. (It was all vegetarian). Pilgrims felt this warmth and were grateful. We never saw the contents of our donation boxes but were always assured that they were full – that yesterday’s pilgrims had made it possible for us to welcome those arriving today. But that was 20 years ago and life has grown a lot more materialistic since then. I’ve even heard of donativo albergues being listed on TripAdvisor!

I believe my greatest lifetime achievements are my four amazing children and walking and working on the Camino. Both were undertaken with minimal preparation or training – it was real on-the-job learning in every way. In the years since then we have served at Miraz as winter caretakers and had several stints at the lovely Grado on the Camino Primitivo where we look forward to
returning one day when the Camino re-opens to welcome us all back again. 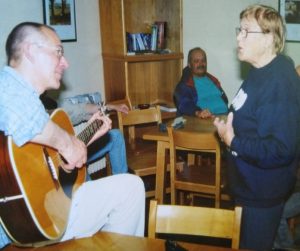 All albergues should have a guitar but as hospis, Rob always has his own. There are some extremely musical pilgrims out there!
Australian Friends of the Camino