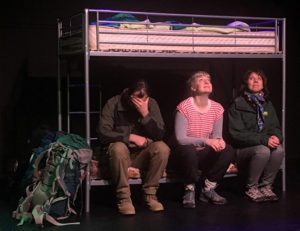 A scene from the play Blister

Recently I was privileged to view the premiere of a new play, Blister, written by one of our members, Sarah Peters. Directed by Tiffany Lyndall-Knight with a musical score written and performed by Rachel Bruerville, it is full of energy, humour, and endearing pathos. It is obvious Sarah has walked the Camino. Only a pilgrim could know of the situations and emotions that the numerous characters found themselves in – the noise and snoring in the albergue, the exhaustion and drudgery, the less than private bathroom facilities, the despair, and of course the elation.

These tales were told by the lead character, Rosie, played convincingly by Ashton Malcolm, along with her peregrino family. Ashton gave a convincing performance portraying the initial nervousness and doubt, the exhilaration, then a growing strength and compassion, as she dealt with the various peregrinos she met on her journey.

As on the Camino, this play was peopled with a variety of characters of all ages and cultural backgrounds. Characters like the 60-year olds Saskia and Paul from Holland, poor English Grace who had no idea what she had committed to, the compassionate Maria from Spain, Judy and Kate from Australia, and an older Danish pilgrim called Fred. Some characters touched a chord, one being
Alexander, a lonely, reticent, middle-aged Dane who had come on the Camino with a notebook in which people were to write greetings for him to read when he was older, and even more lonely. These characters, and more, were played by the talented duo of Hew Parham and Tamara Lee Collins. They flitted between characters as they leapt effortlessly around the world, from being an American peregrino, to a French, Welsh, German or a Canadian to name a few. Each change was convincing, and no doubt pilgrims in the audience had visions of similar peregrinos that they had met on their Camino. They had numerous idiosyncrasies and some became part of Rosie’s peregrino family.

Nearing Santiago, Rosie had some memorable dialogue… The familiarity of the Camino. In a country where I barely speak the language – with people I didn’t know a month ago – I find this routine very comforting. All you have to do is put one foot in front of the other – and keep your pack as light as possible. Likewise, these poignant lines: I love the simplicity of the Camino. The slowness of travelling by foot…. There’s something about how we are on the Camino that is teaching me about how I want to be in life.

A memorable performance.
Congratulations Sarah and the team.

Sarah can be contacted at: sarah.peters@flinders.edu.au