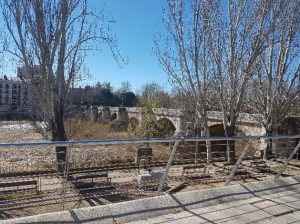 The first thing you notice when you turn the corner at Sahagun to head west toward Santiago is the people. I walked 313 kilometres from Madrid over 16 days seeing and walking with only 6 fellow pilgrims; from time to time. There were 18 pilgrims staying in Albergue Peregrine in Sahagun. This in late March so barely out of winter.

The second thing is you are no longer on the rolling paths and gravel roads of the lower Meseta. We were following main roads and nearby freeways. Noisy, dirty and getting crowded.

The Orange (Spanish provider) SIM card I bought in Madrid for local phone calls had packed it in 5 days out. I walked without any sort of phone until León. This is not a great idea on the plains. If you were to be injured a phone would be your only salvation. You cannot count on locals or passing pilgrims. In Leon the Orange people wanted me to buy another SIM card, then a new contract. I bid them a sour goodbye and went to Vodaphone. They were excellent, and as a bonus their phones worked in Portugal as well. What I am saying – do not buy anything from Orange. The service was poor at best, and the staff even poorer. Inept yes; caring no!

With Deb’s foot showing no sign of improvement, we headed towards León to visit the hospital and take a 3-day break. Another beautiful city, well worth a stayover to look around. Legend has it you must cross the Puente de Bernesga bridge (16th century) over the river of the same name to be considered a ‘real’ pilgrim. 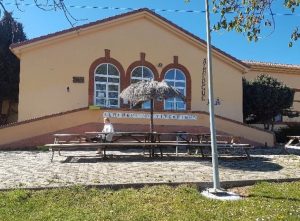 We walked 8 kilometres to La Virgen del Camino, only to find no services there or for the next 3 villages. Viladangos del Paramo boasts a converted schoolhouse – 80 beds. One huge room, not in use this time of the year and 6 dorms of 4 beds. John Brierley recommends a stop here – and rightly so. Locals were very friendly, food was great. I left my Teva sandals there for another pilgrim to use.

At San Martin del Camino it became a bus to Astorga for Deb, while I walked in. The path here is awful, with a soulless final part through the factories, then steeply up into Astorga. Stayed at San Javier behind the Cathedral with wonderfully kind host Matthias for 3 days hoping for any improvement. There is a cheaper pilgrim price for entry to the Cathedral and museum – show your credencial, pay and enter. You will love it.

After this point, I was to continue the Camino on my own. Two fractured bones in her left foot and a fractured bone in her right knee (compensating) had stopped Deb’s Camino.

This is not a story of failure, but of strength, courage and perseverance. With only 250 kilometres left, she will be back to finish her own Camino. I know it. So does Deb!

The extremely small amount of Spanish I had learnt and soon forgotten was to become a huge obstacle to my forward progress. In my opinion, the Spanish do not like English, or any other language. Learnt at school and then forgotten. Fiercely patriotic, all TV, advertising, etc is dubbed into Spanish.

Deb and I, on separate occasions, collected small stones from the gravesites of her mother and brother. We added to this collection on the Roman road of the Sierra de Guadarrama, the Meseta and on the mountain paths, as particular stones reminded us of lost loved ones. I placed these stones at the base of Cruz de Ferro with a prayer as a remembrance of them all. A few tears as well but the falling snow hid them.

Coming down out of the snow I encountered Australians running the albergue La Rosa del Agua in Acebo. I enjoyed my first vegemite toast since leaving Australia. It was wonderful to hear the accents of home. They generously gave me six sachets of the magic paste to help me on my way. At no stage could I convince my fellow pilgrims to ‘give it a try’. More for me! 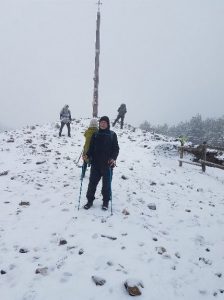 Molinaseca is beautiful. The river flows under ancient stone bridges from the mountains behind.

Met a young American girl from Colorado at the albergue in Astorga. As is the nature of the Camino I saw her again at Cruz de Ferro, 2 kilometres past Foncebadón, and again on the outskirts of Ponferrada. She had a slight limp and was looking altogether lonely and a bit lost. Feeling a bit similar, we walked together until Triacastela where she took an alternative route through via the Monastery of Samos, a 1000-year-old monastery. I did not see her again until Santiago.

Walking alone again. Pies are flat here but full of beef, gravy and potatoes. O’Cebreiro puts you in the mountains, Galicia and the dairy farms. I met two Danes, Flemming and Stine, walking together here, trying to catch up with another Dane, Dan. Next day I met them again. This proved to be the start of a great friendship, as we finished the Camino together, including to Finisterre. Flemming and I continued to Muxia. Then a week in Porto and Madrid with Dan before going our separate ways home.

After Sarria, we were joined by large groups of day walkers, and those who only had a week or so to complete the own Camino experience. €2 brightly coloured ponchos over day packs abounded. 40 kilometres today to catch up with Ben, a young German. In Barbadelo. (raining now) we stopped overnight; I met a Korean girl Junhye, who was known to the Danes as far back as St Jean. With Dan now there too, we numbered a small group of 6. We got our washing done here. We sat around in our underwear drinking wine and enjoying the setting sun in the valley below.

What I’m trying to say here is that you will meet, walk with, eat, drink and party with, and lose contact with, any number of fellow pilgrims. Some things we had in common, but somewhat different origins, languages, and/or reasons for being here.

The Way has become very crowded now. Portomarín is beautiful. Lots of water here as we are at the rio Miňo. Stayed at Airexe on 15 April. We are now phoning ahead to get accommodation. Melide, but no octopus dinner. Next stop was Boente. We are not stopping at the recommended stops in John Brierley’s guide now as they are proving to be very crowded. Another roadside stop at Brea made Santiago within striking distance.

Over a glass or two, Stine tells me there is only one mountain in Denmark – Sky Mountain at 175 metres. I had to laugh. Castle Hill, behind my house in Townsville is 280 metres. There are now only four wolves left in Denmark as well. I told the Danes about our 1.2 million feral camels. Disbelief all round!

Last day into Santiago. Looking at a push of 30 kilometres to the Cathedral. Everyone is excited and ready to go. Lots of people here now. It is Easter and a terrible time to arrive. There are an estimated 1 million people here for the festivals of Easter. The Cathedral was being repaired so a lot of it was closed. However, touching its outer walls, as I did so long ago in Madrid at the Church of Santiago, was such a relief and feeling of accomplishment that I was drawn to tears. We all were.

In Santiago, I paid far too much for accommodation, ate and drank too much, attended the Pilgrims Mass, collected my Compostela, including a free lunch for being in the first 30 there this day, enjoyed a welcome/goodbye dinner party at the café Casa Paredes (there were about 30 of us) and got ready to leave for Finisterre. 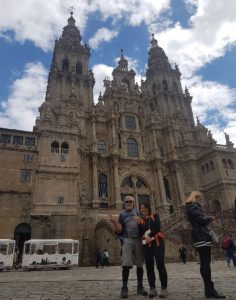 Kim Junhye and I at the Cathedral 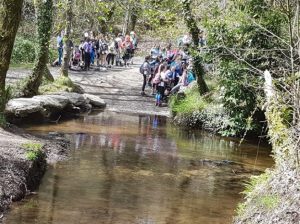 Crowds of walkers after Sarria 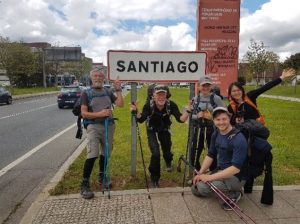 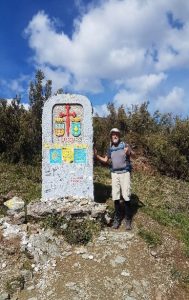 Crossing into Galicia
Australian Friends of the Camino