Map showing the Camino Ignatiano
20 May 2021 started the Ignatian Year which will last until 31 July 2022. The Society of Jesus (Jesuits) will be celebrating the 500th anniversary of a lost battle, of a wound that for Ignatius meant a failure.

Inigo de Loyola was born in 1491 in Azpeitia in the Basque Country in northern Spain. He was the youngest of thirteen children. His mother died soon after his birth. At the age of sixteen he was sent to serve as a page to Juan Velazquez, the treasurer of the kingdom of Castile. As a member of the Velazquez household, he was frequently at court and developed a taste for all it presented, especially the la- dies. He was much addicted to gambling, very contentious, and not above engaging in swordplay on occasion. Ignatius of Loyola became a soldier and courtier who was aspiring to great military feats and important positions at court. He was even dreaming of marrying a lady high above his station. On 20 May 1521, he was leading an army defending Pamplona against the French attackers. Hugely outnumbered, the defence was futile, but the vain Ignatius went through with it anyway. A cannon- ball struck his leg and his dreams of worldly success were shattered.

Because they admired his courage, the French soldiers carried him back to recuperate at his home, the castle of Loyola, rather than to prison.

His leg was set but did not heal, so it was necessary to break it again and reset it, all without anaesthesia. Ignatius grew worse and was finally told by the doctors that he should prepare for death. On the feast of Saints Peter and Paul (29 June) he took an unexpected turn for the better. The leg healed, but when it did the bone protruded below the knee and one leg was shorter than the other. This was unacceptable to Ignatius, who considered it a fate worse than death not to be able to wear the long, tight-fitting boots and hose of the courtier. He ordered the doctors to saw off the offending knob of bone and lengthen the leg by systematic stretching. Again, all of this was done without anaesthesia. 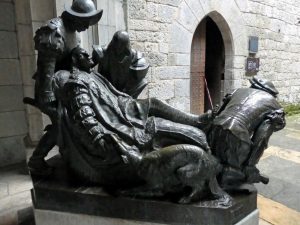 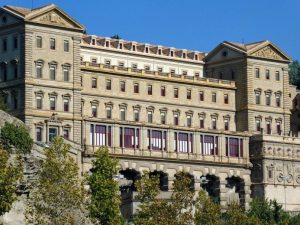 The monastery built above the cave where Ignatius lived and worked

The shell and the sun, signs of the 2 Caminos 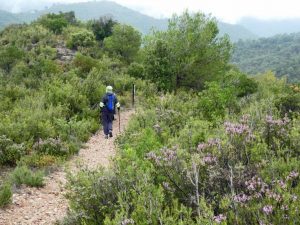 Heading to Manresa on the final day

This moment of apparent failure initiated a long process of conversion in which Ignatius discovered through reading about the exploits of saints, that God had a plan for his life that was much bigger and greater than he could ever have dreamt of. The cannonball moment was a sudden, hard hit, but the conversion was gradual and never-ending. After his spiritual conversion in Loyola, Ignatius felt the burning desire to follow Jesus Christ, and abandoned the life he had hitherto led as the son of a family of nobles. In 1522 Ignatius of Loyola travelled on foot from his home in Loyola, in the Basque region of NE Spain, to Montserrat and Manresa near Barcelona. This pilgrimage changed his life. His subsequent undertakings changed the world. Only nineteen years later, Ignatius would found the Society of Jesus (Jesuits).

This route known as ‘Ignatian Way’ runs from the birthplace of Ignacio in Loyola (a tower-palace of Azpeitia, in the Basque Country) to what is known as the ‘Cova de San Ignacio’ (cave of St Ignatius) in the city of Manresa (near the Monastery of Montserrat, in Catalonia).