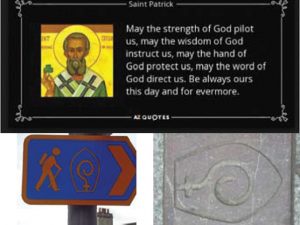 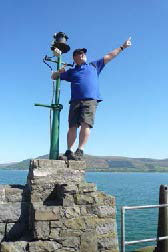 Sam oh so subtly spots a double rainbow, Carlingford Lough
My imaginings and adventure began when I stumbled across a St Paddy’s  Way Pilgrim Passport in Belfast last spring. I learnt that the Pilgrim Walk was conceived of by Alan Graham while walking the Camino de Santiago. After months of planning and the hard work of any, Alan’s dream became a reality and is now open to the public.

I can think of nothing better than strolling on a cool summer’s day, pushing aside the cares and concerns of an overly structured life, and visually feasting upon the shapeless green fields and unkempt hedges of the Irish hills.

St Patrick’s Way is a 132km (82 miles) trail connecting Armagh and Downpatrick. In my opinion the best time to walk it is during the northern summer, a much cooler and less crowded alternative to Spain. A couple of friends were walking as a warm-up for the Camino, testing both their gear and fitness levels. St Paddy’s way takes 6-10 days, depending on your pace, which allows you time at each stage to soak up the local fare. The various councils have put together an ‘Everything You Need to Know Pilgrim’s Guide’ for those interested.

Day 1 starts at the Navan Centre, an ancient fort just outside Armagh. The Navan Centre is one of Ireland’s most important archaeological sites estimated to date back some 7,500 years. It is the home of ancient kings and a place where legend meets reality. You can pick up your pilgrim passport at the Navan Centre or at any of the local visitor information centres. Stamp it at all 10 locations along the route as a souvenir of your journey and when you show your completed passport at The Saint Patrick’s Centre in Downpatrick you will get a certificate of achievement. Dr Tim Campbell, Director of the Centre, will personally present you with your certificate if he’s in an excellent photo opportunity. It’s only a short walk to Armagh so take your time and investigate the Navan Centre. 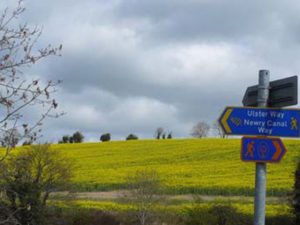 Walking the canal towpath between Scarva to Newry 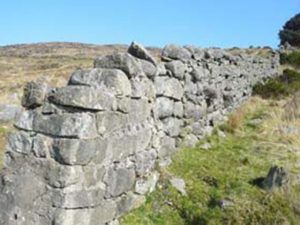 Trail signs in Kilbroney Park in the foot hills of the Mournes
Next stop is Armagh.  Saint Patrick established this city as a great seat of Christianity, as it remains today, and the city grew around his church. Places of great significance include St Patrick’s Cathedral, a museum, and off trail is the Franciscan Friary which is located in the public park near Palace Demesne.

The maps in the Pilgrim Guide are okay, but I suggest a more detailed map of Northern Ireland and an ordinance survey (topographical) map, the latter being of great value once you enter the Mourne Mountains. High-vis clothing is also a must, particularly on some of the country roads. 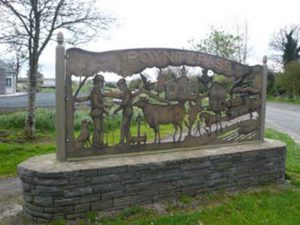 Poyntzpass, halfway between Scarva and Newry
The next destination is Scarva. Make a beeline to Scarva Visitors Centre Tea Rooms. You will be greeted by friendly faces, warm smiles and fantastic food! It is the last food stop before you arrive in Newry, so take advantage of their kind hospitality and have a look around at the historical display. You will walk along the oldest summit level canal in either Britain or Ireland, which opened in 1742: ‘The Towpath’ – flat waterside path – today serves as a walking and cycling path for the local community. 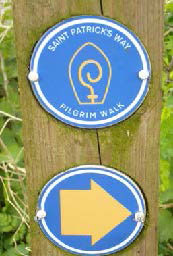 St Patrick’s Way Pilgrim Walk
At the end of the day you will be welcomed into Newry with its vibrant restaurants, pubs, and numerous shops, a heritage trail and flourishing art scene.

When the wrong turn is the right way

Not long after you depart Newry you start to see Carlingford Lough and the mountain views. Sidetracked by the natural beauty, I missed a turn and ended up in Ballyholland. I asked a local gentleman for directions which he was more than happy to give. After imparting some local history and the whereabouts of a landmark to see, we shook hands and I continued on my way. Within a few minutes I discovered the site which was well marked ‘Mass Rock’. A spectacular hilltop view greeted me complete with picnic tables – a fine place to rest and reflect. During the 17th & 18th centuries Catholics in Ireland were forbidden to practise their religion and had to resort to open-air ceremonies in remote areas.

They would celebrate mass far away from main roads and used large rock shelves or flat-topped boulders to serve as altars.

I was soon back on track walking through stunning scenery as I approached Warren Point and Rostrevor, both beautifully nestled into the top end of Carlingford Lough. Rostrevor is a picturesque village which contains many fine Edwardian homes, as well as Kilbroney Park. If you have time to spare, catch the ferry from Warren Point across the Lough and visit the medieval town of Carlingford which hosts the ‘National Leprechaun Hunt‘ each May. 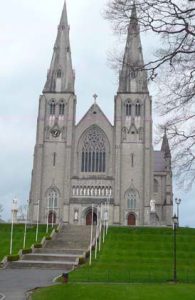 St Patrick’s Cathedral, Armagh
As you depart Rostrevor you will walk through Kilbroney Park, which author CS Lewis visited often during his childhood, and is said to have inspired his book Narnia. You will connect with parts of the Ulster and Mourne Way as you thread your way around mountain bike paths and continue through the foothills on the southern approach to the Mourne mountains. Remember to pick up an ordinance map prior to leaving Rostrevor, and keep in mind that accommodation is limited on this section, so pre-booking is recommended.

Saint Patrick’s centre, Downpatrick
Heading into the Mourne Mountains (without an ordinance map) I made a few wrong turns. Thankfully, knowledgeable local hikers were kind enough to point me in the right direction. Without their assistance I might still be trekking in and around the Mournes. After a couple of  wonderful  days  I  arrived  in Newcastle, which rests at the base of Slieve Donard, the highest peak in Northern Ireland. It’s another stop  that  is  worthy  of  an  extra  day,  with its beautiful beach and a wide selection of shops, hotels and restaurants. It is also home of the ‘Royal Co. Down Golf Course’, which hosted the Irish Open in 2015.

After a rest day to enjoy Newcastle I continued by heading north along the beach following the morning sun to the entrance to the Murlough Nature Reserve. Take a couple of hours and explore this unique sand dune ecosystem before following the Inner Bay through the village of Dundrum. Then it’s up and around the bay and back down the other side to the village of Bally Kinler which is the home of the last public toilet for a while, so best to take advantage of the facilities at the Vivo petrol station.

You then head inland into St Patrick’s country and Downpatrick where the Patron Saint established his first church and was later laid to rest. The Down Cathedral in Downpatrick has been a place of Christian worship since the 5th century. Many of the historically important sights are in a small area gathered around the Cathedral. The St Patrick’s Centre is where you get your last stamp and where you collect your certificate. 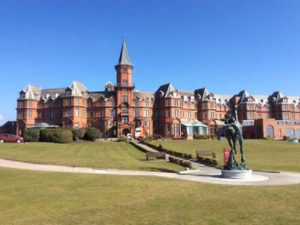 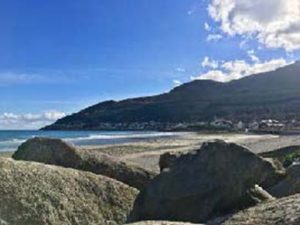 Newcastle, northern gateway to the Mournes
Australian Friends of the Camino