Read the previous part of this story.

It’s official. This area had a record heat wave (la canicule) during my hike. It was a scorching 37C on the afternoon I entered Montbrison (Loire). The next day, June 27, one station hit an all-time Haute Loire high of 41C. Low to middle 30Cs followed me, all five days from Montbrison to the finish at Le Puy. As our communal table enjoyed traditional Le Puy lentils at Grand Séminaire gîte, finally, an evening storm moderated the heat a little. I had scheduled the hike before, not after, the FIFA Women’s World Cup finals in Lyon 2-7 July. In the Loire, June is supposed to be a bit cooler than July. This year, both months were unusually hot.

My bible was the French-language Fédération Française Randonnée (FFR) guide for Cluny to Le Puy. The former town is about 90km north of Lyon, the latter 130km southwest. My mobile phone held back-up maps for Loire and Haute Loire départements. I sought to cover the 300km in 13 nights.

It’s a tricky section. Not so much topographically. The only steep gain is to summit Mont Saint-Rigaud lookout (1000m elevation) on the second day. It’s more the awkward gaps between settlements and the sparse accommodation. Local press estimates just 1500 pilgrims in 10 years. That’s tiny traffic by Spanish Camino standards. I met just 7 pilgrims, 8 with the dog. All fast-striding Germans.

Despite the isolation, there were communal gîtes or chambres d’hôtes half of the time. But for the Séminaire, I had these all to myself. Otherwise, I booked into hotels or lodgings. After one 37km-day that finished late in Propières, the gîte was locked and hotel full. “Courage” smirked the hotel lady. I backtracked to a grassy bit of chemin and inflated my mini mattress.

If that was a tough day, I lucked out on the morrow. Closing on the 36km into Charlieu, we heard that its accommodation was all taken. I hitched a ride 6km further with one of the Germans. A riverside caravan waited at Pouilly-sous-Charlieu campsite. Hot showers. Soft beds. For €7, la patronne served up chicken nuggets, frites, and Bordeaux. Classic cuisine. I couldn’t go past Pouilly patisserie, before crossing the Loire on the grand bridge. The next four days become the most charming phase. It’s one postcard village after another. 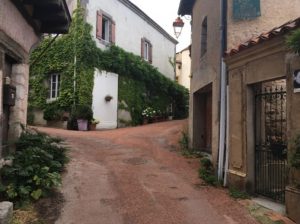 First up, Saint-Haon-le-Châtel, a delicate fortified affair atop a hill with a view. The walls are decorated with creepers and historical Haon photos. Each photo has a matching placard, with an apt quote from a French author. My hero, Flaubert, is included. Even the children’s play equipment has been fashioned into the shape of a fairytale castle.

Fortunately, the information centre is still open. They have a key to an empty three-bedroom place with a view. Donate what you wish. The shops are closed. The restaurant and a serve of Côtes du Rhône are no hardship. 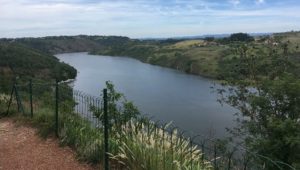 The mighty Loire, at Saint-Maurice

On the Sunday morning, another patisserie beckons, at Saint-André-d’Apchon. It’s fun to visit the Sunday market in Saint-Alban-les-Eaux. Except for the big fire-truck that totally screens the balisage marking the correct route down through the village park. Quickly, I retrace false steps. Just past Chatelus castle, a little stone bridge indicates the route eastwards to touristic Saint-Maurice-sur-Loire. At the Loire, once again, the information centre holds the key to the empty gîte.

Next day, the heat escalates. Entering tiny Dancé, a chatty local has open house and draughts of water. I rehydrate, just down the road at Amions. Luckily, there’s a proper fountain. Parks or public toilets in rural France, should you find them at all, are surprisingly often BYO water. A few more hare sightings, the forest through Pallance, a vista of autoroute, and there’s medieval Pommiers-en-Forez. The tourist centre is eager to show off the ancient priory and church. I prefer to shower first at the gîte. Corroborating the press story, this gîte has logged barely 50 guests since March. I walk down for pizza quatre fromages with wine from distant Béziers. 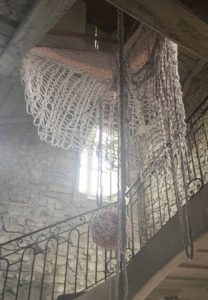 Pommiers, decorations in the priory museum

Just past Pommiers, a shop-sign warns of a long gap to the next coffee shop. An underwhelming 20km debouches on to the communal jardins de l’Astrée. In search of Montverdun, the straight-ahead is blocked. The right-hander can’t be correct. You go sharp left, over a poorly signed grassy track. Atop the volcanic pic, Montverdun’s impressively ancient priory offers an impressively cavernous dorm. Would the wilted monsieur care to purchase wine, plus dinner sent up from the village? Sure, you talked me into it. Wine appears directly. But the attendants scarper and the meal never materialises. Quel dommage. I raid the leftovers in the big communal fridges. Something rabbit, I think it was. Less said the better.

Beyond Montverdun, there’s a shady stroll on the forested slopes of Mont d’Izore. Champdieu bar et tabac offers beer and ice water. The big town of Montbrison is 7km further on, with no shade from the heat. Recovery is a cold hotel shower and a visit to the nearest supermarket. The next day takes me up and over another volcanic cone, Monsupt. All goes smoothly, till just past the village of Marols in mid afternoon. Bamboozled by too many rather than too few signs, I quit the forest for the sealed road. It will rejoin the chemin soon enough.

Climbing into La Chapelle-en-Lafaye (1070m), the late-afternoon light is amazing. The auberge isn’t open so I’ll self-cater. The deserted gîte is unlocked. You pin your 15-euro fee to the notice board and admire the view.

After La Chapelle, just past Montarcher, the chemin forks left onto 765E and right onto 765O. The latter option is 20km shorter and much less steep. 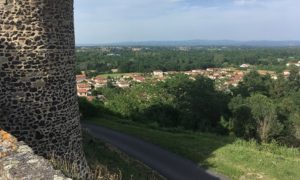 View from the peak at Montverdun

The next two days are vintage Haute Loire. There are long traverses through pine rather than broadleaf forest, on higher slopes closer to 1000m. Pretty, but larger gaps between villages call for navigational caution. Spotting my bruised toes, hosts in the valley at Pontempeyrat offer up a better class of band-aid. Plus more rabbit. There’s no TV. I can’t join the French millions to watch the soccer quarterfinal against USA.

Track maintenance seems haphazard in these parts. Leaving the hillside hamlet of Boudoux, the chemin appears to vanish in long grass. Reassured by precise FFR wordings, I locate the bridge in the valley just below. It’s not far to my sweltering west-facing hotel room at Bellevue-la-Montagne.

Next day, pine forest yields to scenic back-roads and pastures. At the locality of Freyenet, I realise that the official chemin veers off the road and up through a fenced-off pasture. This is a highly unusual occurrence. A jury-rigged electric fence nips playfully as you squeeze through.

From Bellevue to Saint Paulien is only a 12km day. It seems like a clever choice, spurning the dusty hotel for a private room on the edge of town. Merde, the big supermarket that I had earmarked is never open on Sunday. It’s back into town, for one last tilt at the restaurants.

The final day is also brief. It takes a few goes to find the correct exit from Nolhac village. FFR insists that I must split “le terrain de boules et le lavoir” (the boules pitch and the washhouse). Certainly narrows the options. After the big downhill into Communac hamlet, the ascending right-hander is not marked, not that I can discern. It’s 70m past the bridge, FFR confirms. Further on, the high fortress of Polignac is visible from several kilometres away. Now the cobblestones of Le Puy old town are very close to hand.

Lingering yet is the mystery of the female operatic voice floating out of the woods. She accompanied me, all along the ridgeline preceding the start of the Saint-Rigaud ascent. I don’t believe it was a recording.