This is 160km preceding the Moissac-Aire section, which I described last year in Camino Chronicle. I was constrained to late August, but I knew the (mainly) French pilgrims would already have thinned out. Still, I risked a hot week. So it turned out.

I planned 20-25km days, as suggested by the spacing between towns and gîtes. My ‘bible’ was the French-language Federation Française Randonnée (FFR) guide for Figeac-Moissac-La Romieu. Also, I had maps with me for Lot and Tarn-et-Garonne.

Due to a cancelled connection, SNCF had bedded a group of us overnight on a parked train at Paris Gare d’Austerlitz. My revised Paris-Figeac train only arrived at lunchtime, rather than early morning. A leisurely first day turned into rather a march. 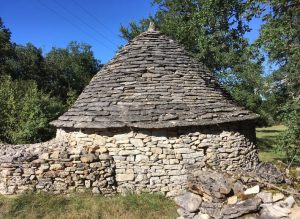 This being the Causses de Quercy, I expected a week of white limestone paths (sentiers blancs), dry stone walls (cayrous) and dry stone huts (caselles or gariottes). A local electrical-linesman pilgrim kept me company the first hour out of Figeac, before scooting ahead with a brief apology. Past Faycelles, the

forested track descends under a cliff to a spring. Around Béduer there’s a right fork for the alternate GR651. Mine was the more direct GR65 into le Puy Clavel. Round 7pm I reached my gîte-with-a-view, the only advance booking I’d made. As would be the norm for the week, I was the only non-French at the evening table. A local came round to my side to give me an impromptu back massage.

Day 2 went early through Gréalou and on to my lunch town of Cajarc on the River Lot. A missed turn at Cajarc cost time and I was late into Limogne. I started to feel, as they say in country and western songs, ‘rode hard and put up wet’. So I decided to quit 3km before Limogne at Mas de Dalat. But this gîte was closed for a family party. Monsieur gallantly dropped everything to drive me into Limogne. In France, being an Aussie is not the worst thing to be. 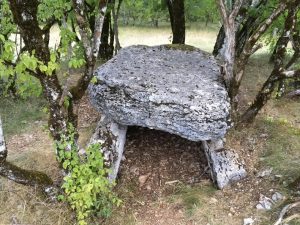 Next day unwound more limestone paths and walls. An interesting distraction was the Dolmen de Joncas. Skirting Varaire, I pushed on for a 3pm finish at Poudally, a short southerly diversion from Mas de Vers. Once again, I encountered a newer style of gîte. You stash your shoes and pack at the door, popping bedroom essentials into a plastic carry-tray. It’s meant to reduce the scourge of les punaises (bedbugs).

Overnight showers scarcely cooled the weather. This day my target was the larger town of Cahors. Care was required traversing the major A20 road. A greater hazard was a 20km stretch with no public water, on generally low heath in 30C heat. Sustained by wild blackberries, yet still feeling a little ‘Burke & Wills’, I drank up at the welcome booth on the bridge into Cahors. The ladies there explain that my intended gîte isn’t open. They direct me to a closer one, managed by a nice English expat. 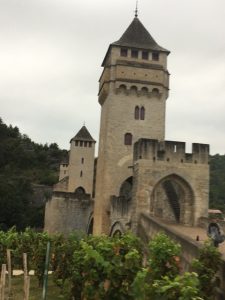 Noting 32-35C forecasts ahead, I’m still keen to finish in seven days. The GR65 leaves Cahors via the ancient Pont Valentré and scales the cliff directly behind. After les Mathieux, you drop down a very rough track into a forested valley. As you cross the D653, the GR continues as an alley directly on the other side.

Labastide is easily reached for lunch. No shops, but it does offer the sainted public water. Lascabanes is still 13km away. With some trepidation, I took a well-signed 1km diversion, to a recommended gîte outside of town. I needn’t have worried. The hosts had the best evening table of all, and they supped with the pilgrims. Also they knew a shortcut back onto the GR, past Lascabanes. 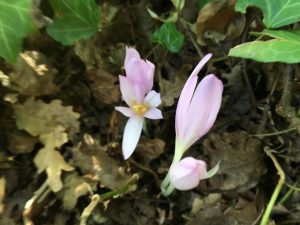 Next morning, the undergrowth revealed some of the noted Quercy orchids. After a forested section, a new GR segment is signed, diverting round a dangerous slope. At Montcuq, the GR quits the town (sharp south) the instant it reaches the town. It doesn’t hurt to check the maps for confirmation.

It’s a ‘busy’ day, as many as ten pilgrims sharing my way. I need a drinks stop. Soon appears a welcome private stall, set up beside the farm at le Sorbier. 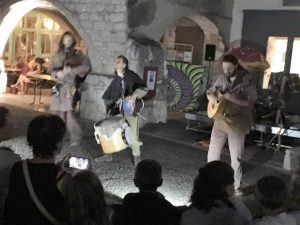 You see the ancient bastide (walled town) of Lauzerte well before you start the mildly strenuous climb. It’s worth persevering to the communal gîte high in the old town, rather than baling at one of the lower-down gîtes. For once, we are two non-French at the evening table. My foreign companion complains the French don’t switch the conversation to English, as people might in her home country. “Sure.” I reply, “The French are the French”. Then I recount the kindnesses I’ve experienced. The balm is that Lauzerte is hosting its annual medieval fair. We both like the musical trio, seeming to have stepped out of the Middle Ages.

FFR rates Lauzerte to Moissac at 25km. Madame of the gîte says it’s a bit further. My fellow foreigner is only going halfway. I start around dawn, trailing the French grandmother chaperoning her three grandchildren. Late morning, one passes the isolated but still-used church of St Sernin. Then another private stall appears, offering local melons and grapes.

Beyond the unprepossessing village of Durfort uncoils a long stretch of sealed road. Then I work through the eastern suburbs of Moissac. Its first recommended gîte is full. The second, with Irish expat hosts, looks equal or better. There’s time before dinner to check out the famed cathedral and cloisters.

I share my room with a pilgrim who’s gone lame on the hilly GR section before Figeac. She’s had to get the train across to Moissac. In the morning, I’ll train into Bordeaux, to drink in its futuristic Cité du Vin museum.

Read the next part of this story.