Stop for a moment. Really stop. Listen. Really listen. Why are we running like mice on a wheel? Why don’t we stop to enjoy the fact we’re still here? We are survivors. It’s sometimes lost on all of us, that we ARE survivors… and we ought to celebrate every breath, every moment.

The 2010s for me were about loss. Two little brothers died, one at 41 and one at 49. My father and father-in-law passed away within months of each other. I learned to live with life. Now we enter a new decade and my brother-in-law died of a heart attack this year. He was watching television and went to brush his teeth before going to bed. He told his partner he had pain in his chest and was dead 45 minutes later. He didn’t make it to hospital.

Stop for a moment. Really stop. Listen. Really listen. What are you hearing? “I’m still here”. It’s not “I should work harder, push harder, be everything to everyone, be someone I’m not… a hustler, when I’m kind”. If you’re truly listening, it’s a message we are perhaps frightened or reluctant to hear. “I’m still here, welcom- ing the message of life – and all its challenges”. Well, celebrate the fact you’re still here, on this journey of life. This pilgrimage. This journey of life and love. And, be brave enough to say this for you, and those around you: ‘I am worthy of love… I AM love.’

While we walk in the footsteps of St James… who walked to Spain to preach Christ’s word… we ought to strive to remember the message on James’ mind… Christ’s message. I AM love. If everything I do and say is framed by love, I can’t stray. Remember that joy of pilgrimage. The simple message you were sending yourself. “I am living simply… the best version of myself.”

Our world is a maelstrom of information, influence, pressure, work, family, bills, Covid, politics, heartache, frustration. We all, young and old, wonder if we’re up for the challenge. Well the answer is YES. I AM love. Even at your most secure, you’re often at your most vulnerable. Tough it out. It’s worth it. Your pilgrimage of life will be well worth the journey.

When I returned from my first Camino, I immediately wanted to return. The Camino was calling me with a pronounced clarity… a palpable reality. I decided I would walk from Lourdes in France—the home of the sick and infirm hoping to be struck by the lightning of blessing and rescue—to Santiago de Compostela. I would walk a Camino of discovery. I carried a parlour guitar on my back and promised to sing for whomever asked. That was my only narrative. I would sing for whomever asked. 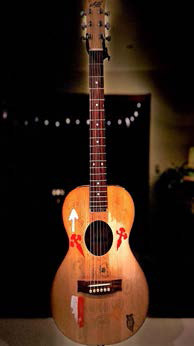 I sang in town squares, in churches, in albergues, in pubs, in clubs… I performed a feature concert in a 500-year-old winery in Villafranca del Bierzo. Rather than getting stamps in a credencial, I got MY stamps on the guitar. It became a journey of its own… fellow pilgrims would point me to chapels, cafes, little stops… any- where with a narrow alley, a cloistered opportunity, with an interesting stamp and inkwell. An opportunity to leave a mark on a guitar that had left a mark on them.

I love sellos. They’re little snapshots of your adventure. Little ink marks of your pilgrimage. If you look back now, every single stamp tells a story. They are on my guitar. Though faded and blurred—much like me—they represent little episodes of joy that I can still hear every time I strum a chord of that 1000km journey.

Just days before I headed off, I had the guitar blessed by Father Andrew Sempell, Rector of St James’ King Street, Sydney. We stood beneath the arches of the old church, consecrated in 1824, and Fr Andrew placed the very first stamp on the guitar. A red shell. Fr Andrew blessed me.

Not far from where we stood, there’s a brass statue of a homeless man asleep on the street bench, covered in a rudimentary blanket, cowering from the world. Sometime after that original stamp sank into the flesh of my guitar, I took a picture of the homeless statue.

Years later, sorting through the audio and photos, I zoomed in, and there, in the feet and hands of this ‘homeless pilgrim’, were the wounds of nails. The wounds of Christ. This was no homeless pilgrim… this was the ultimate pilgrim. The pil- grim in whose footsteps we all hope to walk. Peace and love.

Here was OUR pilgrim, sleeping on the bench outside the church named in honour of one of the homeless pilgrim’s disciples. I was struck by my blessing of insight and discovery. This was just metres from where my guitar—and I—had been blessed. I was ready to embark on the journey of a lifetime. The guitar was to become my guide… my talisman. And what a talisman it was…

I was walking the Camino Francés between Burgos and Hontanas – where the Meseta begins to open up before your eyes. Walking alone, I could hear and feel the crunching of the gravel beneath my feet. Coupled with the clicking of my walking poles, the rhythm was having a metronomic effect. I always sing when I walk, I don’t listen to music, I sing.

Sellos on a soundboard, beneath a field of stars,
La familia growing, crossing fields afar
Will you walk beside me, will you lead the way
Your footsteps by the fountain, carry me away.
How will I ever forget, the Spanish sunrise, the Spanish sunset
El peregrino cantante, fullness of the moon,
Prayers beneath the arches, sunflowers in bloom
Words on parchment paper, fill an empty room
I hope this blessing, such as it is, finds you in full bloom,

The entire song was there in my head, something that had never happened before.

I arrived in Hontanas early afternoon. I had made a pact with myself before beginning my Camino, if anyone asked me to sing, I would. As I entered the old town down the gentle rocky slope, I passed a bar/albergue on the left, with a lovely green lawn and umbrellas and chairs. It was inviting, but I was determined to get to the municipal albergue to write this song.

Voices from the beer garden called “Hey peregrino, hey!!” “…canta para nosotros peregrino. Trae tu guitarra y canta.” they cried, “Sing for us pilgrim, bring your guitar and sing”. So I paused and, remembering my pact to sing for whomever asked, I turned back and headed into the beer garden. They were Spanish friends, all professional golfers, who had known each other since they were boys. They ride a section of the Camino each year as their annual catch-up. One of them had crashed his bike and was taken back to Burgos to hospital. His friends waited behind to work out what to do with this bike and gear. I sang for them for about an hour, certain I’d forgotten the song.

By the time I arrived at the albergue it was late afternoon and I quickly checked in, showered, washed my clothes and headed to the local cafe to try to remember the song. I grabbed a serviette (you travel light as a pilgrim) and wrote out the lyrics, word for word. I didn’t even pick up the guitar to play it through. It was in my heart and it remains there today. I don’t know where it came from and I don’t know where it’s taking me. I played it for pilgrims that night in Hontanas and they loved it.

The following day a French pilgrim walked up to me in a cafe. “Where are you staying tonight please?”, he said. “I’m not sure” I replied, “Why”? He said he wanted to hear my Camino song. “But you weren’t there last night, were you?” I asked. “No”, he said, “An Italian pilgrim played the video she shot last night for us in a cafe this morning.” He said he loved it.

So began the journey of Somewhere Along the Way (the Camino Song). The video, shot by award-winning Australian filmmaker Bill Bennett, has been viewed almost 100,000 times on YouTube. I’ve played the song twice for the Prime Minister of Australia at his formal Sydney residence, Kirribilli House. I’ve done shows in Spain and the US. Magic opportunities. I have played it interstate, at parties, live concerts, on radio around the world, on television and in people’s lounge rooms— and of course at the AFotC Conference in 2019.

I get a handful of messages from around the world week in, week out, from people thanking me for the song. Every single week. I should be the one doing the thanking. It came from nowhere—but is taking me somewhere. Along the Way.

I host a weekly podcast about the Camino. ‘My Camino – the Podcast’. I was lucky enough to interview the American pilgrim Bernie Bonar a few years back. He built me a Camino ukulele (see photo)— and I play it every day. He built me the instrument as a gift, from one pilgrim to another, to keep the Camino’s music alive. It arrived on Christmas Eve two years ago. Bernie didn’t tell me he was making it. He simply sent me a gift of music… of love… from one pilgrim to another on opposite sides of the world. A tear welled in my eye as I strummed the little instrument that Christmas Day, teaching myself how to play songs I have played on guitar since I was a boy.

It is a blessing, a reminder of the joy of pilgrimage. I remember playing guitar and ukulele with my late brothers. The joy of sharing… and the joy of family. Oh, if I could wish for something, it is to live that day again. Oh, and that you find love. For YOU. Like Christ’s love. The love within you.

Pull a blanket up over a homeless man—physically and metaphorically. You never know who lies beneath. There for the grace of God, go you and I. Pilgrims walk the Camino, experiencing the most magical and invigorating renewal. It’s simple really. It’s love.

And it’s everything Christmas represents in all our lives. Our histories. The most wonderful memories. Merry Christmas to you and yours. I look forward to our paths crossing again in 2022. Until then, I hope you find what you’re looking for, somewhere along the way. Buen Camino!