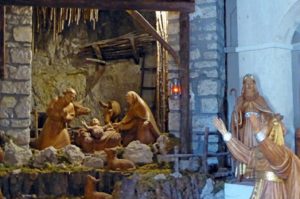 The Cammino di Assisi / Cammino di Francesco has been walked by a number of our members, and all return with glowing accounts of their journey. I was fortunate to walk this ‘road less travelled’ in August 2014 (See CC issue No 11, December 2014), which is becoming increasingly popular. It is a wonderful route, challenging, but exceedingly beautiful, passing through many historical, and well visited, Tuscan and Umbrian hilltop villages. During the day these villages are packed with tourists who disappear in the late afternoon and a pilgrim then has the opportunity to explore ‘tourist free’ for the evening.

The Cammino di Assisi is noteworthy because, among other things, there are marvellous monasteries to visit along the way, usually perched at or near the top of a hill. Each with stunning views and all having with a strong association with St Francis. One of these monasteries is on the outskirts of the village of Greccio. It was here on Christmas Eve, 1223 that St Francis was granted permission by Pope Honorious III to have a creche (nativity scene). Set in a cave, this first creche was a living one, complete with a manger full of hay along with an ox and ass. It is believed that St Francis included a carved doll, but it is not known if adults were represented or if people were expected to imagine them. Today the monastery has a collection of nativity scenes from around the world.

The custom of assembling a creche at Christmas time spread throughout the country and around 70 years later (1291) Pope Nicholas IV actually ordered a permanent nativity scene be erected in Santa Maria Maggiore, Rome. Nativity scenes began to appear in art works too, such as the glorious frescoes created by Giotto di Bondone in the Cappella degli Scrovegni in Padua which is on the Cammino di Sant’Antonio.

In Spain, those fortunate enough to walk the Camino Francés over the Christmas period will find it impossible to miss the numerous nativity scenes that appear in bars, restaurants, churches, and even albergues, along the way. In almost every bar along the way a beautifully constructed nativity scene can be found complete with shepherds in the hills guarding their sheep, villagers sitting outside their homes, the wise men winding their way towards the manger, and all set in a life like scene of the countryside. I was fortunate enough in one bar to watch a man create his nativity scene, with great attention to detail. 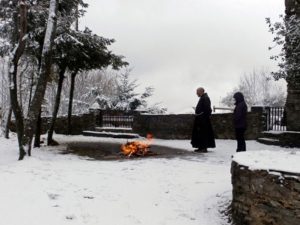 On reaching O Cebreiro I was too far into the New Year to view the nativity scene in the Church. It was deconstructed that morning. I watched the priest warm himself by the fire he had lit with the debris.

The bigger the church the bigger the nativity scene. In the Cathedral at Santiago de Compostela from 5 December to 7 January, pilgrims can visit the nativity scene (in Galego – belén) installed in the south arm of the transept. In 2019, with over 550 hand carved figures, some automated, it stood around 50 m². Not only were the traditional scenes of the Christmas story represented, but so were scenes of daily life with villagers participating in traditional trades. Though not as large as the Cathedral’s scene, the Pilgrim Office in 2019 had a smaller belén of about 30 square metres!

The tradition started by St Francis nearly 800 years ago has spread around the world. Nowhere is it more obvious than in Italy and Spain, and so very different to the comparatively tiny nativity scenes we plonk on a cupboard or bench here in Australia. It is a privilege indeed to make a Camino over the Christmas season and see the extraordinary lengths that people go to when crafting these delightful scenes. They become works of art, constructed by artists! 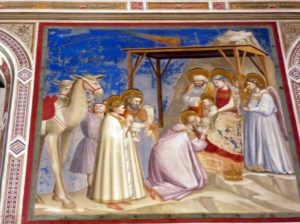 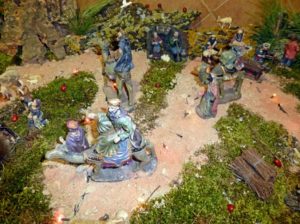 An outdoor nativity scene in a church 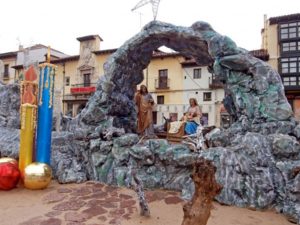 An outdoor nativity scene in León
Australian Friends of the Camino