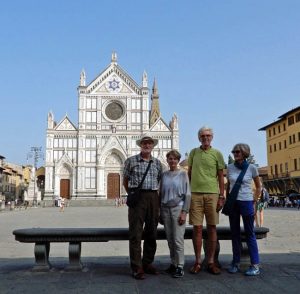 Having walked into Santiago de Compostela in each of the past four years, this year we decided to do a different Camino and walk the Way of St Francis from Florence to Assisi.

Walking with me this year were Paul and Jane, who walked the Camino del Norte last year, and my wife, Judy, walking her first  Camino.

Initially we flew into Milan and decided to dispose of our excess baggage there. Italy does not have baggage transport and storage services like those in Spain and after several enquiries we used the Italian Post system. The limitation with Post Italia is that they will only hold bags for 10 days at the receiving Post Office. The solution was to post the baggage to Gubbio, and then on-post it from there when we arrived.

From Milan, we took a train to Florence and overnighted there before commencing our walk on 31 August. We had hoped to be able to obtain Credencials in Florence but found that St James Episcopal Church which issues them closed for the month of August. Notwithstanding we did visit the Franciscan Church in Florence, the Basilica Di Santa Croce which is the official starting point for the Camino. Credencials can be obtained in advance by contacting www.viadifrancesco.it and downloading their PDF form. The guide book recommends that this application be completed at least 2 months in advance of your walk. As we did not have credencials, it is obvious that we failed to properly read the instructions before leaving Australia. 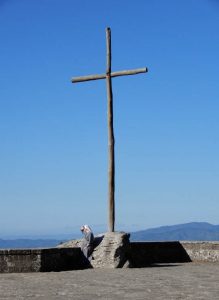 We used the Cicerone guide, “The Way of St Francis from Florence to Assisi and Rome” by Sandy Brown, plus the GPS tracks that can be obtained free through Cicerone. Sandy’s guide is comprehensive and gives detailed directions which need to be followed as the way marking on the section of the walk from Florence to Santuario della Verna is very poor. We used the book, plus the GPS tracks loaded onto two iPhones, and still managed to wander off track from time to time. Relying on the book alone could lead to some unpleasant detours. We walked for a while with an American who freely admitted that without the assistance of our GPS tracks that he would have been easily lost.

Walking out of Florence was pleasant and not the usual seemingly endless kilometres of industrial suburbs. The way was shaded and past very pleasant parks and gardens almost all the way to the outskirts of the city where the route passes Villa Gamberaia. Judy and I had previously visited the gardens there 5 years ago so it was a surprise to come across a landmark in Italy that we were familiar with. From the villa, the day warmed up and we were walking in 36 degree temperatures. The walking became most unpleasant and we were glad to complete the days stage into Pontassieve. Overnight it rained breaking the Italian heat wave (Rome had not received any rain for over 3 months) and provided more pleasant walking conditions for the remainder of our Camino.

At our second overnight stop in Consuma our host asked if we required stamps in our credencials. On finding out that we did not have any, we were unexpectedly provided with the documents. We sincerely thank Irina of Panificino e Pizzeria for both the excellent accommodation and the credencials. Incidentally while the Pizzeria only serves pizzas at weekends, l can recommend the gnocchi with porcini mushrooms.

The terrain covered by the Camino is relatively hilly and we would rate it as being much harder than the walks in Spain. On our walk we averaged around 21km per day with an average climb and decent of 750 metres per day. While the days were shorter, the climbs and descents were harder and more frequent. Most stages did not have services and we carried sufficient water for the day plus snacks, lunch etc.

Accommodation was varied, and we stayed in rooms, Agriturismo properties, convents, hotels and B&B’s. Generally we tried to book two days ahead to ensure that we had accommodation. During our walk, there appeared to be about 12 pilgrims walking at the same rate as ourselves and an extended group of perhaps 20 whom we met and were either just ahead or just behind ourselves. 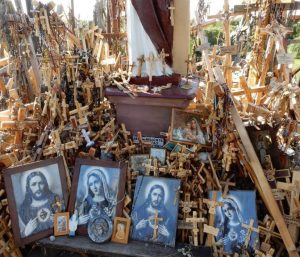 Favourite places where we stayed included Santuario della Verna, Sansepolcro and Gubbio. The walk into della Verna was spectacular through an area called the ‘fairy-tale forest’, with boulders covered in green moss and sunlight filtered through layers of birch leaves. 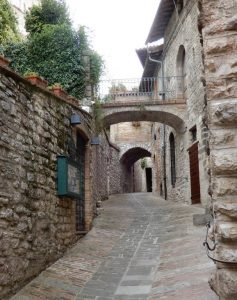 At Sansepolcro there was a festival in the evening when we were there, with men in tights shooting ballistas (cross bows) to qualify to shoot against Gubbio. Apparently the competition between Sansepolcro and Gubbio has been ongoing for hundreds of years. The competitors shoot at a 150mm diameter target over 36 metres with surprising accuracy. The whole town turned out to watch the competition which included drums, trumpets and other medieval pageantry. Although we had a rest day in Gubbio, we missed the big match but were happy to learn that Sansepolcro won. Gubbio is a semi-hill top village and a wonderful place to spend a rest day. Lots of interesting old buildings, churches and cobbled streets. We were able to arrange for the Post Office to keep our excess baggage for a further 3 days, which eliminated the need to post it on to Assisi. Another interesting town was Stia. We were unable to stay in the town as it was fully booked for an international blacksmiths’ event. The town was full of blacksmiths including a contingent of 6 from Australia. Eventually we were able to find accommodation at an Agriturismo property 6km out of the town where the owner happily picked us up in Stia and delivered us back onto the route the following morning. 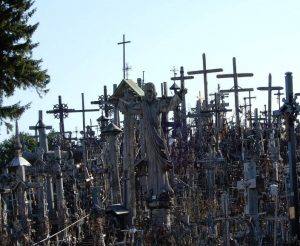 While staying in Pietralunga it rained overnight, and continued to rain heavily for the duration of our 26km walk into Gubbio. We arrived at our destination very wet and tired. The rest day gave us an opportunity to dry out our clothing footwear and gear. While the Airbnb we were staying in had no heating or dryer, we made very good use of the electric oven. 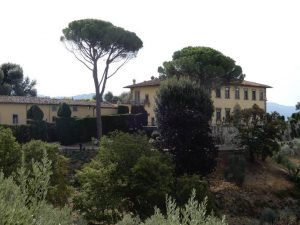 Much of the walk was through forests, proper European forests of beech, oaks of many varieties, birches, firs and various pines. Not a eucalypt anywhere. While not seen in the forests, the stone pines throughout Italy are particularly impressive. We also found that there were no storks in Italy on our walk which was disappointing. 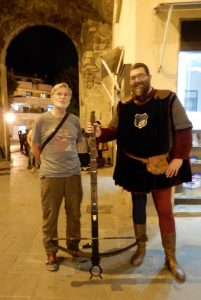 John (left) with a Ballister archer

On arrival in Assisi we visited the Basilica di San Francesco and received our testimoniums confirming that we had walked at least 100km to Assisi. It was interesting to see that the Basilica was controlled by army personnel with sub-machine guns, who security checked the bags of all persons entering, while obvious pilgrims with packs and poles were allowed to enter unchallenged. 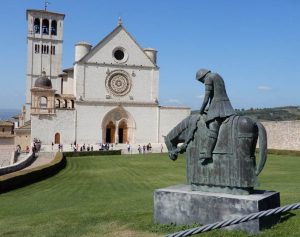 After a day wandering around Assisi and hiring a car to retrieve our excess baggage from Gubbio, we took a train to Rome where Paul and Jane departed for Sicily, while Judy and I took in the sights before flying to Greece and home to Melbourne.

Prior to travelling to Florence, we spent time in Lithuania and visited the Hill of Crosses, an important pilgrimage site there. The hill is covered by an estimated 200,000 crosses and is a spectacular and moving sight. We understand that during the Soviet occupation the Russians tried to bulldoze the site, but the crosses kept returning.

Overall, we walked approximately 280km with ascents and descents of around 10,000 metres in 13 days of walking.