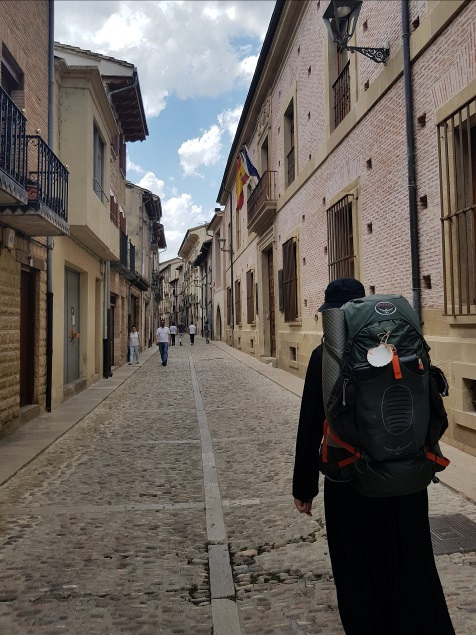 In the footsteps of the ancient pilgrims

The Camino de Santiago de Compostela – a name now familiar around the world – was once an exclusively Catholic religious pilgrimage, that is, a journey made to a sacred place with the purpose of venerating it, or asking there some supernatural aid, or to discharge some religious obligation. While during medieval times it was second only to Rome and Jerusalem as a place of Christian pilgrimage, there are perhaps few today who undertake to walk the Camino with such explicitly religious motives. Nonetheless, the road to Compostela still retains a mysterious power to influence, in a remarkably spiritual fashion, the numerous pilgrims that tread it.

The hidden attraction of the Camino is not the only mystery for many pilgrims that walk in its path. The very name of Santiago means ‘St James’ – and perhaps some have asked themselves in the quiet hours of their pilgrimage who he was, and why his tomb lies in this far-flung corner of Spain. Perhaps, too, the significance of the Holy Year – proclaimed at various intervals when the Feast Day of St James (July 25) falls on a Sunday – is obscure to many pilgrims. This article is an attempt to answer these questions and give some glimpse of the Catholic heritage which this now famous path entails.

The present-day pilgrim in our secular age may have only a vague cultural memory of the religious motives that prompted our ancestors to travel such a long and certainly perilous journey. This, at a time when long distance travel was hardly a luxury even for the very rich, and when the path was not so clearly marked by las flechas amarillas and the scallop shells so familiar to us today. Even those who have walked the Camino de Santiago as a spiritual quest may find much of the Catholic tradition of The Way somewhat obscure. What was it that drew pilgrims to the end of the earth – as it seemed – in those times? Certainly it was not the hope of any worldly gain, for the traveller of the past had much to lose, much to suffer, and almost nothing to win (except it be a story to tell by the light of the fire on his return).

For the Catholics of the Middle Ages, however, for whom God and heaven were very near and very much part of their daily life, it was only natural that they should risk themselves and their material goods to seek a spiritual gain. One sees a striking image of this attitude in the soaring architecture of the time reaching up to touch the sky like the spires of Santiago Cathedral itself – as if to connect heaven and earth. One finds it too in the dark silence of the little village churches along the Way (alas, too often locked today), where one can imagine one’s pilgrim predecessors resting for a while to pray in silent communion with the Eternal. One even recognises it in the cemeteries that surround those churches – a testimony of the faith of the past in the closeness of the living and the dead, and the hope of Everlasting Life. The Way is steeped in the past, yet one must realise that its importance is timeless.

Until one grasps this profoundly spiritual aspect of the Camino, one cannot understand the power the Way has over the pilgrim – nor why one might call it a metaphor for the ‘journey of life’ or a ‘journey to self’. For over a thousand years the road to Santiago de Compostela has been walked by many a weary pilgrim from every corner of the earth, and each one can attest that while it seems the Camino has changed little in the course of time, the stony road to Santiago has changed them in some indefinable way. 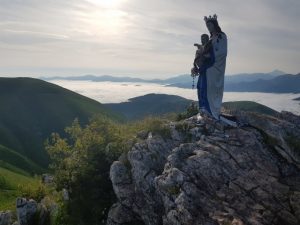 The Virgin watches over the pilgrims 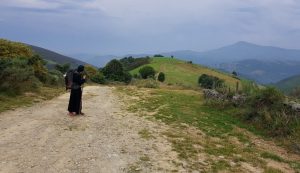 The stony Way of St James 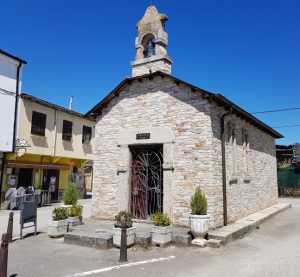 The little churches of the Camino 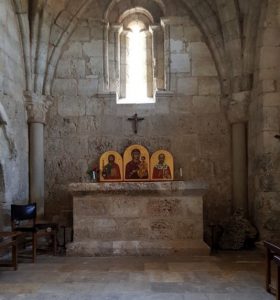 A quiet sanctuary to reflect and pray 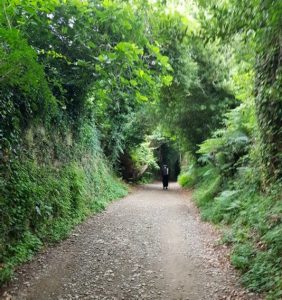 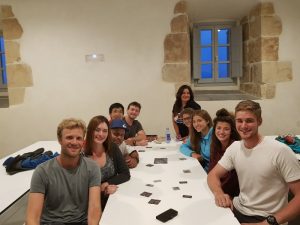 The fellowship of pilgrims

It is more than the introspection encouraged by the silence – so often found while walking in the rugged scenery of rural Spain – or the sense of community so quick- ly forged among persons of diverse tongues and backgrounds in the dining halls of the albergues along the route. Rather, it is found in the sense of penance and suffering that overshadows even the modern pilgrim with his ultralight backpack and solid footwear.

The Camino takes a physical toll on every pilgrim – testified by the well-stocked pharmacies one finds in every village! Such suffering does much to ennoble and deepen the human character. It teaches one the limits of human ability: the deepened sense of one’s own vulnerability and weakness opens one to the understanding and sympathy for the suffering of others. It is as if one looks within and sees what one can never grasp in the high-paced activity of daily life: the nothingness of self in the scheme of reality, and yet, simultaneously, the dignity and value of each individual, as an individual. Anyone who has walked the Way can tell a story of the unexpected kindness of a stranger in the hour of need – fitting testament, indeed, of the influence of the Camino to raise one above self.

The penitential aspect of a pilgrimage was not an end in itself for the ancient pilgrim. He sought a spiritual gain, namely, the intercession  of  the  Apostle  St  James, whose body is believed to lie in the Cathedral at Compostela. While there is no written record, tradition has it that St James the Apostle (called James the Greater, to distinguish him from the other Apostle James, who was probably smaller in stature) preached the Gospel in Spain shortly after the Ascension of Jesus into heaven.

The brother of the Apostle St John, named the ‘Son of Thunder’ by Jesus, St James was one of the first Apostles called at the beginning of Jesus’s ministry in Galilee. He was one of the three (Peter, James and John) whom Jesus chose to be with Him at the significant moments of that ministry, such as the raising to life of Jairus’s daughter. Scripture records, in the Acts of the Apostles, that he was martyred in 44AD by decapitation on the order of Herod Agrippa in the early persecution of the fledgling Church in Palestine. Tradition recounts further that his disciples, fearing the desecration of his body, removed it to Spain, where they buried it in Galicia (probably they travelled by ship along the busy trade routes of the Mediterranean Sea). The exact location of the tomb was subsequently lost after the collapse of the Roman Empire, the Barbarian invasion and the later conquest of Spain by the Moors. In the 9thC the tomb was rediscovered by aid of a supernatural revelation to a certain monk, Pelagius. 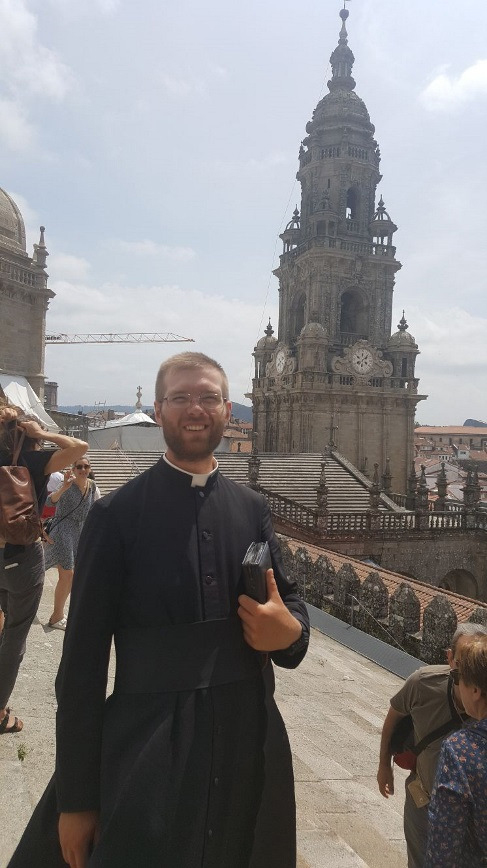 Journey’s end
While one may be tempted to dismiss tradition as unreliable, archaeological investigations of the 19th and 20th centuries have confirmed many details of the story upheld by tradition. For example, the original ossuary containing the bones of the Apostle dates from the Roman period of the 1stC. Further, a 19thC comparison of the bones of the ossuary with a bone fragment sent to the Bishop of Pistoia in Italy in the 12thC from Compostela found that they were from the same person. Interestingly, the fragment is from the mastoid process (at the junction of the neck and skull) and bears marks consistent with decapitation. The outcome of such academic and archaeological research was recognised by Pope Leo XIII in 1884, when he proclaimed the relics in Santiago to be those of St James in the Papal Bull, Deus Omnipotens. In any case, whether or not the relics are truly those of St James, the fact remains that the pilgrimage to Compostela is a pilgrimage made to honour the great Apostle and to seek his intercession and protection – even today.

The Apostle’s Feast Day is celebrated on 25 July, the day on which tradition has it that his body was buried in the north-eastern corner of Spain. This day is always celebrated with much pomp and festivity in Compostela (as it is in all of Spain as

the Patron Saint of the whole country). While the vigil of the feast and the day itself are the days of greatest celebration, the entire last fortnight of July is a time of festivity. The locals dress up for the occasion and music fills the air on every street corner. Fireworks and light displays are a feature in the plazas of the city. The feast day itself is marked a by a Solemn Mass – complete with the swinging of the botafumeiro, the largest incense burner in the world, so recognisable to veteran pilgrims.

Since 1122, whenever the feast day falls on a Sunday – at intervals of six, five, six, and eleven years – a Holy Year is declared. Last year, 2021, was a Holy Year, but Pope Francis extended the Holy Year to 2022 on account of the disruptions caused by the COVID-19 Pandemic. In a Holy Year, pilgrims who travel to Santiago and enter the Cathedral by the Puerta Santa (Holy Door – closed and walled up at other times) to visit the tomb of St James can gain a plenary indulgence (a plenary indulgence is the remission of the temporal punishment i.e. time spent in purgatory, due to one’s sins previously confessed and forgiven in the Sacrament of Penance). To gain this indulgence, the pilgrim must also spend sometime in prayer in the Cathedral, and receive the Sacraments of Penance and Communion within 14 days. The Holy Door is opened and closed in a special ceremony by the Archbishop of Santiago at the beginning and end of the Holy Year.

While not all pilgrims who walk the road to Santiago today may be familiar with the Catholic heritage of the pilgrimage of St James, perhaps some of the mystery may now be a little clearer. With the Australian borders opening up again, the opportunity to walk the Camino is once again a reality for many. Covid has changed many things and no doubt the logistical challenges faced by pilgrims on the Camino are now very different. Yet, somehow, The Way remains as it has been for so many years before it was popularly known around the world – even before it entered the pages of written history. Our feet still tread the same stony ground that countless pilgrims have walked before us, our minds take in the beauty and contemplate in silence, we form new friendships… The Way works its influence on us. It calls us deeper into the mystery of this journey of life that we all walk together. We cannot return unchanged.