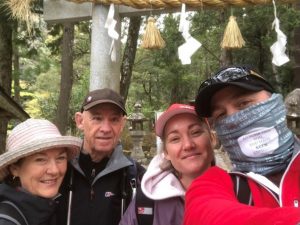 Delia and Tony with children, Libby and Chris

“JAPAN? Really?? For a walk in the mountains? Ten days? Yes, it would be great, Dad, but I’m too busy with work and there’s the wife and the kids… I couldn’t get away. So, no thanks.”

After this conversation with son Chris, I rang my daughter who is also married with four children and asked her the same question: “Would you like to come to Japan with me, Mum, and your brother in April 2019?”

That was early in December 2018. A week later, after the siblings had spoken to each other on the phone, they both called and agreed to walk the Kumano Kodo in Japan with their parents!

Delia and I had completed the Camino de Santiago the previous year, and we wanted a new experience. After some internet research, I contacted Raw Travel. They explained that even though the Kumano Kodo is short, it is much harder than the Camino Francés, particularly on the final day. However, feeling confident, I booked the trip, the flights and the travel insurance.

We started practice-walking in January near our home in Perth: to Kings Park every Sunday, up and down the Kokoda steps and Jacobs ladder, and a kilometre walk between each. We built up our strength until we could do the circuit four times. During the week, we did 5km walks with a back pack, adding weights as we got stronger. Next came Kalamunda hill – an hour to the top, and steep. 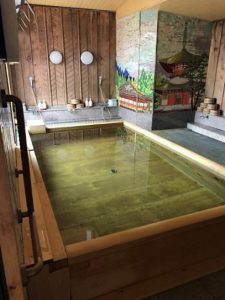 By March we could do Stage 1 of the Bibbulmun track, 20km from Kalamunda through the bush to Mundaring Weir. We decided then we were ready for the Kumano Kodo!

We arrived in Osaka at cherry blossom time in early April. We started with 3 days in Kyoto in a traditional ryokan with tatami mat floors and great Japanese toilets – the ‘bottom-flushing’ type. (How I wish we’d had one at home when the Covid-19 toilet paper panic was on!).

Raw Travel had given us excellent information books, but Chris hadn’t read much in preparation for the trip. He was apprehensive about the food and eating with hashi (chopsticks). But after a couple of days in Kyoto, he started to relax, and on our last night, he and I went out looking for dinner.

Not far from the ryokan was an alley with several small restaurants. For some reason Chris chose the most unlikely one … with no windows and a blue curtain hanging to the ground over the doorway. Inside, 8 people were sitting around a U-shaped counter. All eyes turned to us. “Kombanwa” said Chris. A surprised “Kombanwa” was the reply!

The super-friendly chef started giving us dishes and after three beers each, we were feeling great. Chris was showing the Raw Travel phrase book to the man beside him. Then he stood and said “Oishikatta” (that was delicious!) and held out some money. Everyone laughed. Using just a few words of Japanese made all the difference to our eating experience.

The next day, we were off to Mt Koyasan for our two-night stay in a Buddhist Monastery. After two trains and a cable car ride, we arrived on top of the mountain, home to many monasteries and one of the biggest and most beautiful cemeteries in all of Japan.

The monks were most welcoming, but when I put my case down on the verandah there was a flurry of activity. My case was grabbed and all the wheels thoroughly wiped clean before being handed back to me. We also had to remove our shoes before stepping on to the verandah – and put on the leather slippers they gave us. Later we were given special slippers for the toilet areas too. 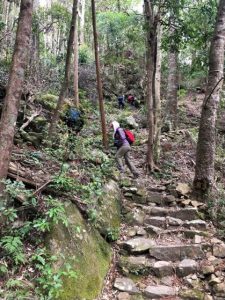 Up up ever upwards!

The rooms were beautiful, with tatami mats, no chairs and of course futons which a monk would lay out for us each night. In Kyoto at the ryokan we’d had our own bath, but here at the monastery we had an onsen. Around three of the walls there were low wooden seats with a wooden bucket beside and individual shower heads on the wall. The nightly ritual involved changing into a yukata before going to the onsen, then in a small change room removing the yukata, taking a small hand towel and proceeding through a door into the bath area, where there were often people already sitting in the hot water.

At this point we had to sit naked on a small stool, while soaping ourselves all over, then use the flexible shower head and throw buckets of water over ourselves until we were as clean as we could be. The whole process took about five minutes! Only after this, could we walk to the onsen, step in and sit down, placing our folded towels on our heads. We managed, despite some embarrassment. The women’s onsen was a little smaller because the monastery housed mainly monks. Make sure you go into the correct onsen as it can be embarrassing—as we found out—to be sitting in the wrong one when the opposite sex comes in!

After Mount Koyosan, we travelled south by cable car and train to the small town of Kii Tanabe. At the tourist bureau there, we were given more information about the Kumano and the keys to our accommodation for the night, a wonderful traditional Japanese double story house, very plain and simple, again with Tatami mat floors and futon beds.

The next day at 8.30am we took a 40-minute bus ride to the beginning of the trail at Takijiri-oji. There were about 16 other walkers on the bus but they quickly dispersed along the trail so, within 15 minutes, we were alone again, struggling up the forested hill in front of us.

The track in many parts was covered in exposed tree roots as rain had washed the top soil away over the years. We had to be careful where we placed our feet. It was about four kilometres up, up and up before we reached Takahara village known as Kiri no Sato (‘village in the mist’) but we did not stop there as we still had 14kms to go. At 4pm we reached our accommodation. With not a lot of places to stay on the Kumano, it is probably booked out months ahead. But with fewer than a hundred people a day walking the Kumano, we never experienced the crowds that we found on the Spanish Camino. 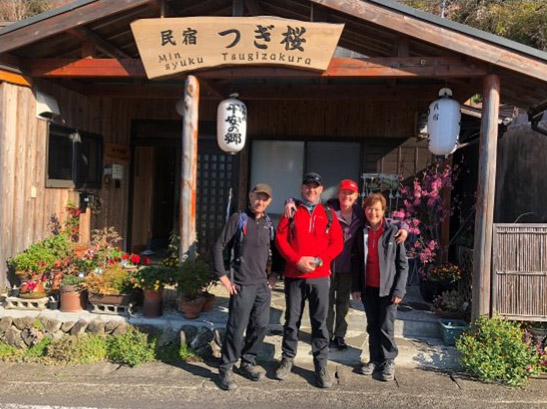 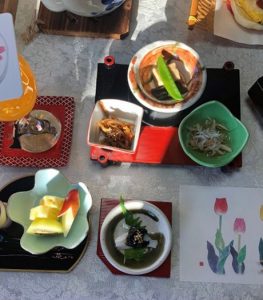 That night, our host Yuba-san and his wife provided the most wonderful Kai Seki (high end degustation) meal. Later, as we lay in our futon beds on the tatami, I felt like I was in heaven. In the morning, following a fantastic traditional breakfast, we were given our bento lunch boxes and waved off by our hosts. The day’s walk through the forest to Hongu village was 22kms, Grade 5. Our Raw Travel map books were easy to read and there were signs on the path. At the lunch break, we struggled to eat all the food in our bento boxes even though they were delicious. 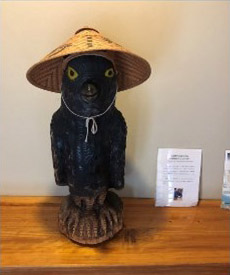 A small carved wooden Yatagarasu, the three-legged crow, the symbol of the Kumano

Hongu village is the site of Kumano Hongu Taisha, one of the three grand shrines on the Kumano Kodo. It is here at the Heritage Centre that we received our dual Camino/Kumano certificates. The staff gathered together to give us a cheer. A special experience. To honour the occasion, I bought a small carved wooden Yatagarasu, the three-legged crow, the symbol of the Kumano (see left).

From here, we took the bus to our next accommodation, Kawayu Onsen on the Oto river. The view was beautiful, and our indoor onsen opened out onto the sandy river bed where you could dig your own little onsen and relax in the warm water, without clothes if you wished.

With our bento lunch boxes next morning, we took another bus to the trail head at Ukegawa. It was to be a short day with only thirteen kilometres from Hongu to Koguchi through the forest with a suggested time of 5 hours, a Grade 4/5 walk. At the 5km mark in the trail, the impressive Hyakken-gura lookout surprised us with a lovely panoramic view of the 3600 peaks of the Kumano. In Japan, as in Europe, people have been making this pilgrimage between shrines for over 1000 years.

At Koguchi, we phoned Takata Greenland, our accommodation on the Takata river. They came and picked us up in their bus – a 20-minute trip. By now the walk was taking its toll on our daughter Libby’s knees. She was struggling with the track and its high and very uneven steps. So she decided not to walk the last day to Nachi Taisha shrine, but catch the bus instead. My wife chose to accompany her. 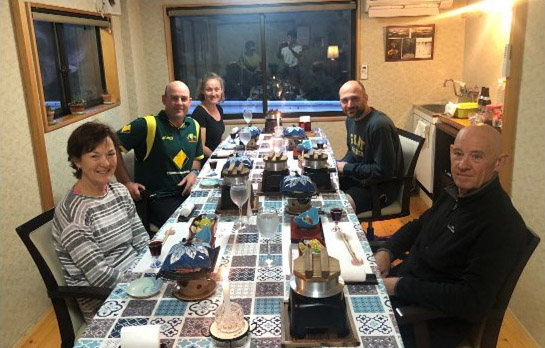 The final day proved to be the hardest, particularly the first 5km which climbs to 800 metres. It is called the body-breaking slope and seems to go on forever. Although it is only 14km, with a suggested time of 6-8 hours, it is Grade 5 – definitely not a walk in the park. I was thankful we had trained so much on our few hills back in Perth. The rough stone steps were uneven and at times slippery. O’Cebreiro on the Camino Francés was easy by comparison. 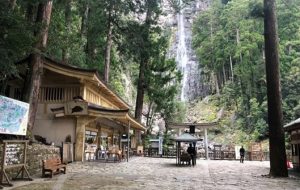 We came out of the forest around 4pm and found the stone steps snaking down through the trees. In the distance we could see the famous Nachi no otaki waterfall, 133 metres tall and 13 wide, the tallest waterfall in Japan. We looked in amazement at the brightly-coloured Nachi Taisha shrine, then the ancient Seiganto-ji, a wonderful wooden Buddhist temple founded in 5th century.

Our final night was at Mitaki Sanso. It was great to catch up with other walkers we’d seen on the trail, one a Japanese girl from Hokkaido, who we still correspond with today.

It was sad to leave the Kumano Kodo the next day and head back to Perth. We’re already thinking of returning, perhaps next time to Japan’s Shikoku Island.