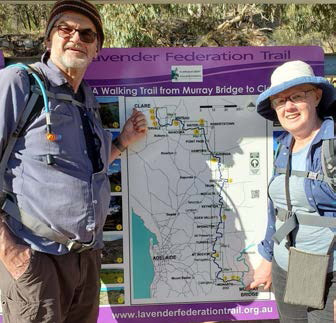 With Covid placing severe restrictions on overseas and even interstate travel and bush walking, my wife Lyn and I have turned our bush walking focus to long distance walks close to home. Through bush walking friends we were introduced to the Lavender Federation Trail (LFT).

Located on the lands of the Kaurna, Peramangk and Ngadjuri peoples this trail celebrates 100 years since the 1901 Federation of Australia and the memory of Terry Lavender OAM, whose vision established this trail from Murray Bridge to Clare. The first section of the trail from Murray Bridge to Mount Beevor near Harrogate opened in 2000. The final stage to Clare opened on 5 May 2018.

It’s a linear walking trail through diverse countryside traversing the eastern flanks of the Mt Lofty Ranges. It begins at Murray Bridge and traverses the Barossa, Goyder, Mid North and the Clare Valley regions to Clare. The walk is 325k and takes you through townships such as Tungkillo, Springton, Dutton, Eudunda, Point Pass, Waterloo, Manoora, Mintaro and Watervale. Loop trails are accessed from Tungkillo, Mount Pleasant, Springton, Eden Valley, Moculta and Point Pass. Spur trails connect to Callington, Keyneton, Truro and Robertstown. The main trail has connecting trails providing an additional 96k. The LFT intersects with the Kidman, Mawson, Heysen and Riesling Trails. So the LFT can lead you along multiple path ways and landscapes. The trail network has been designed, constructed and main tained entirely by volunteers. Signage along the way is frequent and reliable. There’s little chance of getting lost. It offers a range of views from high ridges and peaks that afford impressive panoramas, to scenic gorges and rock pools. For the most part the trail takes you across rolling farmland, dirt tracks and dusty roads. 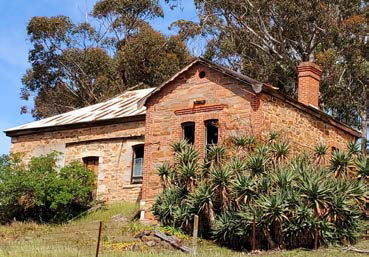 One of the many deserted houses along the trail 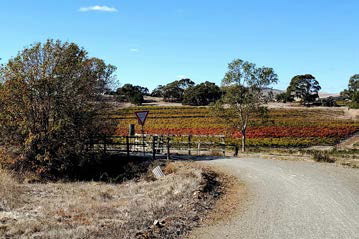 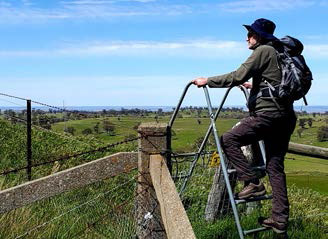 One the many stiles over fences on private properties 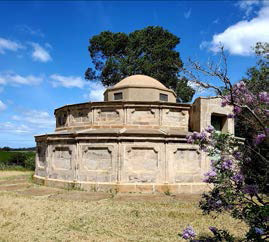 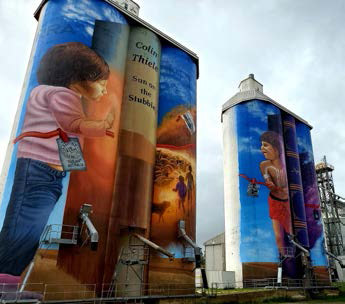 I’d agree with that. Some reasonable level of fitness prior to starting it would be beneficial.

Lyn and I completed our first section of the trail around May 2020. At the time of writing this we’ve just completed it, not entirely in sequential order.

Sections closer to Adelaide, such as immediately north of Murray Bridge, we’ve completed as single day walks. Further afield, we’ve completed longer sections over multiple days. It’s these multiple day sections that give more of a feel for a Camino in the sense of routinely getting into a long distance walking pattern over consecutive days, along with the enhanced feeling of absorbing the natural landscape which you’re slowly passing through, not to mention the reacquaintance with sore muscles and joints by day’s end.

We have walked most sections with the company of at least 2-3 bushwalking friends, thus giving a more collegial feel to the bushwalking experience. One of the joys of this trail for me is that though I’m well acquainted with a number of the townships along the route, I have, up until embarking on the LFT, been mostly unacquainted with the ‘off the beaten track’ landscapes. The chance to absorb this new scenery, and what it has revealed to me about our state, its geography and culture, has been quite illuminating.

Some of the highlights of the LFT have included: 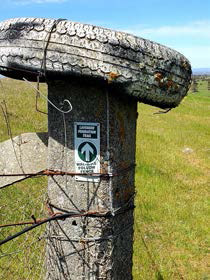 The trail is well signposted with this distinctive arrow 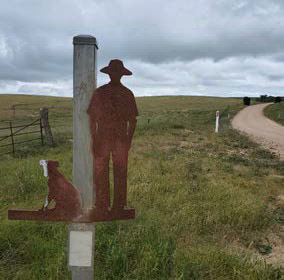 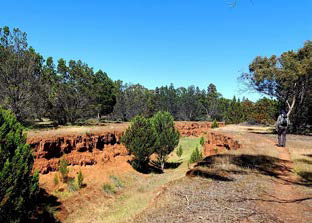 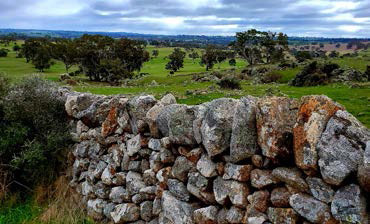 An example of the dry stone fences along the way 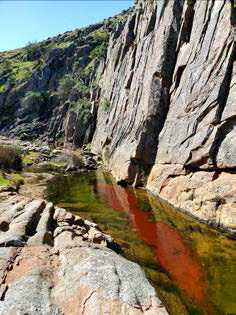 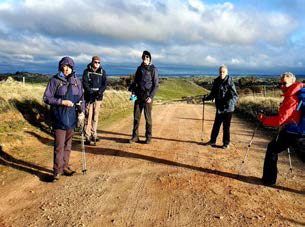 Our walking companions, hills near Tungkillo 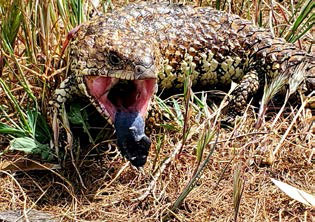 Beautiful flora and fauna accompanied us along the way, crops of wheat, barley, beans, and of course, vines, not to mention large paddocks of canola offering massive carpets of bright yellow to the already vivid landscape. Flocks of sheep, with a few alpacas, and cattle, were regular companions, not to mention mobs of roos, several blue tongue lizards, one enquiring fox, and one unwelcome brown snake. Old farm buildings reminded us of earlier European settlement, along with the beautiful dry stone fences, however of more importance to me was the chance to pause in quiet gorges, alongside water courses, and reflect upon the prior habitation and ownership of these ancient lands by indigenous peoples over tens of thousands of years.

The LFT is vastly different to a traditional European Camino. Unlike the Camino Francés, the LFT is a brand new, little-walked track. Its paths have not yet been well marked out by human footprint. We encountered very few LFT walkers over our days on the trail. So the LFT doesn’t have that sense of human community that you find on a traditional Camino, save for the company of those you walk with. Unlike Francés, and all those other Caminos, with their stories of St James, it has not had anywhere near enough time to develop its own traditions and long-held stories, whatever those stories may be come. It hasn’t had time to acquire the statues and other iconography that one finds in Spain and else where, and perhaps it never will. There’s no cathedral square to gather in and celebrate at the end, just a signpost and map beside a car park, in Clare, to tell that you’ve made it. Per haps the local pub will have to do for a celebration. But, nonetheless, it’s a beautiful walk which, like an historic Camino, can, through its changing natural landscapes, give us cause to pause and spiritually reflect in an uncluttered and peaceful way, and to consider life at a simpler, calmer pace.