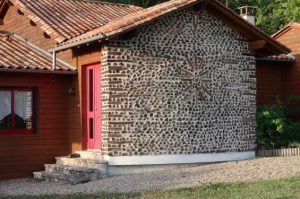 Amazing stonework in The Netherlands

What on earth would possess two perfectly sane, rational, normal human beings to walk from Amsterdam to Santiago de Compostela? Perhaps we were not as normal or as rational as we thought we were, but… who cares.

The history behind this incredibly long pilgrimage is our meeting with Heinrich, while walking the Via de la Plata in 2015. This dude had walked out from his home in Frederikshavn in Denmark, to Santiago. This inspired us to do something similar. Our plans to follow a similar path to Heinrich kept getting stuck around the 90-day visa issue. None of the countries wanted to speak to us, until finally Hedley got the Spanish consulate to at least talk to us. Her advice was to make sure we got into Spain within the 90 days, and apply for an extension. So reworking our possibilities, we could see this was possible by starting from Amsterdam. So there’s the simple answer to the starting point!

We had agreed to ‘wing it’ on this little adventure and just work day-to-day to see how far we walked, where we would stay, etc. Our plan was to wild-camp as much as possible, firstly, because we enjoy it and secondly, it saves a bit of money. We soon discovered that camping in the Netherlands, Belgium and Luxembourg is strictly forbidden and comes with a heavy fine. Ho hum… but they do have many official campgrounds and some farmers allow you to camp on their property, but none of it is cheap. 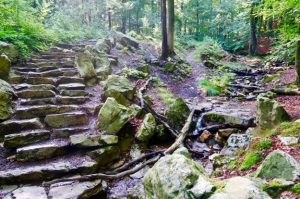 The stunning forests of Belgium and Luxembourg

Our route took us pretty much in a straight line to the French border. The Netherlands surprised us with so much forest and the most beautiful paths to follow going in all sorts of directions, allowing us many options to continue on the way. There are many regular walking trails and several Pelgrimsweg. We found plenty of camping places and spent our days in the forest, walking through some ancient and beautiful historical areas. Some days we even saw Camino shells and yellow arrows, but they were random and seemed to not follow anywhere in particular, or they kept trying to take us East, which would have been fine, had we not been trying to make it to Spain in the 90 days frame! Being late July, it was incredibly hot and we enjoyed many a farmer’s sprinkler as we passed. We took a couple of rest days in Maastricht as The Netherlands experienced two record high +40° days in a row. Many remarked ‘you are Australian, you are used to this heat!’ And we’re smart enough not to walk in it!

Departing The Netherlands, we headed into Belgium joined by a Belgian friend, Loïc, we met on the Bibbulmun Track in WA, and he continued with us for two days. A few days previously, we had ‘played’ on the Belgium border at a historical Benedictine Abbey, but we now walked through in earnest. The forest got a richer green and again a lot of history and waterways. We encountered many vending machines that sold everything from meat and vegetables to fruit and eggs. We walked along old limestone cliffs and in through tunnels, all of it just so green and beautiful in the middle of summer. 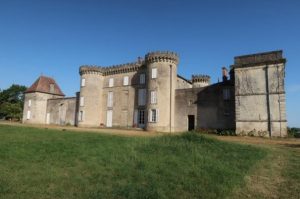 It was only a few days later we crossed the border into Luxembourg. For Europeans, this crossing of borders is normal, but for Australians who can travel for days and remain in the same state, just crossing into different countries is pretty cool. And so we continue through managed forest, deer hunting grounds and funky little villages, each with their own little quirks. Beautiful gardens, because water scarcity isn’t an issue, and meeting lots of people who are convinced we are crazy, but also inspired by our journey. In Luxembourg, the hills become much steeper than in Belgium. We finally reach Luxembourg city which has the stunning and ancient old city and the new city. We find the Notre Dame Cathedral in the centre of the old city and choose that for our credencial stamp for the day. We finally reach Schengen where the Schengen agreement was signed and is our final day in Luxembourg, before we cross briefly into Germany for a few kms then on into France. Little did we know what lay ahead.

It is August, and if you travelling through here, don’t do it in August. The French in this part of France go on holidays for the month. Few people are home, the bars, hotels, restaurants, cafes are all closed for the entirety of the month. This includes McDonalds and Subway! And so, France gave us the challenge of finding food to eat and even water to drink! 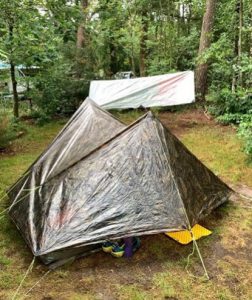 The French countryside is stunning and our route takes us through beautiful forest and we walk for days along the canals. The ancient buildings and history blow you away. The cathedral in Toul is well worth a visit with its beautiful architecture. This area is also Joan of Arc territory and we see much about her throughout the area. We continue to camp where possible, but it is illegal to camp in the forest in France and you can camp on private property with the owner’s permission. But, the owners are on holidays! Getting food was our big issue with everything closed. We would occasionally find a bakery or small supermarket open for a couple of hours a day, but it was tough. Tougher still was getting water. Churches and cemeteries, the usual spots to obtain water, had the water cut off. We literally knocked on doors and talked to people we did see to get water.

After toughing out these conditions for a couple of weeks, we reached the town of Langres. We had begun to check ahead for places being open by calling during what was listed as their opening hours. Vezeley, our intended route to SJPDP, was 157kms away and there were few towns between. After calling with no answers we decided to catch 2 trains and a bus to reach Vezeley. Near foodless and, more concerning, waterless, we felt our safety and sanity were more important. Besides, we were still trying to get inside Spain before the 90 days was up!

We rested in Vezelay, and though our food and water issues improved from here, they were still quite hit and miss. We found many refuges that supplied food, either by stocking the refuge cupboard, where you would pay for the food and cook your own, or many had locals who would bring food to the refuge. We got a weekend holiday with friends in Nevers, which was a welcome break in France. We met these two beautiful people on the Camino Francés in 2014. They had jumped off the hamster wheel of life for a break and never got back on after walking the Camino. We hired a boat and cruised the canals for the weekend. Bliss! 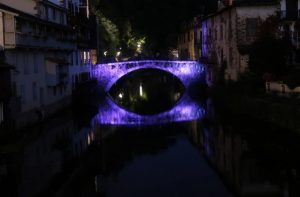 Night view of the bridge over the River Nive, St-Jean-Pied-de-Port 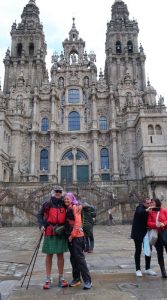 Finally, in the last few days of September, we hit that last stretch into SJPDP and I admit to losing it as we walked in. Knowing that all the issues of the last month in France were behind us and I was ‘home’ on my favourite Camino. The Francés, despite being the most popular, remains my biggest love of them all.

We deliberately had our timing to hope- fully see snow as O’Cebreiro and Foncebadon had both had snow in early October 2018, but it was not to be in 2019. Definitely on the home stretch of our pilgrimage, and just so in love with everything here. Far more crowded than we expected at this time of year, we found most pilgrims were ‘multiple offenders’ like us. We deliberately chose the Valcarlos route and took many different paths we hadn’t walked before when alternatives were offered. France certainly scarred us and the Camino in Spain provided the healing we needed on this very long walk.

So, to the visa issue. We made it into Spain in 85 days. Phew! The immigration office tried to help but there were issues for the extension that the Spanish couldn’t meet deadlines for. They simply said, “Go and walk, you’ll be ok.” But I’m here illegally! The response was, “So are many others, and many overstayers leave Spain every day. As long as you’re leaving, we don’t care. Just don’t commit a crime!” They were right! My passport was stamped when I left, no questions asked. I don’t know if that’s good advice or not.

Our arrival into Santiago was incredibly emotional. It was a very, very long walk, and our relationship took some tests and yet we endured and survived.
Until our next Camino… 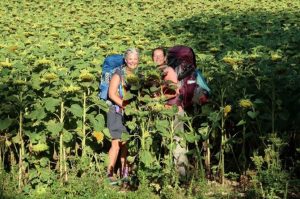