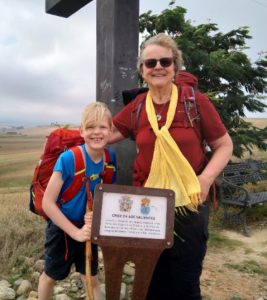 In 1999 I walked my first Camino and fell madly in love twice. First with the Dutchman who is now my husband, then with the country itself. And Spain has been the third person in our relationship ever since.

Now, some 20 years after that first time, I decided to share my love of the Camino and Spain with my eldest grandchild who was just shy of turning eight. Lucas is the eldest of four boys, energetic and curious, and with a sponge-like capacity to take in the world around him. The idea struck me while walking the Camino Aragonés when I was struggling with short daily distances and lots of rest stops. “A child could do better than this!” I berated myself angrily, at which point I had one of those “Aha!” moments and the idea of an ‘abuela-Camino’ was born.

Having convinced his parents to lend me their precious firstborn for three weeks, I also let them put the idea to him in case he felt uncomfortable refusing me. He was eager but sensibly cautious, asking how he would understand what people were saying and whether his closest brother in age wouldn’t feel left out. Once reassured on these two points, he took to the planning with gusto and over the next few months we assembled all his gear, principally a junior 18L Osprey and some quality runners which came as early birthday presents. 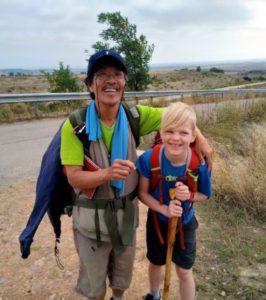 He undertook several 10km hikes around home and one long bush walk with me while staying with his 5 year old brother Max. To keep Max busy, my husband Rob made up a picnic of salad rolls which they then took up the bush and set up as a roadside stall. I wish I’d taken a photo of the look on Lucas’ face as we rounded the corner and saw lunch waiting for us! There are now lots of these impromptu roadside refreshment stalls along the CF, now duly called ‘Max Cafés’.

The day of departure came around and I wondered about that 27-hour flight with an active 7 year old. Luckily we both slept quite a bit on the outward journey, which was just as well as we got straight onto a bus to Logroño, then another to Estella, our starting point. From the moment we arrived at Barajas, my fellow pilgrim’s head was on turbo-swivel as he took in his new surroundings. An inaugural bocadillo and Colacao tided him over till we arrived in Estella where I’d booked a recovery night in a hostal where we ate dinner, showered and collapsed into bed to sleep for 13 hours.

We moved into the albergue municipal for our official first night of walking and right from the start, Lucas showed his true colours, getting into conversations with anyone who was interested, which many people were as he was the only child pilgrim we saw in two weeks of walking. People talked to him openly and he responded in kind. On that first night he had the idea of getting daily sellos in his journal, so I said “OK, go and ask the hospitalero!” He hesitated, then went and asked: “Sello, por favor,” which was his first foray into Spanish.

My plan was to average 12-15kms a day which is very do-able on the CF nowadays and this section had the added advantage of passing lots of places of family historical interest, such as where his Mum had her 21st birthday with us while we were hospitaleros in Navarrete in 2001 and where Rob and I met in 1999. For anybody interested, our itinerary was Estella, Villamayor de Monjardin, Los Arcos, Torres del Rio, Viana, Logroño, Navarrete, Nájera, Cirueña, Grañón, Belorado, Villafranca Montes de Oca, Agés, Orbaneja, Burgos. 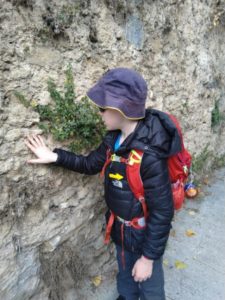 Something I noticed was that generally speaking, men were more interested in engaging with Lucas than women. Given that statistically there are more women on the Camino than men these days, I wondered whether the women were all too busy getting away from family responsibilities to want to chat to a 7 year old?  Coming from an all-boy family I think Lucas felt the need for male company at times but when he found it in the form of two lovely young men – Liam from the UK and Matt from Canada – who played Connect 4 with him in the albergue and taught him how to tie self-tightening shoelaces – he was really saddened when we had to part company as I was simply unable to keep up with two fit 20-somethings. It was an exact repeat of partings I’ve had many times on my Caminos and almost always for the same reason – my inability to keep up!

We talked – my, how we talked! It really is a rare and special privilege to have had the chance to see the wonder that is the Camino through such fresh eyes. We talked about the little birds that often seemed to be showing us the way, hopping ahead for a few metres at a time, which led to the story of St Francis of Assisi who walked to Santiago barefoot and coincidentally, whose picture we found on a holy card lying on the pavement the following day! We looked at the grape vines, trees and plants, checking out the wonderfully large fig leaves which I commented were once used to cover the private parts of statues in the ‘olden days’. Sometime later in a bar we were sitting beneath a couple of cherubic statuettes when he glanced up and observed that they could use some fig leaves! A couple of heavy rain showers brought out an array of slugs, snails and sundry other mini-beasts, all requiring close examination.

Lucas kept a journal which he wrote whenever there was waiting time. Among his writing and illustrations (many involving food and eating noises) there are the entries that other people wrote – Irish Mick who wrote the Celtic blessing in phonetic Gaelic for him, Italian Sergio who wrote to his ‘piccolo amico’ while we waited for our shared machine-load of washing…

Then there was Austrian Andrea who had a magic electrical insect bite zapper we were grateful for, Leah who shared a lot of her picnic dinner when I’d badly misjudged his hunger level one night, Raoul from Barcelona who joked that he’d kidnap him for a million-euro ransom… it got to the point when, sitting on a rock at the top of a hill for a break, a gorgeous, leggy French girl appeared with a delighted cry of: “Lucas!” We established that we’d never met but that her friend had told her to look out for the cute, blonde mini-pilgrim walking with his grandmother. Fame at last! 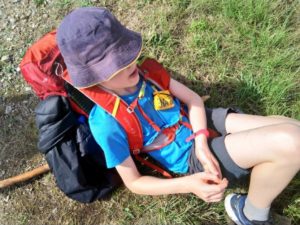 Growing up in a secular world, Lucas was fascinated by churches and all their details. “What are these buildings for?” He asked to go to a Mass, which I said would require a siesta as it wasn’t till 8pm, so he climbed into his bunk and slept. At Mass, he loved giving the sign of peace, gravely shaking hands with the surrounding congregation members, then asked me why everyone was lining up afterwards. Defeated by trying to explain the mysteries of the transubstantiation of the body and blood of Christ on the spot, I whispered they were going up to get “a biscuit and a sip of wine”. “Do even kids get the wine?” he asked, wide-eyed.

Arriving in Viana just in time for the running of the cows (still fairly terrifying) with all the brass bands, gigantic dancing figures and everyone dressed in red and white, we jostled along in the crowd and Lucas asked if we could have an ice-cream cone. I gave him 5€ and said “Go for it… A few minutes later he returned, triumphant, with two ice-creams AND the right change!

The first 2-3 days we found the final couple of kilometres were hard on tired legs, but then we discovered Bi-Frutas, those vitamin-enriched fruit drinks in a box that we decided were excellent for eliminating whingeing. In a later skype call home, his Dad put in an order for the recipe!

I’ve been told I run children on a fairly long leash but whenever I felt a twinge of worry about a height, narrowness or other possible danger, I’d just ask him: “What’s my main job in life right now?” “Getting me home in one piece – or Mum will kill you!”

I always carry a few tiny brass kangaroo pins to give people who have been particularly helpful to me. Lucas loved this idea and sometimes asked me whether someone’s kindness merited a pin. He loves all symbolism, proudly wearing a yellow arrow badge on his jacket and a shell on his pack “so that people will know I’m a pilgrim from the front and the back.”

One of the many lovely surprises about travelling with Lucas was his thirst for stories. We all need stories. They teach us about our place in the world and possible alternatives. He wanted to hear all about my childhood, my years at boarding school (which he calls ‘boring school’), family history stories like that of his birth (of course!) when I was promoted to the rank of grandmother, and any legends or stories of old like that of the chickens of Santo Domingo. He learnt that legend off by heart until he could tell it to people who didn’t know it. Then we received the exciting news of the birth of another cousin called Hugo James – Hugo from the boy in the Santo Domingo legend and James for St James – the new baby was surely named after Lucas’s Camino?

Being so blonde in Spain involved a fair bit of cheek-pinching by other abuelas and many instances of spontaneous generosity. In one bar we stayed in, pasta was not on the menu. Seeing his face fall, the barmaid at once said she would make him some specially. In that same bar, he went to do the Sudoku in the local paper and was given a gift biro… the charmed life of the pint-sized pilgrim. “They all love me here, Nin!” And indeed they did. 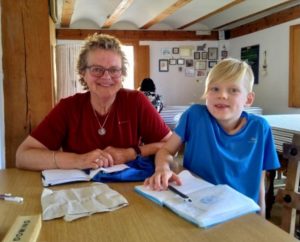 Arriving in Burgos, we had already had the sense of counting down the days left of walking. A long visit to the Museum of Human Evolution was on the list and did not disappoint. The waxwork figures of Neolithic man through the ages, comparing evolving brain size with the introduction of meat to the diet, was an interesting observation. After that, it was souvenir buying, including a chess set bought with birthday money after learning how to play in an albergue, and a slap-up lunch with Rob who drove over from his Moratinos house-sitting gig to celebrate with us.

Some elements of the Camino are universal. I watched Lucas make friends and learn from them, then lose them. I watched him learn to take responsibility for the simple chores of life, like laundry. I saw him reach out to help – mainly to me – when I missed signage anywhere. Whether you’re 7 or 70 – it’s a great leveller.

To anyone considering a Camino with a child, I would offer: Choose your child well (old enough to carry own gear as well as do the walking); Be familiar with where you plan to walk; Tailor your Camino (ours was 14 days of 12-15kms) on the CF; Keep a journal each (for use in idle times as well as the end result); Include lots of breaks at interest points along the way. Relax and enjoy the great company!