Most people can remember the first time they heard about the Camino. For me it was in 1992 when visiting an old friend in England who was writing a novel about a woman walking an ancient medieval pilgrimage across Spain. She was planning a road trip to trace the route of the Camino Francés as research for the book. I was at once attracted to the idea of walking across Spain, a country I had lived in as a teenager. I was born in Venezuela but had forgotten most of my Spanish after being sent to English boarding school and I imagined reviving the language I grew up with. I love old buildings and churches and enjoyed walking, at least in the gentle sense of a couple of hours’ rambling at a time. The yearning for the Camino – even though I had so little notion of what it really meant – was growing stronger.

As a working mother of four teenagers living on a few acres with a menagerie of animals, I often felt like the title of a feminist book in the 1970s called ‘Brian’s Wife, Jenny’s Mum’, someone whose only identity was her relationship to others. I never imagined being able to extract the necessary funds from the family’s consolidated revenue to take off travelling on my own, but they say the Saint works in mysterious ways. Out of the blue I received a cheque for AU$1500 from a dear aunt in Devon. It was a gift for me to spend on myself because she suspected I usually spent what she sent on the children. I stashed the cheque in my RAM account (‘Running Away Money’ as the Mitford sisters called it) and started researching airfares.

My first Camino was from Roncesvalles to Santiago in 1999. There was little information available as the internet was in its infancy and the only books I could find were by Paulo Coelho and Shirley Maclaine (neither of which I read) and Nicholas Luard’s ‘The Field of the Star’, which I did.

The choice of Roncesvalles as a starting point was twofold – firstly to avoid that first day of crossing the Pyrenees and secondly to avoid having to change francs back into pesetas, which is a quaintly historical footnote these days. Thanks to the CSJ guidebook I was slightly prepared, although ignorance and thrift meant that much of my kit was inappropriate.

I was fortunate enough to get in touch with a university lecturer from Helsinki who sent some very useful answers to my many questions. I was asking about traveller’s cheques and “how much is considered a reasonable donation in the refugios”? His most reassuring piece of advice was: “It’s natural that you worry about not being able to undertake the walk, but I assure you that pretty much anyone can do it – as long as you don’t try to break any records.” He said “There are surprising numbers of pensioners walking – people in their 60s – fat Americans, middle-aged German businessmen, Italian housewives and even some beer-oriented Finnish students with no shoulders at all…”

After much research and advice, I bought a pair of Rockport boots with medium ankle support. These I wore to meet my parents for lunch in the city and I remember trying to gauge their response. I thought they may disapprove of me leaving the family for eight weeks to go off on my own but in fact they were fully supportive of my choices.

I scoured the ‘Under $100’ column in the local paper for weeks and finally struck gold – a brand-new hiking backpack bought by a woman planning to walk Cradle Mountain before finding out she was pregnant.

I never contemplated walking poles as they weren’t very common then and I thought ‘pilgrim sticks’ looked incredibly pretentious—as though people were dressing up in pilgrim fancy dress. When I think how essential my poles have become on Caminos ever since it makes me smile. All my choices were made by trial and error and very basic research – often in the library! Now there’s a
novel concept! 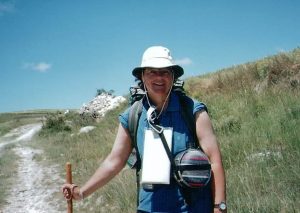 Ines with her useless 2.5 litre canteen

Other useless Items I took were a huge round 2.5-litre water canteen and heavy cotton trousers that completely wore out by Torres del Rio! I invested in a Swiss Army knife and in those pre-smartphone days, I carried a Maglite and camera.

I didn’t have much time for any extra training… in the words of the song, it was ’now or never‘ and after celebrating my eldest son’s 21st birthday at home, I headed for the airport straight after returning the hired glasses. 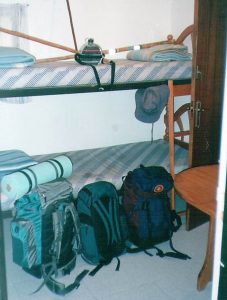 The smallest albergue ever – one bunk bed at Uterga

Having eight weeks off work took some wangling and meant I had to go during the July mid-year break. Not ideal weather-wise but better than nothing. My workmates and fellow students were intrigued by my plans. They wrote a swag of farewell cards which showed a remarkable understanding of what lay ahead of me, given how relatively unknown it all was back then.

From the light-hearted:
“Inés is travelling off to Spain,
She’s not taking a bus or catching a train,
But trusting her own two feet
To follow St James on his retreat.
To care for her feet so she sees all the thrills,
She’s buying French and not Spanish espadrilles!”

To possibly the most moving:
“Every step we take in our lives adds to the inner spirit that makes us who we are. We have a responsibility to nurture that inner spirit. Often it demands something special to take us to a new step on our pathway. Inés, you have answered your inner call. May it be one of your most treasured steps. A time of nurture to your spirit and a time of precious solitude. Each step you take will bring you to a special turning-point you have yet to discover, on the journey to the rest of your life.”

And since I met the man who is now my husband on that Camino in Belorado, it was indeed the turning-point on the journey to the rest of my life. 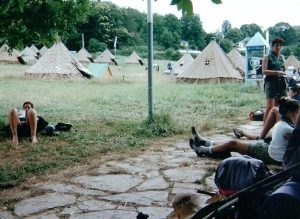 Army tents pitched at Triacastela for the overflow

I remember beginning my journal on the plane to Madrid and putting the words of Robert Frost on the first page – “and I have promises to keep, and miles to walk before I sleep”. I wrote that I was really apprehensive about what I had undertaken.

At Barajas I caught a taxi to the station and was delighted to meet a taxi-driver who was familiar with the Camino. He told me his mother’s name was also Inés, that my Spanish was excellent (a lie!) and that all you need for the Camino is strength, faith and luck.

I took the train straight to Pamplona and set off at about 11pm to find a pension listed in the CSJ guide. It had closed down. Feeling weepy with tiredness, I asked a young girl where I could stay cheaply nearby and she took me to the nearest bar which rented rooms upstairs. Being Saturday night, the noise was considerable but I slept well.

By Larrasoaña I was asking where to buy those wonderfully useful pilgrim poles and at once felt more stable walking on the muddy paths. I quickly got the hang of walk – shower – laundry – eat – sleep. My Spanish improved. I sent two parcels of excess baggage home to Australia at great expense. And I smeared my feet with lanolin each morning and never had a blister on the way.

Then I met Rob. My world tilted. I managed daily distances I would never have thought possible. Our Camino family included Larry (UK), Ori (Israel), Phillipe (France) and Steffen (Germany). We are still in touch with all of them. I lost 9kgs. 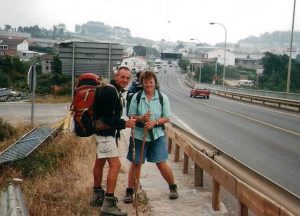 This was meant to be a break from my normal routine. I was certainly not on the lookout for a new man. (If so, I’d have chosen somewhere that didn’t involve wearing shorts and hiking boots!) Rob had a good job that he loved, two teenage children and an ex-wife in Holland. I had left behind a family including four teenagers and a not very rewarding job in Australia. We walked and talked. About languages, music, families, our children, books, philosophy, love, Steiner teaching, politics. We parted at Finisterre for Rob to take the train back to Amsterdam. The following day I caught the bus back to Santiago and was amazed to find him standing at the bus stop. “How did you know which bus I’d be on?” I asked. “I just met all of them,” he replied.

I think that was the turning-point. Nineteen years and two lots of emigration later we are settled in Australia. We return to Spain almost annually. We spent the whole of 2001 volunteering in albergues on the CF and Portugués. We have done numerous other Caminos, both together and separately, including the Aragonés, the Portugués from Tui and to Finisterre, but mainly our beloved Camino Francés. In difficult times our default position is to walk: on the deaths of my parents; when Rob was made redundant. Or to celebrate our marriage in 2015. The Camino is intricately woven into the fabric of our lives. 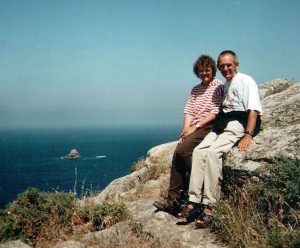 It’s interesting that the arrival at the shrine or ‘goal’ of the pilgrimage does not feature as a key stage. You get lost… and then you return home, a changed and different person. Then begins the hard part – the re-adjustment to what we laughingly call ‘normal life’. The urge to throw stuff out. The need to keep walking every day. The rearranging of priorities. The life that goes on after the yellow arrows have stopped. But those are stories for another day.

Note: I think the seven stages here are taken from The Art of Pilgrimage by Phil Cousineau. However, I have used a slightly different set of stages which I heard in a talk given by a pilgrim priest.